That's because I grew up in the 1970s, when disaster movies fornicated freely with all-star casts and state-of-the-art special effects to deliver orgasms of simulated viewing delight to audience members. Of course, this was long before the era of 24-hour news networks and the internet, so all I knew about natural disasters what was the local newspapers, my parents, and personal experience had taught me, namely, that they were all bad and life-threatening.

Yet the movie equivalents were utterly fascinating because they ventured into virgin territory, which may be why they remain so vivid in my memory, and perhaps make recent efforts like this week's San Andreas pale by comparison. One in particular will always hold a special place in my heart. Early one February morning in 1971, I was awakened by a canvas painting falling off the wall onto my bed. Measuring 6.5 on the Richter Scale, the Sylmar earthquake killed some 64 people, caused widespread damage throughout Los Angeles, and left a permanent scar on my psyche.

I became somewhat obsessed with earthquakes, reading every book in the school library on the subject (there were only a few), and even writing a fictional account of an earthquake leveling the school I attended. Needless to say, the 1974 film Earthquake filled me with anticipation and dread. I saw it at the Chinese Theatre in Hollywood, which was outfitted with the Sensurround process, intended to enhance the low-frequency sounds. (Management also installed netting beneath a large chandelier in the main auditorium, "just in case.") 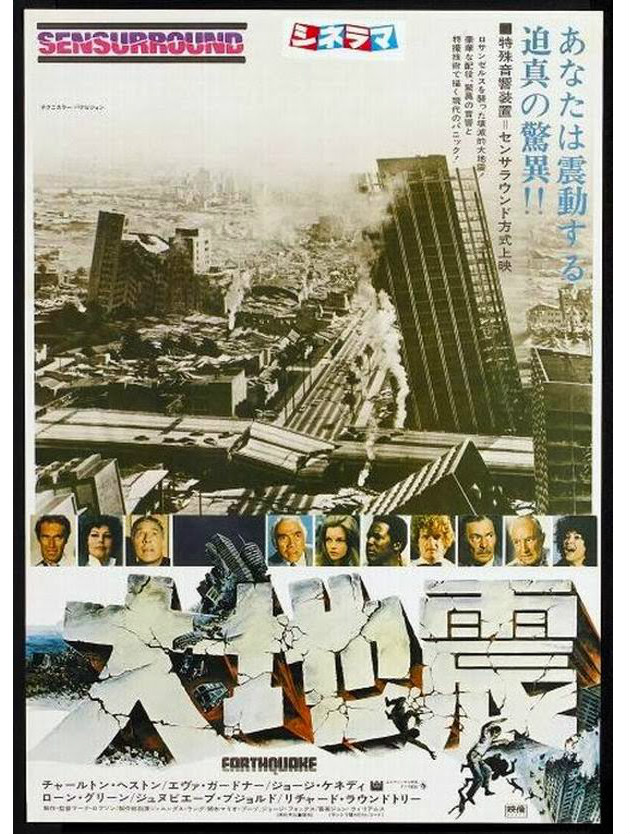 The paperback novelization, which I still own, includes an extensive "making of" section written by George Fox, who was brought on to rewrite a first draft script by Mario Puzo. Fox says that Universal Studios executive Jennings Lang came up with the idea for the movie while watching Airport: "It occurred to me that in just about every disaster movie you had a bunch of people getting on a boat or a plane. … But millions of people hardly ever get on boats or planes. What about a movie where the common disaster comes to them, instead of the other way around? Let's get that audience!"

Lang then hired Puzo to come up with the story, and when Puzo proved too busy with The Godfather, Part II to do more than write the first draft, Fox was hired. Veteran filmmaker Mark Robson directed. 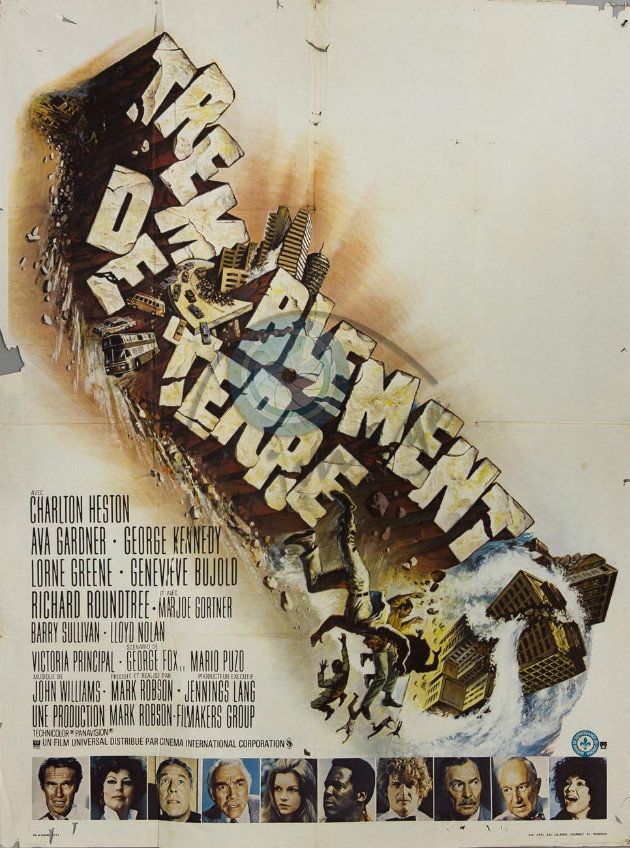 In his autobiography In the Arena, Charlton Heston admits frankly: "None of us, I think, imagined we were involved in very significant creative endeavors; we were all hugely compensated to fill out what were in essenence cameo roles, with about twenty minutes of screen time to work in." Heston also takes credit for the fate of his character, which he says went against what everyone else wanted.

Bizarrely, he seems to think that scene contributed to the financial success of the film: "Every time another check from the film crosses my desk … I think with some relish of what I hope wasn't the only time where I was right and they were wrong."

The movie's November 1974 theatrical release came on the heels of Airport 1975, also starring Heston, which opened in theaters the previous month, and just ahead of The Towering Inferno, which opened in December. All three movies performed strongly at the box office. Earthquake eventually grossed about $80 million; adjusted for inflation, that's about $349 million in 2015 dollars.

The 1970s disaster cycle had begun with Airport in 1970, and then gained momentum with The Poseidon Adventure in 1972, but 1974 proved to be the high point, as far as mainstream audiences and financial success was concerned.

Today we look back and remember all the awesome, fiercely independent visions that were realized in celluloid during the 1970s; films that hold up to repeated viewings as personal expressions of often troubled artistic souls. I'm happy to celebrate, remember, and further explore those dark sewers.

But I also remember seeing my homeland shake, rattle, and roll in Earthquake, to the point of utter destruction and heartrending despair, and then walking out of the theater to be reminded that it was all make-believe, that my city still stood, at least for another day. Perhaps that's why disaster movies often make for such compelling experiences: as nightmares of worst-case scenarios that we hope will never come true.

Do you feel this content is inappropriate or infringes upon your rights? Click here to report it, or see our DMCA policy.
1970s Cinema70s RewindCharlton Hestondisaster moviesdisaster pornEarthquake