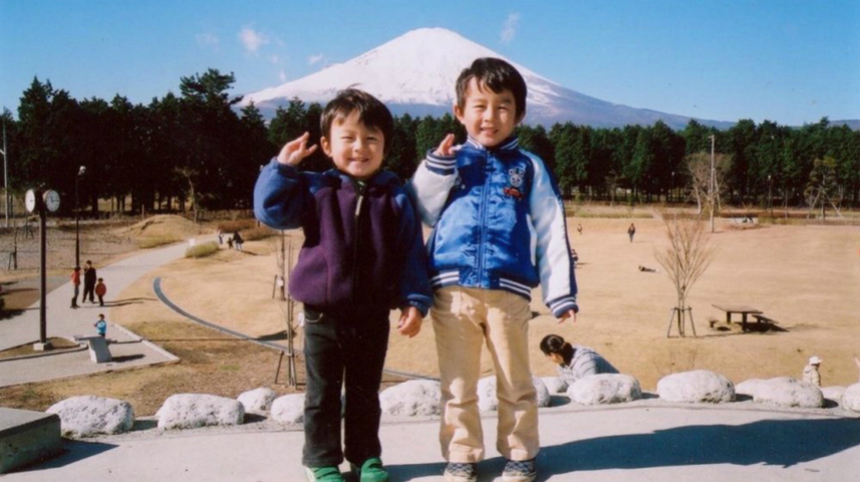 Mount Fuji is perhaps the most photographed volcanic mountain in the world. Its iconic, perfectly shaped appearance -- perfectly symmetrical 45 degree slopes on both sides, reaching to its slender necked caldera, often snow capped in winter -- is instantly recognizable and fittingly figures into the exquisitely coiffed Japanese culture landscape.

You can see the prevalence of its presence in Japanese art, from Hokusai block prints, literature, manga to films. Visual artist Fiona Tan makes a poignant film completely comprised only of still pictures involving Mt. Fuji.

Ascent is a correspondence of two lovers in voice-overs. This fictional narrative starts with a woman (the director herself) informing us that she received a large package from her Japanese lover, Hiroshi, who has passed on. It's full of pictures of Mt. Fuji, both old and new, and she has a task of deciphering what her dead lover was trying to convey in these pictures.

Hiroshi (Hasegawa Hiroki of Shin Godzilla and Why Don’t You Play in Hell? lends his voice here) narrates his part, as he climbs Mt. Fuji with hundreds other pilgrims, as many Japanese has been doing every season for centuries, relaying to her each step of the hike, accompanied by ordinary photos taken by hikers, often posing in front of the ever omnipresent mountain. With its elevation reaching 12,388 feet, even with hiking trails and rest stations, climbing Mt. Fuji is not an easy feat. He narrates a short poem:

Behold the sacred, magic mountain
The spiritual connection between heaven and earth
Symmetrical, solitary, snow-capped
And thus beyond reach of time

Through their narration, we find out the cultural and political significance of the mountain. As the Japanese folklore goes, Mt. Fuji is a home to Kono-Hana, the goddess of volcanoes. The presence of the mountain in popular culture was banned after the war, because westerners feared it would stir up the Japanese nationalism once again. Its perfect symmetry was broken when the volcano erupted in 1707, causing south slope of the mountain to collapse.

But it's a reminder that Mt. Fuji is an active volcano. The Tohoku earthquake in 2011 moved the Japanese main island of Honshu (where Tokyo and Mt. Fuji are situated) 2.4 meters eastward. Many seismologists predict a near future eruption is all but certain.

Tan explores several interesting ideas in Ascent. Using only still photographs in making the film, borrowing her dead lover's notion, she likens the photograph to ice, frozen in time, and film to fire, always moving and crackling. She co-relates grief and photographs as a means of stopping time. The active volcanic mountain, always present in Japanese psyche, is both permanent fixture and a symbol of impermanence and fragility of human life.

It's this duality that fascinates her. Mt. Fuji picture is often accompanied by cherry blossoms in the foreground. Kono-Hana is the goddess of both volcanoes and cherry blossoms. And the falling is the essence of the flower. Hiroki demystifies the sacred mountain from beyond the grave that although it might look perfect from the distance, up-close, Mt. Fuji is nothing but shapeless volcanic rocks.

Contemplation of memories figure into Ascent greatly. And you can easily see the traces of Chris Marker and Alain Resnais in Tan's approach, both technically and thematically, considering both filmmakers had always grappled with the idea of memories and time, especially in La Jetée, Sans Soleil and Hiroshima Mon Amour. Ascent is a daring, visually arresting film that is also deeply poignant and beautiful.

Ascent will have a one-week engagement, Wednesday, June 7 – 13, at Film Forum in New York City.

*Film forum is showing the film with free admission, courtesy of support from the Ostrovsky Family Fund.

Dustin Chang is a freelance writer. His musings and opinions on everything cinema can be found at www.dustinchang.com