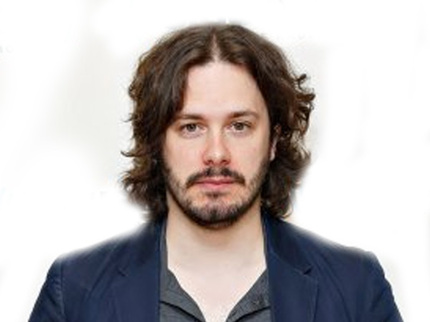 It’s always nice when a director complements you on your thematically on-point Simon & Garfunkel shirt, but Edgar Wright is nothing if not perceptive.

He’s one of those rarified directors who clearly has a vision, managing within studio pictures, indies and even TV series to inject so much of his own voice and passion. The creator of what amounts to modern genre classics, Wright really is in a league of his own, consistently turning out films that are both entertaining and highly literate, employing echoes of earlier works while always feeling fresh.

Like Scorsese and Tarantino, directors of the same iconoclastic ilk with a fiercely personal vision, Wright’s films have employed music in iconic ways. Take the use of Queen in Shaun of the Dead – the visuals of Pegg & co. murdering zombies to “Don’t Stop Me Know” is indelibly linked to that track, the visuals so beautifully merged that it’s as it if was always meant to be.

From “Born to be Wild” in Easy Rider on, the powerful synergy between rock and roll source music and cinema has exploded, so much that we practically take for granted when a Fargo or Mad Men knocks our socks off with a given tune. Leave it to Wright to remind that the perfect playlist is itself a form of exquisite direction, and how the merging of a pre-existing tune within the context of a film can be the stuff of magic.

Baby Driver is many things – an action film, a character piece, a bit of showy production, but above all it’s an exemplar of this magic act, the alchemy of bringing the perfect song with the perfect sequence. One can quibble about third act issues (Wright’s major Achilles issue in all his films), but you’d be heartless not to grin as guns blaze to the beat Button Down Brass’ cut of Tequilla, or whimper with pleasure as “Bellbottoms” blasts through the opening sequence.

We spoke exclusively to Wright while he was in Toronto to show a sneak of his film. Sure, we could have talked about the actors, and the production, and the rest of the stuff… But really, we just kind of spent ten minutes nerding about about the most indelible part of this film – the music.

So, it all started with a song…

I think I was 21 and I’d already made my first movie [A Fistful of Fingers], but I would absolutely not [have] called myself a film director. , even though I'd essentially made a movie. I was living in London trying to figure out what to do next and I was listening to “Bell Bottoms” by the [John Spencer] Blues Explosion a lot on audio cassette.

It wasn't necessarily that I thought oh, this is a movie that I can make. It was more literally that there's a visualization of a car chase, and this would be a great song in a film. I didn't know what that was at that point, or whether it was something that I'd even make. You probably couldn't make a car chase film in London – it’s not a city that is car chase friendly.

I was conjuring up these scenes, [where] there's Baby using music for motivation [which] then became the premise for the movie - It's about a young getaway driver who can't drive unless he has the right music playing. I kept filling in the details - Why does he have to listen to music the whole time? And then the tinnitus thing came in?

I had tinnitus when I was a kid. [Before] I read that Oliver Sacks book Musicophilia it never occurred to me to listen to music to kind of help. Whel I think back I only had the family record player, it wasn't like I had a stereo in my room or anything.

So the film is born out of a love of heist and car action movies and a life long love of music, with the two things colliding together in one project.

When did you clue in that if you named your lead character “Baby” you'd have a hell of a lot of Baby songs, and more importantly, you'd have a Simon and Garfunkel title track?

Well, I always liked that song.

My parents used to have a very small record collection. They had a record box that only had like twenty albums in it – six were Beatles albums, a Stones album, a couple of Genesis albums, one Peter Gabriel album, a Motown compilation, an Otis Redding album, some classical music including Holst’s Planets, which I'm sure every parent of the 70s had, and Simon and Garfunkel's Bridge Over Troubled Water. Most of those albums in that box I came to know very well, so I was always fond of that song and that idea for that name.

Once I got the idea for the character name, then it was the idea that everybody in the movie could have nom de plumes that were also terms of affection - calling characters Buddy, Darling, Doc - then you can riff on their names.

Loads of "Baby" songs, only a few for your female protagonist

With Debora I think there's only really three -  I mention two of them in the movie. There's a third Debora song as well.

I like the idea of then talking about people's names - Debora has a sister called Mary, she's got way more songs, Baby has the most songs.

There are no "Edgar" songs.

No, I don't think there is.

I think the only "Jason" song would be the FRIDAY THE 13TH theme, so I don't think that counts.

[A few moments go by while he searches relevant websites]

...Like with all your other films you're using music like you use action - cutting in reaction shots, cutting in small little pieces, following a highly specific choreography. Obviously, this is how car chases are done. Is it such a stretch from you beating the shit out of zombies to you driving cars around?

No. I mean, that's exactly the idea. I've done stuff on [the TV show] Spaced and in music videos... [Distracted by phone…]

Oh, you're right. There must be a Jason song. There isn't. That's shocking to me.

You get to cheat because you can go with “Wright” and homophonically get to all sorts of things – “All Wright Now”, “Absolutely Wright”, etc.

Yeah, that doesn't quite count. Yeah, I mean, if I went for Eddie, there's lots of Eddie songs, but you're right.

[Gives up searching] No Jason's that I can see. Sorry for your loss!

Getting back to my not so revelatory point, in someways the film feels a departure yet mostly the move to straight up car chase film feels completely comfortable with your style.

It's something that I've done in TV and in film and in music videos as well. I like doing scenes with choreography - some of the fight scenes in The World's End or a lot of the stuff in Scott Pilgrim - it's like building towards something.

I loved doing the Queen scene in Shaun of the Dead. I was thinking, I wonder how you could do an entire movie like this. So I'd already had the germ of the idea, but I think when I started writing it, it was very much like every scene is a different song, and that should be the rule in the movie.

What came first, the song or the scene?

I’d say a bit of both. In terms of the overall planning of the whole thing, before I started writing the draft and I was outlining it, it was the songs.

Did you create a playlist that told your story?

Eventually. I had the big sort of 8 songs that form the background of all of the set pieces and the finale and then as I started writing the rest of the movie. When I would get to a new scene where it was a scene where I didn't have the song, I wouldn't write the scene until I had the song. So then by the end of that process, yeah, there's like a playlist which is still on my itunes right now, with the film mapped out in the songs.

People like Scorsese change songs when they include a song in their films. It's sort of inevitable that now that the particular song from Goodfellas will track, Tarantino obviously does that as well.

Yeah, you'll never listen to Stealers Wheel[‘s “Stuck in the Middle With You”] without thinking of Reservoir Dogs.

And you may never again listen to "Hocus Pocus" by Focus in quite the same way after BABY DRIVER.

No. I think Quentin Tarantino has a thing where he says like whoever did it best will last. Quentin has done things where he has taken songs from other movies and made them more famous in his movies. People are probably more aware of the song from Cat People in Inglorious Basterds as they are its use in Cat People!

And yet for many with “Bohemian Rhapsody” you think of  WAYNE'S WORLD.

Well, I think you can have both. When I think of "is this the real life, is this just fantasy" I think of that video and their four faces singing in the Mick Rock lighting.

Now that you've done BABY DRIVER, are you prepared to commit to doing a full on musical?

So if they gave you HAMILTON, you'd direct it?

I'm sure I'm one of 100 directors who'd put their hand in the ring for that one.