10+ Years Later: Can THE MUMMY RETURNS Withstand The Test Of Time? 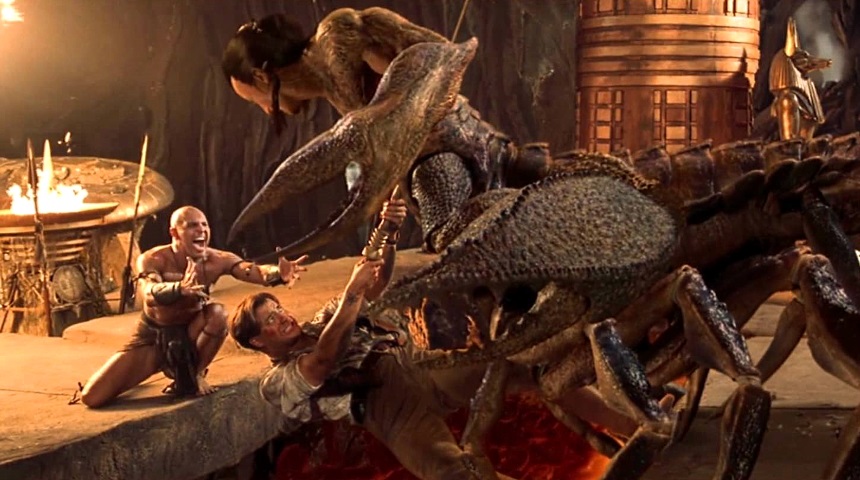 When I saw Stephen Sommers' fun creature feature Deep Rising, back in 1998, I immediately added him to the list of directors to keep an eye on. That was because I had an absolute blast with the film, warts and all, even though many of my friends thought it was garbage.

Two things in particular had tickled my fancy: I liked that it contained characters who had a fun chemistry with each other, and I loved that the film deployed a strange timing with regards to the jokes. Especially bad jokes depend on timing and delivery, and apparently Stephen Sommers and I just happened to share the same sense of rhythm.

So when early reports on Aint-It-Cool-News told that Sommers' next film The Mummy looked pretty promising, I was stoked. Alas, as it often goes with high expectations, when I saw the film I was disappointed with it. The spectacle was there, the chemistry between the characters was great, and so were the jokes... but the film was set up to be a horror film and it just wasn't scary. I mean, once you see the mummy jump alive, halfway in the film, well... that was it, right? After that it was just a villain to deal with. While I liked the film in places, I felt the mix was wrong.

Fast forward to 2001 and The Mummy Returns, which, to my utter surprise, TOTALLY blew me away at the time. Stephen Sommers apparently had taken the criticism about the first film being "Diet Indiana Jones" seriously, and made sure its sequel was exactly that: a fun action-adventure with lots of comedy. And to me, THIS time he got the mix just right. On top of that I dug the characterization better: Rick and Evelyn were a likeable couple, their kid Alex was not annoying (a miracle among child portrayals at the time!), and the side characters were all cool, ravishing, funny or heinous as needed. 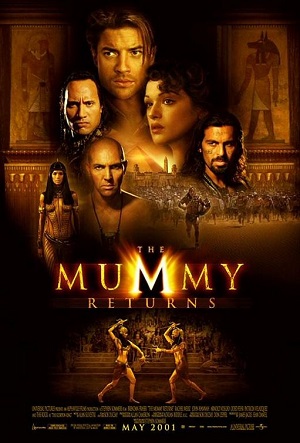 Sure, many of the effects and monsters looked fake, but to me that didn't matter. I mean, monsters look fake as well in Ray Harryhausen's films, yet we admire those for the sheer craft involved. The Mummy Returns probably has more in common with Ray's films than with any previous Mummy film anyway, because every twenty minutes or so you get a new monster thrown at you, ranging from (mostly real) giant spiders, to cannibal pygmy mummies, to ten foot high werewolf zombies.

First and foremost among the fake-looking monsters though is the Scorpion King, a character played in the opening prologue by Dwayne "The Rock" Johnson. In the film's finale he reappears as a grotesque chimera, half man, half three-scorpions, all CGI. Some of the designs for this creature's face were remarkable and would probably have looked fantastic when rendered as such, but instead, the producers opted for a computer-generated version of Dwayne Johnson's torso and face. This was unfortunate, because the technology was at the time still a few years removed from perfection, and the creature now looks as if he's wearing a rubber "The Rock" mask.

But I like the fact that they went for broke on the effects, doing them whether they could actually pull them off or not. Realistic-looking large-scale computer generated fantasy armies wouldn't appear until half a year later, in Peter Jackson's first Lord of the Rings film, but in The Mummy Returns these are obviously still a work-in-progress, and despite being very expensive at the time, they now look cheap.


While I have a fond place in my heart for this movie, I did wonder if it would still entertain me in the current time, as its shock-and-awe kitchen sink approach with the effects just doesn't look so good nowadays. But a few weeks ago, on a rainy weekend day in May, my 12-year-old son asked me if I knew a fun film. While I wagered he'd find The Mummy a bit too scary still, I thought The Mummy Returns would be perfect. So we watched it and... despite the fake effects, he loved it. The jokes worked, the action scenes thrilled (particularly the London chase is fantastic), and he was totally "in" the film.

And me? I was right there with him. So far, it's one of my favorite re-watches this year. Now I hope he gets a bit less scared of horror, so I can show him Deep Rising soon...

Do you feel this content is inappropriate or infringes upon your rights? Click here to report it, or see our DMCA policy.
Brendan FraserRachel WeiszStephen SommersThe MummyThe Mummy Returns