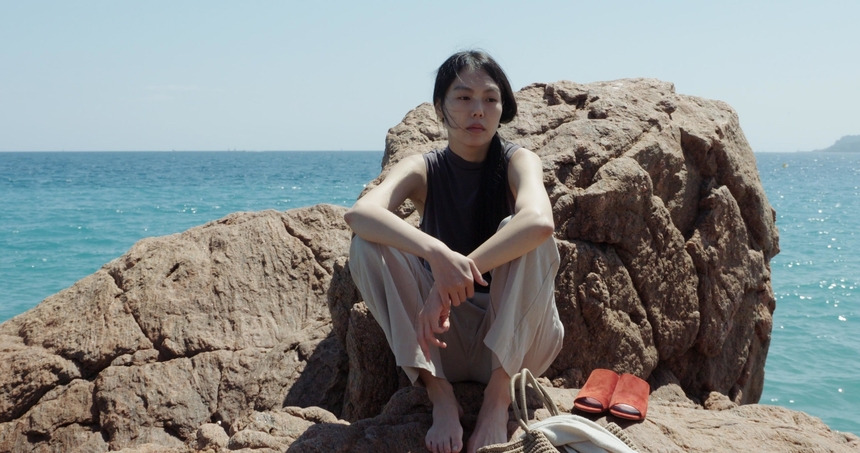 Love him or hate him, Hong Sangsoo has been remarkably consistent with his films, which both offer viewers a familiar framework and new variations on his favorite themes. His 20th work Claire's Camera debuts this weekend as a Special Screening in the Cannes Film Festival, after shooting at the festival last year. The brief (68 minutes) film reunites him with his In Another Country (2012) star Isabelle Huppert and muse Kim Min-hee for the third time (with a fourth collaboration, The Day After, also premiering at Cannes in a few days in competition).

Kim Min-hee plays an employee of a Korean film sales agent who is suddenly fired by her boss for unclear reasons during the market at the Cannes Film Festival. Meanwhile Huppert plays a Parisian artist who walks around town taking pictures and meets the fired worker as well as a Korean director, whose film is represented by the same company.

Just as she did a few months ago in Hong's On the Beach at Night Alone, which earned her the Silver Bear for Best Actress at the Berlin International Film Festival, Kim plays a woman whose life is turned upside down due to her liaison with a married filmmaker, once again blurring the lines between fiction and reality. Those lines cross several times in this story, which begins with a shot inside the booth of a film company that sports the poster for Hong's Yourself and Yours on a door.

Awkward exchanges over meals and drink dominate as always but even by Hong's minimal standards, Claire's Camera feels like a film that was made on a whim with little preparation. Shot a few streets away from the main action of the Cannes festival, Hong's film takes place in cafes, restaurants and beaches, and sees a few hard-to-fathom characters engage in unlikely interactions. The ruminations exchanged during drinking sessions don't have the bitter poignancy seen in other Hong films, and with its conventional chronology and bare-bones aesthetic (much of it was surely shot on the fly), it doesn't offer a puzzle for the viewer to decrypt, a facet that drives some of his other films.

Huppert brings a breezy charm to her Claire character and lights up the screen when she's on it, but as a witness to the action who drifts in and out of the story and without a personal background, she doesn't also fit comfortably into the narrative.

Meanwhile, Kim Min-hee follows her Silver Bear turn with a slighter role here that is actually the central focus of Claire's Camera. Thrown into a particularly unfair situation and stripped of her job and support in a foreign country, she pushes back in small ways, such as by delaying her departure or turning up at a party in jean shorts, both of which stoke the anger of those she had traveled with to the event in the first place. Kim manages to capture the chaos and confusion erupting under her placid exterior.

In the midst of a strong run of films, Claire's Camera feels like a perfunctory blip in Hong's catalogue which brings together a formidable troupe of actors and tosses them onto the Croisette, hoping for something to stick, which never quite happens.

Do you feel this content is inappropriate or infringes upon your rights? Click here to report it, or see our DMCA policy.
cannescroisettehong sangsooIsabelle HuppertKim Min-heeSouth Korea