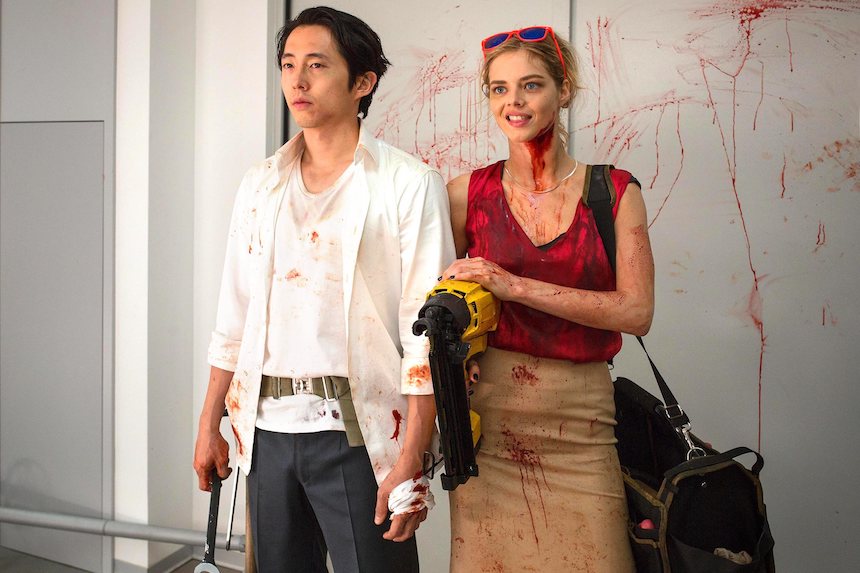 As a journalist, programmer, and filmmaker, I've been to my fair share of film festivals. I've just arrived home from Chattanooga Film Festival 2017, and.... WOW. Only in its fourth year, this incredible festival has managed to blow most of them out of the water. Admittedly, they've had guidance from the deranged minds at Fantastic Fest, but the execution comes from the weirdos in Chattanooga.
This festival blisters with a passion for films from its festival director Chris Dorth, Jr., CFF assistant director OG Chris Dortch, Sr, and all of the other staff and volunteers, who are too numerous to name. Chattanooga forges new friendships and strengthens existing ones. Tentative deals were struck, that festival unicorn, sometimes caught when you gather a ton of creative minds together in one place.
The festival also puts on hilarious events like the Scripts Gone Wild drunken reading, the requisite karaoke and parties, a concert on a nearby riverboat, another annual presentation from the encyclopedic font of film knowledge that is Joe Bob Briggs (this time on Tennessee films), and even a pub crawl celebrating one notorious filmmaker's retirement.
I didn't even get into the special brand of madness that is Everything is Terrible! live. The show was packed with acolytes and newcomers to the church of the weird and awkward. If you've never seen this show and it's in your area, do it. It's hard to describe the multi-media performance, but it's something that you won't soon forget. And the Acro-Cats cat circus made an appearance with a few felines for some tricks ahead of the jaw-droppingly adorable sensation that is Kedi. Everyone lost their minds; both when the live cats did tricks for treats, as well as through the astonishingly well-edited doc on street cats in Istanbul.
There were workshops for guests, too, like the Snowfort Speaks talk, wherein producers Travis Stevens and David Lawson discussed the ups and downs of making films; the Daniel Noah (of Company X and SpectreVision) pitch sessions, at which filmmakers like myself went onstage, pitched projects, and received feedback; a Cat Planet acting and movement workshop; and the Justin Benson and Aaron Moorehead-led presentation on script-to-screen. That is, the duo told the audience what was originally written in a script, showed an assembly cut, and then presented a final cut of the scene in question with coloring, more edits, and added visual effects. It was a kickass learning experience.
And of course, there are the films, which is why we were primarily there in the first place. The 35mm screenings were a serious treat; the Charles Bronson and James Colburn vehicle Hard Times --- directed by Walter Hill --- looked pristine. Fantastic Fest's Zack Carlson introduced the film, and if I recall correctly, we were the first audience to see the restoration. Carlson showed off his awesome Bronson tattoo, as well! The secret screening was the excellent 1980s Rutger Hauer scarefest The Hitcher. Other 35mm screenings included the strange, found-in-a-car-trunk Jungle Trap, and the AGFA-presented The Zodiac Killer and The Dragon Lives Again, starring Bruce Lee in Hell.
All this genre-loving goodness is nothing to speak of the contemporary films! Short blocks and feature screenings alike brought in scores of filmmakers who were floored by the festival. Evan Katz appeared in person with his new, Netflix-bought crimefest Small Crimes, starring Nikolaj Coster-Waldau (Game of Thrones) adopted from the novel by Dave Zelserman. Graham Skipper attended for the world premiere of his first film Sequence Break.
Also playing were: The Lure; Mayhem; S is for Stanley;  Lake Bodom; The Devil's Candy; Bitch; and Buster's Mal Heart. Cast members Andre Gower and Ryan Lambert of Fred Dekker's beloved The Monster Squad came for both the film's q&a, plus a live recording of their Squad Cast. There is just too much awesomeness to be contained in a post like this, so head on over the fest's website to see what you missed --- and get a glimpse of what future editions might look like.
Again, this festival was truly something special. Headed by some of the most sincere, film-loving peeps I've met in the fest world --- and with the breadth of live events, presentations, 35mm screenings, parties, workshops, and more --- I'm a total fan of the Chattanooga Film Festival. I cannot wait to attend every single festival hereafter, if I'm able. It's a sentiment of everyone I spoke to over the weekend.
Congrats to the winners of the Chattanooga Film Festival 2017 Awards:
Audience Award — Mayhem (Joe Lynch)
Best Feature — Sequence Break (Graham Skipper)
Best Short — Hell Follows (Brian Harrison)
Tennessee Filmmaker Award — Dream Keeper (Whitney Stevenson)
Student Filmmaker Award — Potential Collab (Nate Burke)
Dangerous Visions Award — End of Decay (Chris Todd and Mike Wilchester)
3
Sign-In to Vote
Tweet 0 Submit

Do you feel this content is inappropriate or infringes upon your rights? Click here to report it, or see our DMCA policy.
Chattanooga Film Festival 2017MayhemSequence BreakSmall Crimes

I seriously can't wait to see Mayhem,I really hope all this hype/great reviews of it translate into a wide release.

Yeah, I'm glad it's building buzz. Joe Lynch is good people and he deserves to make a big hit.

" Yeah, I'm glad it's building buzz. Joe Lynch is good people and he deserves to make a big hit"