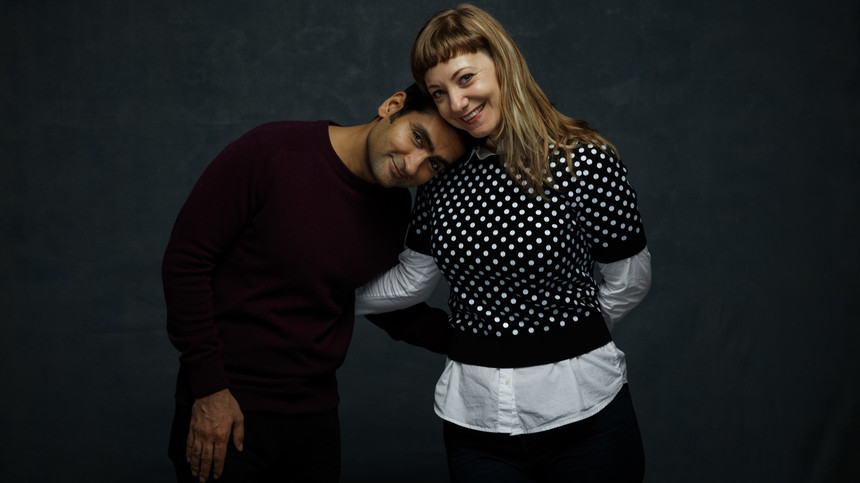 Every couple has their meeting anecdote to tell at dinner parties and hopefully to their grandchildren years down the line, but few, if any, will top screenwriters, Kumail Nanjiani and Emily V. Gordon's. It is often asked of married people, ‘When did you know so-and-so was the one?’ For Kumail, the moment he realized that Emily was the girl he wanted to marry occurred while watching her lie comatose in a hospital bed.

That was just over ten years ago, and now the story has been immortalized in Michael Showalter's new film, The Big Sick, co-written by the grateful-to-still-be-together - and alive, in Emily's case - couple, and starring Kumail Nanjiani as himself, with Zoe Kazan taking on the role of Emily.

Given the severity of the fargone situation, The Big Sick may not sound particularly funny, but in addition to delivering genuine feels, as well as romance worthy of Harry Met Sally-caliber romcoms, the film is delightful. It's a balance few writers and directors are able to achieve, but The Big Sick offers all this and more, genuinely interwoven along with a profound dose of honest family drama, all adding up to one of the year's most worthy films.

I had the pleasure of meeting Kumail and Emily at SXSW, where the film just won the Festival Favorite award, to hear firsthand how their tumultuous early days together translated into the excellent film you can look forward to seeing upon its release this June.


So, I'm sure you guys have been rehashing your past all day, and beyond.

Right. So, when did the idea to adapt this life event first come to you?

Kumail: I think I wanted to do it, before Emily wanted to do it. I was like, I think this is a new and interesting story: I think it'll be relatable to people, I think it'll help me deal with some of this stuff. And I knew that I wanted to feel confident enough as a writer, and as a performer to be able to do a good version of this story. So, a lot of it was waiting like, "I don't think I can do it. I don't think I can pull it off just yet." -- the acting or writing -- and then, it was about five years ago that we both decided, "Hey, I think it's time we should start to work on this." So, I would say it took us five years.

Emily: Yeah, it happened 10 years ago, as of this week, in fact. I'm in my coma time right now, actually. I'm having my comaversary.

Emily: That's a good one. Yeah.

That must feel strange.

Emily: It is. I have a few days, that are just kind of special days for me.

So, how did you feel when Kumail pitched the idea of making this a script? Were you immediately on board? Trepidations?

Emily: I have written a couple of essays about being sick. As we were starting to do this, I'd just written one for Lenny, I think. And so, I was on board for it, but I wanted it (turning to Kumail) I may be a little more private than you are about having stuff be fictionalized, and what I didn't want is for it to be a broad comedy. Where it's like hilarious, and people are like accidentally unplugging me. That's always a joke with coma people in movies, they think, "Oh, I unplugged her." I didn't want that, so I was like, "If we can tell a story that's like true, and honest and grounded, but also really funny ..."

Kumail: That works as a piece of entertainment.

I read in the press notes that Kumail was doing the first couple of drafts, and then, Emily came on board later in the process. How would you say, Emily's contribution strengthened the work?

Kumail: Well, Barry always says, you know, we've been reading these drafts, and they were pretty good, and suddenly we read one, and that was way better, and we saw that there was another author attached. I was like, "Thanks Barry." I think it helped in a hundred ways...

Emily: I don't think either of us could have done it alone..

Kumail: Individually, neither of us could have done it. So, the fact that I was trying to do it on my own was stupid.

Emily: I wanted to be asked.

Kumail: Well, you got asked then.

How long did it take to be asked? Too long?

Emily: It was a couple months, it was not that long.

Kumail: It was a few months, yeah. I don't know. I'd done like a 165 page version that was just a vomit draft.

Kumail: And then, you came on. And basically, you know, I was getting notes from her, but the notes... I was like, "Oh, this is a completely different perspective of these events that enriches it."

Emily: Yeah, how did I make it better, though? Like specifically.

Kumail: Because a lot of my writing was obviously from my perspective, and then from your perspective... See the negotiation of any relationship, that is a big part of the script, all happened because of Emily, and also, when Emily wakes up, for us it's all happy, and I remember just being happy. My memories of that are only happy. Her memories of that are miserable.

Emily: Miserable. I was shocked.

Kumail: So, that's a very interesting way in which the movie has both perspectives, it's right when she's awake, she's spitting out the water, saying it tastes like semen or whatever. And everybody else is all smiles. And I think that juxtaposition is really cool and interesting. And I think all of that comes from collaborating.

Emily: Yeah, a lot of the hospital people had invented a personality for me that did not match how I felt when I woke up. Because I had, like, fun hair, and I just was mean, and scary, and very upset, and angry and would cry a lot, for like a while. And people were like, "Oh, we thought you were gonna be fun." And I was like, "I used to be."

God, you must have been spooked.

Emily: People were like, bebopping into my room that I didn't know, and I was like, "Get out. I don't know who you are."

Kumail: And, even when she got out, she has to deal with the fact that you were betrayed by your own body. And dealing with all of that.

Kumail: ...It’s s a whole thing. And you, sort of, have to deal with that on your own, and there isn't time. So, we wanted to put that perspective in the movie, where's she's not ready to be together again. Because, she's going through some stuff that she's going through on her own.

Kumail: Yeah, me neither.

Speaking of perspectives, you obviously can't imagine what Kumail was going through, because you were unconscious, so what was it like becoming acquainted, and living the experience, via the writing.

Emily: I think it was very interesting, because it wasn't something I was- self focused is not the word, but I was only kind of really concerned about my own health at the time. So, I didn't think about the fact that my parents, and my best friend, and my sister, and my boyfriend all had to go through a very long period of time where they weren't sure what was gonna happen to me.

And the day-in and day-out of that, it had not occurred to me how difficult that must have been, not before writing the movie, but the writing of the movie, really kind of helped sharpen that for me as well. And it helped me have a lot of conversations with my parents that were interesting, and that I had not had before.

Kumail, the first time I saw you, I would say was eight years ago at Bonnaroo -MICHAEL AND MICHAEL HAVE ISSUES.

Emily: You saw that meltdown show?

No, it wasn't a meltdown, it was a MICHAEL AND MICHAEL HAVE ISSUES live.

Emily: Was that the one where you had your-

I remember a joke from your set actually, but, I don't have time for that. That said, I'd like to hear about Michael Showalter coming onto the project.

Kumail: Well, so you know that show. I wrote for that show, that was kind of like my first real job - writing it - and then, we'd stayed in touch and that was the first time I acted and Mike was like, "You have to act in the show." And, he forced me to to do it. I had to audition four times.

Kumail: It's true. Because of Comedy Central, not because of Mike. And so, we stayed in touch, and we were friends obviously.

Emily: We went to his wedding.

Kumail: We went to his wedding, so we had stayed in touch, and then, he - I hadn't talked to him in a little bit, and he sent me the script called, Hello, My Name Is Doris. And he was like, "I want you to play this part in it." And I loved the script, I thought it was so beautiful and moving and funny and weird, and of course, I said, "Yes." And so, we sort of reconnected then, and then, I saw the movie, and loved the movie.

Emily: It was so good.

Kumail: And we had sort of talked about it with our manager, after Emily saw Hello, My Name Is Doris - we saw it on our laptop before it came out. We were like, "I think this might be the guy to do it."
And then, someone got the script to Mike, and Mike called me, and was like, "I wanna do this movie." So, we were all on board. But, we sort of had to get Judd and everyone on board.

Emily: And also, we met with other directors too, just to kind of see what was out there-

Kumail: Yeah, we met with a bunch of directors, and Mike came in, and he had like a total plan, and he got the movie, exactly from the beginning.

Kumail: And Judd was like, "Alright, you guys are making this movie together."

Do you feel this content is inappropriate or infringes upon your rights? Click here to report it, or see our DMCA policy.
Emily V. GordonJudd ApatowKumail NanjianiMichael and Michael Have IssuesMichael ShowalterSXSW 2017The Big Sick

More about The Big Sick