Michael Showlater directs Kumail Nanjiani and Zoe Kazan from a script by Emily V. Gordon and Nanjiani based off their real-life relationship 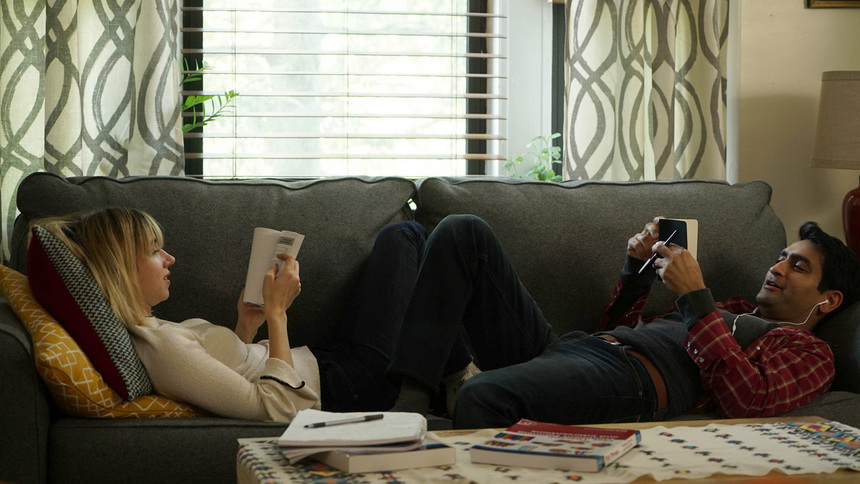 Whenever The Simpsons offered moments of unexpectedly touching sweetness, the writers would refer to these moments as "Jimmys", as in, show runner James L. Brooks, who enjoyed providing the family with bouts of humanity. Walking the line of comedy and drama is something Brooks excelled at throughout his entire career, both in television and film, and you might say the greatest descendants of this craft are filmmakers like Judd Apatow, and lately, Michael Showalter.

Thus, it is lovely to see these two great minds teaming up to collaborate on Kumail Nanjiani and wife, Emily V. Gordon’s autobiographical, The Big Sick, which tells the uniquely true story of their own troubled courtship. The Apatow produced, Showalter directed film stars Kumail as an outsider comedian struggling to rise through the ranks of career-comedy in an often xenophobic landscape. Coming from a Muslim upbringing, although his family once brought him to America as a child to assimilate him in its culture, they're nevertheless hellbent on their son participating in the most significant of his culture’s traditions: arranged marriage.

The problem is that Kumail, trapped between two worlds, is culturally conflicted. His identity is as much American as his heritage which is supposedly what his family wanted for him and yet they cannot accept the threat of a white woman stealing his heart. As in reality, her name is Emily (Zoe Kazan) and after a preliminary dating period, she proves to be perfect for Kumail; that is, in a world where he is free to follow his heart without repercussions. Unsurprisingly, given the necessary secrecy of their relationship, their love is a ticking time bomb. More surprising is that after the plug is painfully pulled, a mysterious illness pulls Emily into an nefarious coma. With that bombshell, Kumail is left to decipher his feelings, while also being there for Emily’s heartbroken parents, who are less than impressed with stories they’ve heard of the recent breakup.

The parents are heart wrenchingly played by the powerful Holly Hunter and hysterical Ray Romano, who is incredibly sweet and real as a husband treading water in a rocky marriage amidst the threat of unfathomable tragedy. What begins as romcom, reveals itself to be a far richer story about Kumail’s sketchy relationship with his love interest’s parents, among other fascinating subjects. But it is this burgeoning connection that is at the heart of the film and it delivers in wonderfully surprising ways. Naturally, some details of the real life events have been changed for narrative purposes, but for the most part, Kumail and Emily’s family really did awkwardly bond over their daughter’s brush with death and it makes for a helluva story.

Consequently, The Big Sick skillfully tackles real themes like immigration, assimilation, heritage and relationship commitment, as well as the costs of pursuing pipe dreams in the face of your family's disappointment, all the while being every bit as funny as we’ve known Nanjiani and Showalter to be. What’s so surprising about the film is not how funny it is, though it is certainly that, but how touching and from the heart the material is. The Big Sick is a milestone film for Showalter and a work that will push Nanjiani into a more serious, well-deserved light.