Now on Blu-ray: Kirsten Johnson's CAMERAPERSON Is One Of Criterion's Strongest Discs 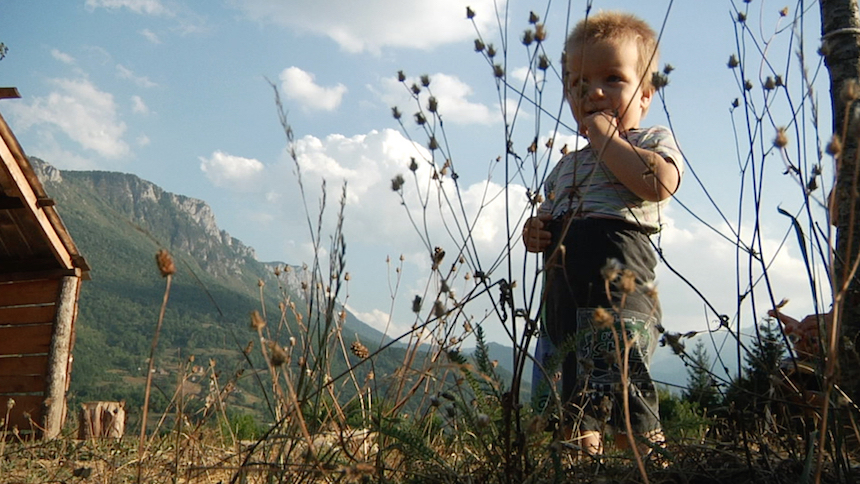 2016 was a disproportionately good year for documentary. Films like I Am Not Your Negro, 13th and O.J.: Made In America lead the conversation on race in America. Docs like Weiner and Tower arrived in an eerily timely fashion to collide with real-world political conversation in thoughtful, productive ways. Some, like Negro and Tower, pushed the form itself while they were at it - but none accomplished as much in this arena as Kirsten Johnson's Cameraperson.

A film comprised entirely of outtakes - short snippets of unused footage from other, longer documentaries - Cameraperson could be maddening if it didn't quickly, and decisively, become sublime.

Of course, the calibre of the outtakes matters. (One can imagine other filmmakers watching this and tearing up their camera reports with a frustrated cry of "her rushes are better than my whole movie!") As a cinematographer on documentaries like The Oath, Darfur Now and Citizenfour, she's been in places, and had access to people, whose cutting room clippings would compete with the best fiction that the movies have to offer. In Cameraperson, she lays some of that material bare - but only enough to create a rich, deeply moving tapestry of lived human experience.

(Here's a handy resource of all the films whose footage are excerpted in Cameraperson - I'll be adding them all to my watchlist.)

It is a challenging film in a number of ways. The lack of structure, and the extreme brevity of Johnson's vignettes (some are less than 30 seconds, and only a few are more than a couple of minutes), can make the first portion of the film seem like a multi-use mini-DV tape you've found in your closet, containing scraps from four different days' shooting, the provenance of which you don't remember.

Structure and connections begin to patiently reveal themselves, however, and the film quickly becomes spellbinding. This is where another challenge begins: some of this material will haunt you for months. (Or maybe forever.)

A young mother, only her knotted hands visible, talking with the director about her feelings of guilt about seeking an abortion, because she is concerned that a second, unintended pregnancy will destroy her ability to care properly for the child she already has, and can barely support. A woman reckoning with the suicide of her mother and completely losing her shit on camera, in the middle of which a great reef of snow collapses off the roof outside, blocking the nearby window. A troublesome birth in a midwife clinic in Nigeria, where every breath drawn by a sickly newborn is a terrifying kind of victory, and all the more so for the uncertain pause that follows.

Johnson also records some time with her mother, who was years into an Alzheimer's diagnosis, along with some material following her mother's death, as she tries to make sense of the vapours of memory - some as strong as an onscreen thunderstorm, others as elusive as an impression of a smile - that she has captured on film. Here, the inherent moral quagmire of documentary, and perhaps of art itself, rears its head: what do we have the right to show, or not show, in our lives and the lives of those around us? What sacrifices are required to arrive at meaning?

Cameraperson is an astounding work. It's soulfully human, as bound up in the triviality of daily life (burying a dead bird) as the banality of our seemingly inherent evil. A great deal of the film is spent with Johnson on two trips to Foča for the film I Came To Testify, a town in Bosnia which bore a great brunt of that region's holocaust. We absorb those evils, and also measure the ways in which some of the women, Johnson included, negate or defer those evils.

Perhaps unsurprisingly for a film about documentary itself, the Criterion release of Cameraperson (spine #853) is feature-rich. "Editing Cameraperson: 25 Years In The Making" is a 36-minute exploration of how Johnson and her collaborators brought the pieces of the film together, trusting that the audience would supply the linkages that would draw meaning out of a work which is, by its very nature, non-linear.

Before even arriving at that point, however, the featurette sees Johnson explaining in detail how she arrived at the decision to make Cameraperson in the first place. We also see some excerpts from earlier versions of the film, much more traditional in form (including voiceover by Johnson), and how the team determined that they should move away from that and into the "memoir" format Cameraperson now takes.

"In The Service of the Film" is a roundtable between Johnson, documentary filmmaker Gini Reticker, and sound recordists Wellington Bowler and Judy Karp. Running almost 40 minutes long, the piece is warm and chatty (and like many Criterion features, will make you want to make a film) and goes into more specific details of the shooting days that make up the excerpts from Cameraperson. We also get talks from two film festivals, one of which is hosted by Michael Moore, in which Johnson goes into her creative process in even more detail.

The featurettes tie together much better than a traditional commentary track ever could, because they let us hear from Johnson about the making of the film through a variety of lenses (no pun intended) and at varying scopes of detail.

Here and elsewhere, Johnson speaks at length about how she intended the film, in part, to lay bare the contradictions and betrayals at the heart of documentary filmmaking, and image capture itself. These betrayals are not lost on me - the sequences, particularly, with her mother can be hard to watch from a personal privacy standpoint - but I am inspired by the courage to lay them bare regardless, because the result is nothing less than a human record. I hope when the aliens from the end of A.I.: Artificial Intelligence show up to survey the desolate remains of this frozen world in order to figure out what the hell we did to ourselves, that there are a few movies like this lying around, to tell them that we were slightly more than the sum of our stupidity - if only just.