Review: CAMERAPERSON, A Moving Self-Portrait Of A Veteran Cinematographer 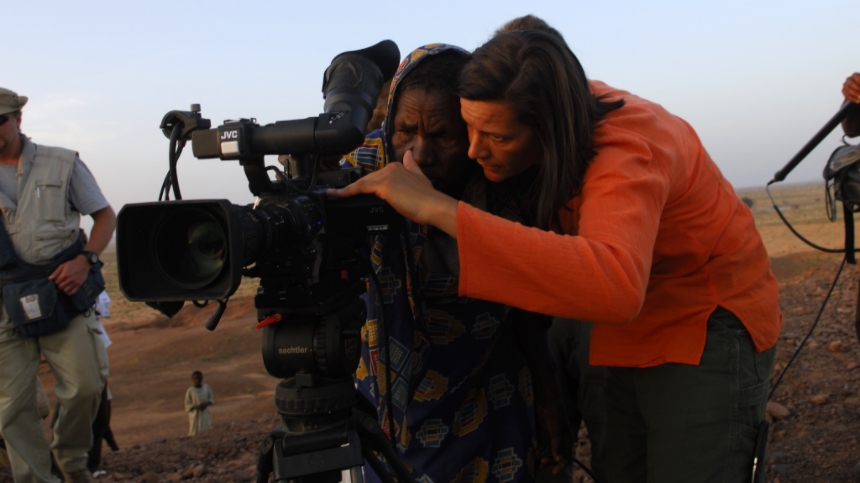 Kirsten Johnson's career as a cinematographer is a long and accomplished one in the documentary field.

She is responsible for images of countless documentaries by filmmakers such as Laura Poitras, Michael Moore, Kirby Dick and many more. Her work took her to many of the world's trouble spots:  Bosnia, Iraq, Afghanistan, Liberia, Nigeria, Rwanda.

With Cameraperson, she assembles the b-rolls from various films she worked on as an all visual self-portrait. What's amazing about the film is that she was able to see the beauty in the most horrendous conditions around the world and capture those moments on camera for everyone to see. The result is not only a portrayal of a committed professional but an intimate, moving memoir unlike any other documentaries I've seen.

It starts out in Foca, Kosovo, the focal point for mass extermination and mass rape of Muslim population by the Serb-military forces during the Balkan War in the 90s. Rolling hills, pretty wild flowers and traffic jamming sheep and sheep herders make an ideal picture of country life, covering up the violent, ugly past.

Johnson was there shooting I Came to Testify, a PBS documentary about the first International Tribunal of its kind to hand down a verdict that sexual violence against women during the war is a war crime. The footage finds Johnson focusing on a Muslim family who had been living there for generations and came back after the war. We see her being invited to the house and sharing their meals. It's all smiles and laughter. A real human contact.

Jumping back and forth from place to place and in time, Cameraperson plays out like someone's non-linear memories on screen, highlighting the brightest, most vivid moments. With the wealth of footage, we are introduced to the glimpses of beauty: the idyllic pastoral countryside in Kosovo, a baby being delivered in seriously underequipped, crowded maternity ward in Nigeria, a makeshift roadside picnic in Afghanistan, the beautiful girls walking by in the streets of Liberia...all under the shadows of violent past/present and imminent danger.

It's not difficult to guess where Johnson stands politically with all those topically charged documentaries she worked on. But as a visual artist, she doesn't have to be the loud, rhetorical voice, like the directors in those pointy films. Without relying on narrations, she quietly observes everything through the viewfinder of the camera and she manages to personally engage with her subjects.

Perhaps the most touching segments are home video footage of Johnson's family. We see her family, her twins (a boy and a girl) and her father. It also shows her mother's deterioration due to Alzheimer's.

Memories shape who we are as individuals. With that context in mind, Cameraperson becomes one individual's noble attempt to capture those unforgettable moments in her life and forever memorialize them. And I find her attempt here extremely moving.

Johnson goes back to Foca after five years, to the same area and visit the same family. She tells the townspeople why she came to the place the first time: to document unspeakable evil that took place. But long after that production wrapped, it was the beauty, warmth and kindness of that family that made an indelible mark in her life, so she had to come back. She shares the footage she shot five years ago with the family.

Things we see and feel, encounters and connections with others shape who we are. One could write a book, one could sing a song about it. This film is a deeply personal documentation of how Kirsten Johnson's experience as a filmmaker shaped her the person she is. And because she is a seasoned cinematographer, we all benefit from seeing how it unfolds on the screen. Deeply moving and contemplative, Cameraperson is a hands down one of the best documentaries I've seen this year.