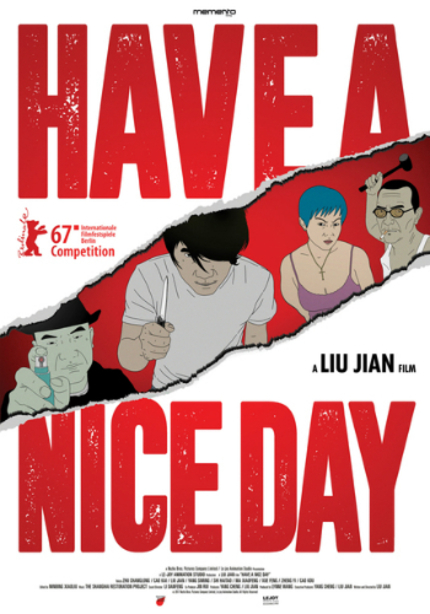 The simple fact that Chinese animator Liu Jian's thriller Have A Nice Day even exists at all is somthing of a marvel. Independent animation is a tough arena to succeed in in any nation, independent animation intended for adults exponentially more so. Throw in the fact that Have A Nice Day was created in a nation not known for its local animation production on any scale while being very much known for taking an active role in how said nation is portrayed on screen and, well, you can probably see where this is going ...

Driver Xiao Zhang robs 1 million dollars from his boss in order to fix his girlfriend's failed plastic surgery, but he is soon faced with a bigger predicament when a hitman, a gangster and a robber go after him and the money.

There was a moment where it appeared that Liu's film may have somehow escaped the gaze of Chinese censors with the film having its world premiere in Berlin, but that was proven not to be the case with the film's subsequent selection in Annecy - the world's largest and most influential animation festival. When Chinese government pressure on the festival itself to withdraw the selection was rebuffed, censors instead opted to deny the film an export visa and put sufficient pressure on the filmmakers that they, in turn, asked the festival to cancel screenings, fearing unspecified reprisals at home. The film's crime? Presenting an unvarnished and unsanitized portrait of crime in China.

It does appear, however, that - Annecy aside - the film will still be making its way to audiences around the world in distribution - and will soon be appearing as part of the Fantasia Festival in Montreal - and we are very pleased to premiere the first international trailer for it here at Screen Anarchy. This is looking pretty fantastic and we very much recommend checking it out below.