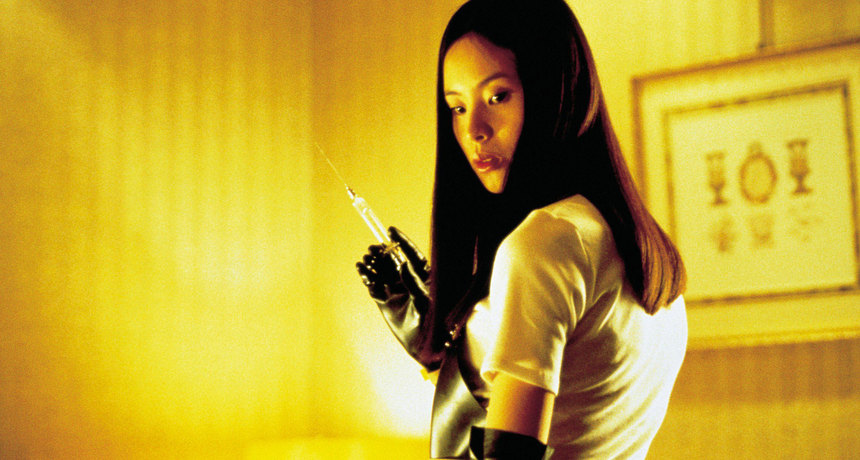 Audition (Takashi Miike, 1999) is a film whose memory has been all but condensed into a single image: a young Asian woman, soft-featured but wearing an unmistakably sinister side-long glance, holding up a syringe. This image was used for the film's promotional materials—posters, DVDs—and accompanied nearly every review and article written about the movie. Like the eyeball being prepped for slicing has for Un Chien Andalou, the image's ubiquity and the implications of the infamous scene have overshadowed the film itself. I gave real thought to using a different still for this article, but ultimately nothing else felt right. And would anyone even recognize it from another shot? For this edition of 10+ Years Later, I wanted to see if I could separate the film from that image, and the reputation of its final scene.

I came to Audition sometime around 2004 or 2005. It was the heyday of a genre newly dubbed 'Asian Extreme,' though the type of films that fit under its label has been around since the late 70's. Really, the early 2000's was merely when the genre began to be noticed in the western world. Asian Extreme films were, to put it simply, films that displayed excessive violence, horror, or were just aggressively bizarre. A large number of these movies were presented to us by Tartan's DVD label (which also helped coin the name itself) “Tartan Asia Extreme.”

Of the dozens of films that emerged around this time, Audition was one of the more artful offerings. Watching it again, Miike's film has more in common with Mulholland Drive (which it predated by two years), than the grindhouse-inspired fare with which it was often grouped. Audition was notorious for having shocked its unassuming audience with nauseating violence, and that shock was earned by its slow, deliberate build-up. As Miike intended, I fell under the film's spell: lulled into that false sense of security and giddily surprised the second it began to spoil as the mold crept in. I watched, re-watched it, and told everyone I knew they had to see it.

Audition's most disturbing moments are the revelations (if we can trust them to be such) concerning Asami's past, and her present private life. This sequence begins when Aoyama falls to the floor, drugged by Asami, and thus is seemingly his own fever dream. Indeed, he relives his dinner date with Asami, but the conversations are different, and his dead wife is in attendance, along with his son's new girlfriend. Obviously, this indicates that we cannot trust that these are his memories. Some of the things he experiences are moments that he couldn't have possibly been privy to, that seem to be coming from Asami's own subconscious.

Through Aoyama's flashbacks/hallucinations, we continue to see flickers of Asami's abuse-plagued childhood, featuring cameos from her demented piano-playing uncle whom Aoyama encountered while seeking her out. We also see Asami in her apartment—or rather, we see Aoyama watching Asami in her apartment. Do we see the mutilated man from the record label (a.k.a. “sack guy”) because Miike is simply revealing his fate for the audience's benefit? Or are we, instead, seeing Aoyama's own conclusions and assumptions? Did his previously gleaned knowledge about the extra tongue and fingers in the bar combine with his fears and uncertainties, creating a nightmare creature that represented his festering anxieties about Asami, and women in general?

I think it's probably a little of both. The final third of the movie is a kind of mind-meld between the two lead characters; the careless, selfish masculine and the deranged feminine. Aoyama mistakenly characterized Asami as an angelic figure placed in his path to provide nurturing companionship, taking the place of his late wife. Asami, given her own history, erroneously characterized Aoyama as another abusive, predatory male. The film cannot successfully function as a feminist revenge narrative because Aoyama's crime doesn't fit his punishment. His fake audition was deceitful, certainly, but it's clear that Asami had her plan in place long before she could have learned this. Ultimately, the torture scene emerges as a tragic outcome, unsettling in its inevitability. It doesn't end well for either of our lovers; instead it lays there, as do the bodies of Asami and Aoyama, in a grim and stubborn draw.

10+ years ago, I saw the torture scene as a woman's bloody, uncensored vengeance upon a man—standing in for men in the broadest sense—who'd had the power to toy with her, and shape her future. Now, Audition no longer feels like a war-of-the-sexes with one victor. Instead, it's a sad commentary on a quagmire that seems more timely than ever, and leaves both sides debilitated. Maybe that's not as sexy and doesn't carry the same cultural cachet, but for me the film has finally moved beyond its iconic image. Deeper, deeper, deeper.

Do you feel this content is inappropriate or infringes upon your rights? Click here to report it, or see our DMCA policy.
1999auditioneihi shiinajapaneseodishonryo ishibashiryu murakamitakashi miike