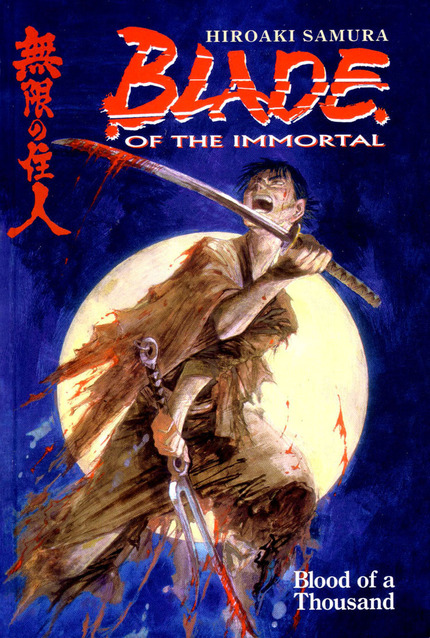 Another day, another project from one of Japan's most prolific and talented directors, Miike Takashi. His latest project is an adaptation of Samura Hiraoki's manga Blade of the Immortal (Mugen no Jūnin). The manga, which ran in serial form beginning in 1993, is the story of a cursed Ronin, or masterless samurai, who is damned with a body that cannot die, even from the most heinous wounds. The only way he can regain mortality is by killing 1,000 evil men as penance for a life of villainy.

Needless to say, the film should be pretty damn bloody, and to help counter the mayhem Miike has cast the J-pop heartthrob Kimura Takuya. Besides being an actor in both live action and voice acting for anime, Kimura is a member of the outrageously popular pop act SMAP. However, he's put in some great performances in film like Wong Kar Wai's 2046 and Yamada Yoji's Love and Honor, so he has some talent.

There's not a lot of footage in this first teaser, but I think it's pretty clear where Miike is taking this one. I'm envisioning lots of severed limbs and unsated pleas for mercy. As with anything Miike, I'll be waiting with high hopes to see how this one turns out.