Now on Blu-ray: Miike's BLADE OF THE IMMORTAL Shreds in HD 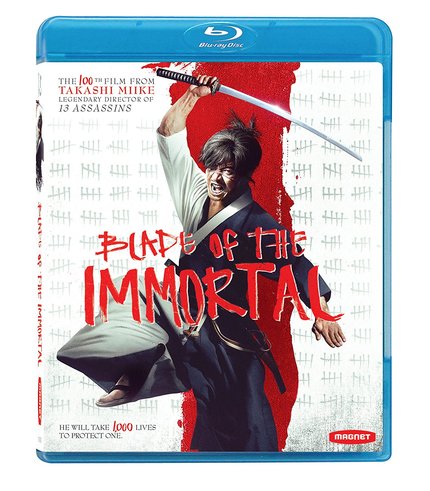 Miike Takashi turns 100(ish) with his latest full length feature, the adaptation of hugely popular manga Blade of the Immortal. The film stars Kimura Takuya as Manji, a swordsman cursed with immortality whose only way out of his hell of eternal violence is to kill 1,000 enemies. As he dutifully takes up the challenge, he runs into a young girl named Rin whose parents were murdered. Haunted by the spectre of his own slain sister, Manji takes Rin under his wing and goes on a journey to make all of this violence mean something by avenging the girl and possibly saving his own soul.

Guillem Rosset reviewed Blade of the Immortal when it screened at the prestigious Sitges Festival of Fantastic Films last summer and had this to say:

Being a fan of the original manga, I appreciate trying to be faithful to the source, but I cannot shake the feeling that the film sometimes is trying too hard to fill a checklist of characters and situations to keep the fans of the manga happy. Some of the characters and plotlines feel unnecessary for the overall plot, and it would probably have been better to get rid of them altogether. Newcomers to the material may have a difficult time as they try to wrap their heads around who's who.
Having said that, the movie manages to remain engaging and entertaining. Fight scenes are thrilling, and of course having a character who can withstand all kind of wounds without dying gives Miike a perfect opportunity to deliver a generous amount of blood and dismembering onscreen [...] Production values look solid all around, and the character looks manage to satisfactorily walk the line between faithfulness to the original characters’ design without looking like people straight out of a cosplay convention (which sadly is the case on some film adaptations).
So even though Blade of the Immortal never reaches the highs of Miike’s previous works like 13 Assassins, and even though it’s not as memorable as it should have been for his 100th film, it still is a quite enjoyable ride. Fans will be satisfied with the results, and people unfamiliar with the original source should also get a good thrill out of it. Congratulations Miike-san, we’ll be expecting the next 100 to come.
Guillem's opinion is fairly close to my own. At 140 minutes, Blade of the Immortal feels bloated. Even as the action sequences thrill, there is a feeling that it's all too much, there's no economy of storytelling here. The comparison to 13 Assassins is almost necessary as Miike hasn't made many swordplay films, however, the two films are trying to accomplish very different goals. 13 Assassins is a straight jidaigeki with action, while Blade of the Immortal is a fantasy film and manga adaptation, so the comparison really isn't completely apt. That being said, there is nothing in Blade of the Immortal that even comes close to rivaling the "total annihilation" sequence that closes 13 Assassins, and it's not for lack of trying, it's just all very exhausting.
The Disc:
Magnet Releasing has done right by Blade of the Immortal in terms of A/V presentation. The film looks at sounds spectacular, and I would expect nothing less from a new project.
Blade of the Immortal is also given over an hour of supplemental material to provide further context to the film, a rarity these days among newer films. There is a featurette documenting the Manji Vs. 300 fight that opens the film in which our hero slaughters a massive crowd of baddies. There's also a series of cast interviews, including lead actor Takuya Kimura, that are enlightening for fans, if a little dry in presentation. Overall, it's hard to fault them for what's presented here, though it isn't going to change anyone's mind about the film.
Blade of the Immortal is a must own for cult film fans on Blu-ray if only for the fact that it is the 100th feature from Miike, but it's hardly his best work.


Guillem Rosset contributed to this story.