Gamera Obscura: How THE MAGNIFICENT SEVEN Improves on SEVEN SAMURAI 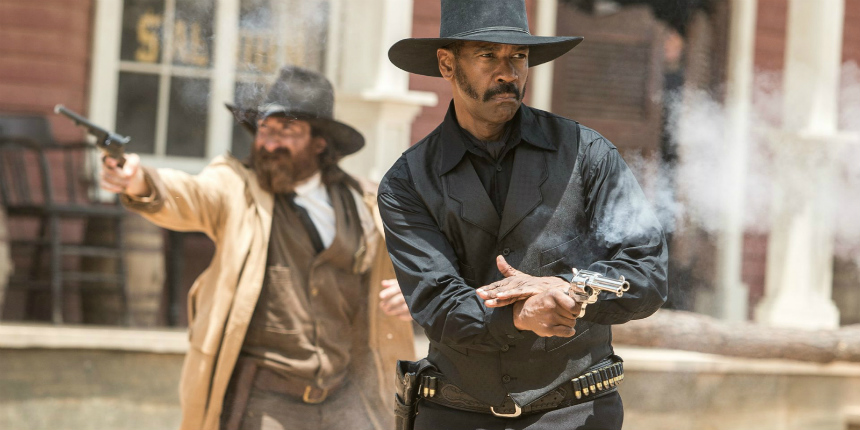 Neither the first nor, surely, the last person to argue how Antoine Fuqua’s The Magnificent Seven remake changes everything by changing the core story to one of revenge, I’ll strive to be original by contending that “everything,” in this case, doesn’t amount to much.

Don’t get me wrong. Seven Samurai is not only one of my all-time favorites, but also one of those special films that, as corny as it sounds, can change lives. It’s that powerful in terms of its message of heroic sacrifice… and of course that’s apart from the inspired filmmaking that pulsates from every shot. The latter is what keeps you watching it over the decades, allowing its narrative to shame you repeatedly with its tale of both selflessness and the mastery of that absent self.

That these ronin, so impoverished in number relative to the enemy, take on a mission without any personal stake in the outcome reinforces the Code of the Samurai vis-à-vis its honoring of honor itself and its embrace of the keep-Death-before-one-at-all-times creed. In fact, the important thing to recall about Kurosawa’s masterwork is not—and I say this after countless viewings, that’s my only evidence—the tremendous sorrow surrounding the fact that only three samurai survive. It’s that any of them survive.

That three of the seven don’t perish, as in Fuqua’s film, and as in Sturges’s 1960 film that’s the cultural bridge between the two, is nothing less than an act of grace—and that’s the underlying theme that keeps working me over, not the value of heroic camaraderie, not the high price of doing the right thing.

It’s just hard for us to recognize grace as such since we’re conditioned by most movies to react the opposite way, to feel blessed only when all the heroes are still standing, or at least all our favorite ones; we’re not supposed to feel grateful when there’s a survival rate of less than 50%, and the dead include the most charismatic characters.

Grace is the same feeling that the villagers must experience after the samurai initially show up, and then again after they’re successful. We shouldn’t take the final lines in the Kurosawa and Sturges films at face value:  this isn’t about victory, about winning or losing, but about the miracle that a battle took place at all, not a massacre. There’s no way either moviegoers or the villagers/townsfolk could have predicted the seven’s humble brand of nobility, their casual martyrdom for a cause that’s not really their cause.

And yes, I’m aware that by leading with concepts such as martyrdom and grace I’m guilty of seeing a Japanese film through a distorted Western lens; I’d argue, though, that that’s why Seven Samurai and Kurosawa’s work generally were for decades “guilty” of being disproportionately popular in the West compared to that of his peers—because their sensibility easily connects to Western canon texts such as the Bible and Shakespeare. In short, themes like these—along with redemption via violent death, a big one in the new film—are tailor-made for Hollywood audiences.

With this in mind, the hidden agenda of Denzel Washington’s Chisolm is off-putting on multiple levels. His vengeance-motive is not only at odds with his six compatriots, but his concealing of it from them (except for Ethan Hawke’s character, who knows better) is downright duplicitous; after all, his ostensible heroism, along with its implicit notion of (again) redemption, is partly what inspires the others to join him.

Moreover, Chisolm’s private vendetta strikes the thoughtful moviegoer or critic as simple pandering to today’s multiplex audiences—as if the only way we could “identify” with Chisolm while on his quixotic mission is to be mindful of his obliquely-presented personal interest in taking down the villain.

So… yeah. I wasn’t that crazy about any of this.

But then I recalled, as if dredging up a buried dream, the nasty, barbed thread of vengeance that runs throughout Seven Samurai. And then I decided to keep pulling on that thread to see what unraveled.

Of course as Seven Samurai’s story progresses there are both villagers and samurai whom we want to see avenged. Consider the final seconds of the battle, when Katsushiro cries in despair at the news that all the bandits are dead: now there’s no one he can kill to avenge the heroes who fell just moments ago. Vengeance denied is thus presented as more cruel than death itself.

There’s also the storyline of Rikichi, the poor farmer whose wife was taken by the bandits on a previous raid; his slow-burn of hatred and humiliation for much of the film ultimately results in his wife opting for literal immolation rather than returning to the village. However, even this act, while apparently motivated by shame, is really one of vengeance against the villagers, as explicated by D.P. Martinez in the brilliant “Seven Samurai and Six Women.” In effect, she shames them and their belated efforts to right past wrongs. And then there’s the unforgettable scene in which the elderly woman executes a captured bandit as retribution for her slain son.

Most compelling of all, though, is the implicit revenge of Kikuchiyo, Toshiro Mifune’s character. In what is perhaps the film’s most heartbreaking moment, Kikuchiyo saves an orphaned infant, then falls to his knees in anguish as a realization hits him:  the wailing child, backlit by flames, is recapitulating his own origins.

With all this in mind, it’s hardly a shock when the 2016 revision foregrounds the same revenge theme that its antecedents were content to leave in the background; the screenwriters probably reasoned that they weren’t changing anything too radically, that revenge was always lurking there in the source material. Besides, the script takes pains at the climax not to have Chisolm satisfy his hunger for vengeance, thus keeping him on the same moral playing field as his recruits.

The fact that the writers simply allow another character, played by Haley Bennett, to indulge in vengeance instead, as if a proxy for Chisolm, underscores the film’s ambiguous attitude toward revenge: exploiting it as needed, but taking care not to get its hands too dirty.  Indeed, that line of Bennett’s that's featured prominently in the advertising, about wanting righteousness but settling for revenge, pretty much sums up the ethos of Hollywood filmmakers and audiences. We like to imagine that we’re high-minded, but unless our darker, eye-for-an-eye instincts are acknowledged, either openly or on the sly, we’re apt to feel that something is missing from an action movie—perhaps any movie.

And that’s how this new version of The Magnificent Seven improves upon its predecessors: its shallow psychology and threadbare moral structure is instructive. We can learn something about such movies and, more importantly, about ourselves.

That doesn’t mean Fuqua has created a beautiful or memorable work of art but rather something that lays bare the complex audience-character dynamic when it comes to revenge; it’s not Manet imitating a Titian nude, but rather a cross-sectional diagram of the human body, the type that might be found in an anatomical atlas. By stripping away a layer or two of moral vanity, Fuqua’s film prevents us from ascribing more elevated, even edifying, motives to our protagonist.

To be sure, The Magnificent Seven is not a better movie experience than Seven Samurai, and it won’t change any lives. What it offers, though, is the unseemly, bloody truth that lies beneath a lot of content about grace, redemption, and heroism, a truth that most audiences are reluctant to consider, let alone admit:  all movies are revenge movies... if you look hard enough.

Gamera Obscura is a column about the ill effects of seeing too many movies over too many years. Peter Gutierrez also writes the Blockbuster Central column for Screen Education, and can be hunted down on Twitter @suddenlyquiet.

Do you feel this content is inappropriate or infringes upon your rights? Click here to report it, or see our DMCA policy.
Akira KurosawaAntoine FuquaDenzel WashingtonJohn Sturges

More about The Magnificent Seven (2016)

More about The Magnificent Seven (2015)