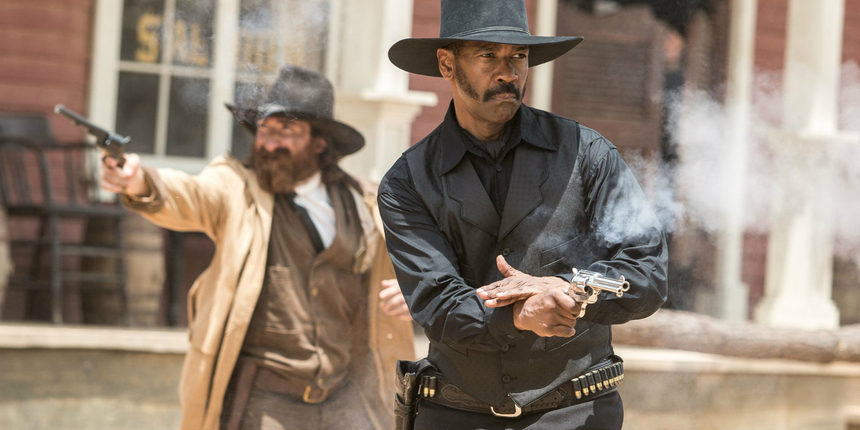 When you put the word “magnificent” in the title of your movie, you’d really better be able to live up to it. Except, in the case of director Antoine Fuqua’s The Magnificent Seven, the very title's been done before. For that matter, the whole movie's been done before, twice.

In 1954, when Akira Kurosawa made a three and a half hour film about oppressed villagers who hire a group of seven wandering warriors to fight on their behalf, he delivered The Seven Samurai, a cinema classic. Six years later, when John Sturges adapted it into a Hollywood Western, he wound up with The Magnificent Seven, a pretty okay movie.

That film, struck a cultural chord resulting in multiple sequels and a TV series many years later. People of a certain age will, to this day, wax enthusiastically about it. The cool duo in charge (Yul Brynner and Steve McQueen)…! The guy who throws knives (James Coburn)…! And perhaps, above all, the magnificent theme music by Elmer Bernstein - undisputedly one of the all-time great movie themes.

Whatever one’s opinion about the venerating of Sturges’ film, Bernstein’s main theme is one of the most rousing, grandly infectous anthems in film history. It makes one proud to be a film buff, prideful about cinema’s Western tradition (which was, in that moment, in a pronounced moment of flux) and excited about a merely halfway decent film. In some ways, it was the final button on the classic Hollywood Western tradition just before the spaghetti Western was served up, and changed everything.

Fuqua, naturally holds onto the theme, as to not gun down audiences’ expectations. Wisely though, he uses it most sparingly, and makes you wait for it. In lieu of Bernstein, we’ve got the late James Horner (no slouch himself in this department) sharing a credit with Simon Franglen. As Horner’s final credit, the music is entirely serviceable, although with three composers in the mix, it’s of course impossible to know who’s responsible for what (outside of Bernstein). The main thing is, all of the music evokes the Old West in a familiar yet contemporary way.

They say that every director wants or always wanted to make a Western. (Well, maybe not Billy Wilder.) Fuqua, with his genre spanning films, including Training Day, Tears of the Sun, and The Equalizer, has proven himself to be a semi-versatile if also overtly serious filmmaker. His sense of hard-earned palpable texture and believability is high on the list of what makes Fuqua’s film’s worth checking out. The Magnificent Seven is no exception. Fuqua’s world is fully convincing; in terms of characters and place, never is there a moment of Young Guns-esque inauthenticity. His attention to color, light, and sharpness in his images are a big part of what make his films stick.

That, and his casting. Even when his films fail to connect, the performances are generally reliable if not terrific. It’s not always easy to channel good performances into less than stellar material, as Kurosawa’s original tale, in this permutation, has an almost desperate, long in the tooth quality.

In the lead, stepping into Brynner’s part, is Denzel Washington as a man with a secret and very little dialogue. Fuqua is credited with directing Washington to Best Actor Oscar glory for Training Day. Since then, the pair’s re-teamings have yielded increasingly lesser results.

The Equalizer, another violent adaptation about a do-gooder of few words, is an under-appreciated B-movie morality revenge fantasy with A-list resources. Here, Washington is, like so much else of the movie around him, gamely utilitarian, even as the film finds room for his own usual religious themes and notions. Something about deliverance through bloodshed... It’s good to see the great actor in a Western, but at the same time, one wonders what better projects he turned down in order to stay loyal to Fuqua.

A big goal of this film seems to be to satisfy today’s viewers whom insist on clinch-toothed badassery. It ain’t Deadwood, or even the 3:10 to Yuma remake, but this Magnificent Seven is nothing if not a mainstream, watchable, a high-bodycount-yet-bloodless time passer. But it should be more fun.

So, enter Chris Pratt. Occupying the Toshiro Mifune/Steve McQueen role, Pratt’s supernova magnetism is most welcome, if a bit out on the range in this otherwise dour affair. While his scenes, rife with card tricks and funny quips, are good in their isolated moments, their “Chris Pratt rewrite” nature sticks out like a sore thumb from even a minor distance.

In 2016, diversity is clearly a thing here, and it plays as plausibly as it can. Just missing the inner circle of The Seven is Haley Bennett, a vengeance-fueled widow who spearheads the recruitment of the gunslingers. Bennett is respectable as wronged frontier woman, doing her very best Jennifer Lawrence.

In today’s world of remakes that are spearheaded purely on the basis of previously established name recognition, Fuqua’s The Magnificent Seven fits in with the newfangled versions of Ghostbusters, The Pink Panther, and whatnot. These movies are, in comparison to their beloved namesakes, as bloated as they are unnecessary, or unwanted. They’re not terrible, but they’re not memorable, either. Far more was spent to make these updated, tweaked but familiar versions, and in the end, they will all amount to footnotes.

That said, The Magnificent Seven 2016 is worth talking about, at least to some extent, in the here and now. Peter Sarsgaard plays an evil land baron intent on bullying the citizens of a generic Western frontier town out of their homes in exchange for next to nothing. Sarsgaard plays the part with no more than his standard level of greasy sleepy-eyed contempt.

In the wake of various real-world economic disasters rolling downhill onto the heads of powerless many, some aspects of Sarsgaard’s unflinching sawed-off rhetoric may strike a vague, post-recession chord or two. But even saying that may be giving the film too much credit. The fact of the matter is, by the end of the 2 hour and 12 minute glossy/gritty and self-serious film, the question of why it was made now (or at all) remains. According to his recent NPR Fresh Air interview, Fuqua just wanted to see leading man Denzel Washington ride in through the desert heat in all black. In that case, the film achieved what the filmmaker set out to do.

The Magnificent Seven 2016 won't make Western fans of contemporary viewers, and certainly won't make anyone proud to be a cinema buff. It might in fact not be magnificent, but this is one such remake that adds up when, and only when it needs to.

More about The Magnificent Seven (2016)