Japanese studio Toho resurrects Gojira, its most famous monster, in a modern day drama that mixes action with bureaucracy.

The latest installment in the long-running series, Shin Godzilla (aka Shin Gojira, aka Godzilla Resurgence) is a reboot that seeks to imagine what it would be like to be threatened by a giant monster in the modern day.

As with many disasters of late, there is little prelude before the monster emerges from Tokyo Bay and begins rampaging through a river, thrusting boats and other water craft flying through the air in a mass of destructive activity. (I've been told by a friend who lives in Asia that this was clearly inspired by a real-life disaster in Japan, with boats tossed into the air in similarly scary fashion.) Caught unprepared, the Japanese government races to respond, an army of men, and a few women, in business suits scrambling as they struggle to formulate a plan of action that will best preserve life.

The monster, eventually dubbed Gojira (in English, Godzilla), begins as a lizard-like creature with big, dead eyes and tiny, stubby feet. It's a force of nature that springs out of a nightmare, moving inexorably forward through Tokyo, wreaking incredible damage until, unaccountably, it stops. The politicians and bureaucrats and administrators and scientists are caught off guard. They stab at the air with ideas and propositions and demands and suggestions.

As the suits discuss and debate and eventually submit their plans to the prime minister, Gojira evolves. That's to be taken in a literal sense: the monster evolves into something resembling the creature from Ishirô Honda's original 1954 film, a huge, terrifying beast that breathes fire and bellows in a prehistoric manner. (The war cry from the original is mixed in with new sounds; it's a deep and disturbing roar that sent chills down my spine.)

The new film varies in tone, readily integrating comic relief throughout the many scenes of bureaucratic incompetence and infighting. Further ridicule is heaped upon a secret representative of the U.S. government, a Japanese-American woman who arrives dressed in chic clothing. (She didn't have time to change.) But as the dimensions of the disaster grow, the humor is properly pushed into the background. 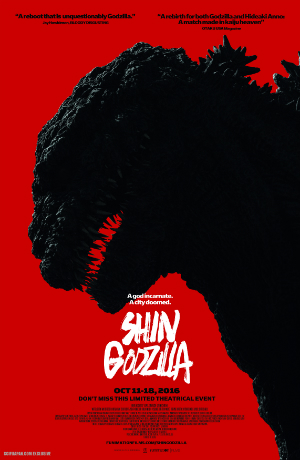 Hideaki Anno wrote the screenplay and directed with Shinji Higuchi. Anno is an animation veteran (Evangelion) with considerable experience as a storyboard artist, and Higuchi most recently helmed the live-action Attack on Titan. He too has experience in animation, and the two men have worked together before. That probably explains why the action sequences are so well-staged, yet the script reveals a greater ambition.

Indeed, when the theme music from the original is added to the mix, sounding like a death march as the Japanese forces fail to contain the beast, the tone of the movie becomes quite dire. The United Nations takes action to tell Japan how to handle things, without offering much in the way of practical assistance.

It's impossible to forget that the original 1954 Gojira was a cry of anguish and anger, and the new version seeks to tap into those feelings. While the surfeit of bureaucratic affairs cuts against the narrative momentum, there is no denying the effectiveness of the action scenes. The special effects are generally convincing, too. A genuine mood of desperation and despair sets in, and for all the juvenile joy that may be stirred by the thought of 'Godzilla destroys Japan (again)!,' the reality is far graver.

Superheroes may now rule cinemas worldwide, but in the real world, monsters are still among us, and it's up to us to figure out how to live with that. Shin Godzilla is a fantasy, of course, but it's filled with grey skies and bleak landscapes that reflect the damage done, and the threats that still lie ahead.

The film enjoyed its North American premiere at Fantastic Fest. It will open in select U.S. theaters on Tuesday, October 11 for a special one-week engagement, via Funimation. It will be presented in Japanese with English subtitles.

Do you feel this content is inappropriate or infringes upon your rights? Click here to report it, or see our DMCA policy.
Fantastic Fest 2016GodzillaGojiraHideaki AnnoJapanShinji Higuchi