Destroy All Monsters: GHOSTBUSTERS Got Rid of Capitalism; Can We, Too? 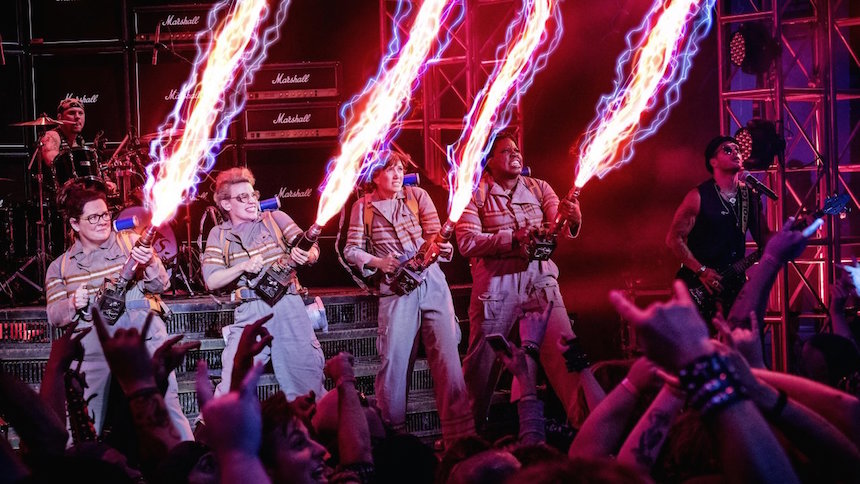 I suppose the best thing that happened this past weekend, pop-culturally speaking, was that Ghostbusters finally came out, and more than lived up to both the original premise (bustin' ghosts!) and the new one (ladies bustin' ghosts!).

To clarify, because clarification is disturbingly important on any article which hosts a comment section, this is not a review of the film. (Jim Tudor reviewed Ghostbusters for Screen Anarchy here. I also wrote about the way we discuss the film's haters last week; and Peter Gutierrez had a great take on our relationship with nostalgia, as it relates to the film, in his column.)

I can't resist saying that I loved Ghostbusters '16 - yeah, actually loved it, much more so than I expected to - and by sheer dint of my having said that, several users (the majority, I will hazard a guess, will be male) will take this opportunity to insert themselves into the conversation* and tell me why I'm a) wrong, b) stupid or c) whatever other fool thing is on their mind, which has so completely occupied their brainmeats as to allow them to entirely miss my point. This happens about weekly around here, at least from my perspective.

(*males, after all, insert themselves. It's what we do. It's ALL we do, Terminators!)

But to get on with it: yeah, the movie's out, and it was more than up to the task of meeting the bowshock of skepticism and outright villainy conjured up by its premise. After two years of white-hot scrutiny and - as we all well know - a shit ton of advanced horribleness from the worst parts of the "fan" community, this was nice to see.

Then Monday happened, and those same purveyors of advanced horribleness went after Leslie Jones.

OK, it wasn't a Monday thing. Being as that she's a woman of colour on the internet in 2016, I would have to imagine that Jones fields racist, misogynist, violent hate messages on a pretty much daily basis, via her Twitter account, and probably everywhere else. That's the America she lives in right now, one which very few people seem to be dealing with on a perspective basis. With recent police executions of Black men leading to the assassinations of police officers in Baton Rouge and Dallas, we are genuinely staring down the barrel (yes, pun intended) of a tipping point - but please, keep telling me about Pokemon Go.

Jones took Monday as the opportunity to let the rest of us in on the conversation as she's been experiencing it, and it was abjectly horrifying; or at least, it was to those of us who think that Black women are, I dunno, people... which I suppose is a somewhat smaller proportion of the population than I'd originally hoped.

The exposure of all of this then led, as these things do, to the de rigueur conversations on Twitter and elsewhere about why Twitter doesn't do something more aggressive about protecting its vulnerable users from this kind of behaviour from other members of its community. And though few people ever seem to want to admit it - complex schemes for how Twitter could re-wire itself to deal with trolls were this week's answer to the Pet Rock - the answer is actually pretty simple:

All activity is good activity, in the capitalist ecosystem of the internet. All activity. Articles like this one - right here, the one you're reading! - are just hoping that enough people get into the conversation (excitedly, angrily, or otherwise) to make the page go viral and drive traffic into the system, cuz dollarz. Twitter's a publicly traded company, and this is 2016, and the United States of America has existed for a long time. Does everyone really need capitalism explained to them again?

(Look, maybe this time they will do something. The thunder on this has been pretty loud, and that's bad for business. But still, it's business. They banned Nazi ringleader Milo Y last night, but he's one user. When the cost/benefit analysis of "kick out the trolls" vs. "lose the users who are sick of this shit" tilts in favour of the latter, Twitter will finally change its approach to abuse. Follow the money.)

OK, back to the Ghostbusters. One of the things I've always admired about the 1984 film, and have enjoyed tracking in context ever since, is that film's stalwart, Reagan-era conservatism. That shit was some free enterprise, small government Americana right there. To create a spine upon which to hang a potentially-daffy story about three scientists-cum-ghost exterminators, Harold Ramis, Dan Aykroyd and Ivan Reitman cleverly grafted the mythology onto a very relatable idea: three entrepreneurs just trying to start a business. They get kicked out of academia, have to make do, and follow pretty much the only avenue of opportunity open to them: they monetize their ghost-hunting idea.

We all love to make fun of Walter Peck (I have an action figure of him!), but it's always worth pointing out that the villain of Ghostbusters (well, aside from Gozer) is essentially environmentally-motivated government oversight. Dickless is a bit of a dick about it (he'd have to be, wouldn't he?) but he's basically right. The ghostbusters are running around Manhattan with nuclear accelerators on their backs, for crying out loud. If anyone tried that today, Homeland Security would disappear them.

So, one of the things I greatly admire about the 2016 Ghostbusters is that although Erin, Abby, Holtzmann and Patty are absolutely in some kind of business (they have a receptionist, after all - yay Kevin!), it definitely isn't the spine of the story, and in fact almost seems like an afterthought - to them, and to the movie. They're scientists first and foremost, which adds another notch to the belt of representation that Ghostbusters faithfully fills out: women in STEM.

If young women and girls sorely need the sheer adrenaline kick of seeing Holtzmann go fully two-fisted John Woo on a pack of ghosts in the film's finale (a moment as iconic as Rey picking up the lightsabre in The Force Awakens, for girls in general, and LGBTQ youth in particular), they definitely also need role models for whom a career in science and technology is attractive and worthwhile, even if such a path also (per the film's actual story spine) currently requires them to work even harder than men to establish their legitimacy. In Ghostbusters' cosmology, the real victory at the end of the movie is that maybe soon, they won't have to.

Of all the new film's innovations, this quiet one might just be my favourite. In transitioning from male to female, it also transitioned away from raw capitalism as the driving engine of its story, and towards more relevant values of self-worth - perhaps intuiting, rightly so, that people who unabashedly pursue free enterprise these days are the assholes we make Wolf of Wall Street about, not the next big adventure franchise. At least, not if you want your franchise to be about heroes.

About ten years ago, when the question of Ghostbusters III was still up in the air, I thought it would be fun to circle back on the original film with the original cast and have the story built around the idea that Walter Peck had been right all along - that in ghostbusting, as in every other industry (twitter included), following the capitalist model just inevitably turns you into the bad guy. ("You either die a hero, or...").

Or, with respect to Twitter and Leslie Jones' trolls, you find that sustaining your financial success inevitably forces you to align so tightly with the worst members of your consumer base that the distinction between hero and villain might as well be moot. This is the system; the system does not have a moral or social agenda. This is the way it's supposed to work, and that makes it all somewhat violently contrary to our interests as the people caught within it.

I dunno. In all the blather about whether this Ghostbusters movie should have been made (Hollywood is a capitalist industry, after all), I think we might have missed the best reason of all: the opportunity to jettison a bunch of outdated ideologies that sort of broke the world, and just focus on how cool it is to be a ghostbuster. Wish it were that simple for the rest of us.

Do you feel this content is inappropriate or infringes upon your rights? Click here to report it, or see our DMCA policy.
GhostbustersGhostbusters 2016Ivan ReitmanPaul Feig