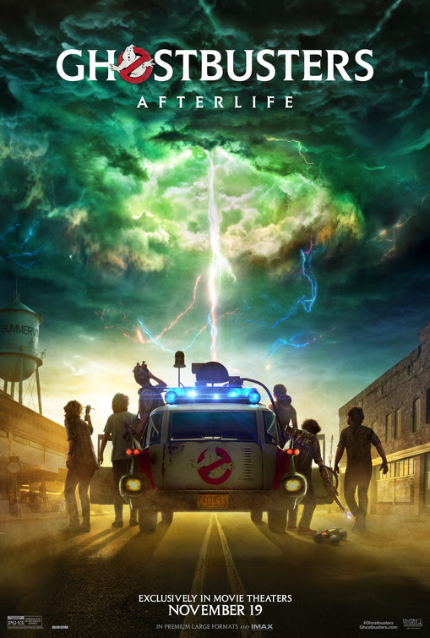 Who you gonna call?

Moving the action halfway across the country to wide open spaces in Oklahoma allows room for writers Gil Kenan and Jason Reitman to devise an entirely new scenario for a family of three who are seeking a new life.

Single mother Callie (Carrie Coon) and her children, teenage Trevor (Finn Wolfhard) and 12-year-old Phoebe (Mckenna Grace), travel from their home in a big city on the East Coast to the middle of nowhere (i.e. Oklahoma, US) in order to sort through their inheritance from Callie's father, known locally as 'The Dirt Farmer' because he never grew anything on his large property outside of town.

Callie never really got to know her father, who abandoned the family in her youth for parts (and reasons) unknown to her, so she's not surprised that the inheritance amounts to nothing more than a mountain of debt and a dilapidated house badly in need of repair. Frankly, she's never been very good with money herself, and since her family was, in truth, evicted from their home, she needs time to sort things out and figure out what to do.

Left at loose ends, Trevor finds his way to a local drive-in restaurant, the only place for teens to gather; he nabs a job and also crushes on the beguiling Lucky (Celeste O'Connor). The far more studious and flat-out brilliant Phoebe, meanwhile, is bored on the first day of summer school, gains a new best bud (Logan Kim) nicknamed Podcast because he is always podcasting, and also strikes up a kinship with her teacher, Mr. Grubberson (Paul Rudd), a seismologist who's slumming his way through class by showing his slumbering students 80s horror videos.

Though it plays like an amusing grace note at first, the inclusion of specific 80s horror movies (Cujo and Child's Play) on videocassette reinforces the 80s motif that director Jason Reitman has already introduced, a theme that becomes a strong current running throughout the entire movie and links it firmly to the original Ghostbusters (1984), directed by his father, Ivan Reitman.

In his own career, Jason Reitman has studiously avoided swerving anywhere close to mainstream Hollywood productions. Some of his early films, such as Thank You For Smoking, Juno, and Up in the Air, have proved to be both popular and critically acclaimed, while his last few films (Young Adult, Labor Day, Men Women & Children, Tully, and The Front Runner) have met with diminishing results. Certainly, he's developed his own distinctive style of filmmaking, often bristling and sour; though I usually appreciate what he's endeavoring to do and sometimes accomplishes, I was not highly anticipating his take on his father's two ghostbusting films, especially after Paul Freig's Ghostbusters (2016) smartly remade the original for modern audiences, whether they wanted it or not.

Indeed, the film was evidently hatched from the younger Reitman's brain, but pleasant strains of co-writer Gil Kenan, director of the Poltergeist (2015) and, most notably, Monster House (2006), waft through the tale as well. Clever and amusing, Ghostbusters: Afterlife (2021) often feels more like an independent production than a typical mainstream Hollywood affair, though the special visual effects, when they arrive, reflect the undoubtedly bigger budget.

Carrie Coon and Paul Rudd anchor the film, but the true star is Mckenna Grace as the no-nonsense Phoebe, who keeps trying to tell intellectual jokes that everyone acknowledges are funny, yet make almost no one in her immediate vicinity laugh. She is the rock-steady backbone that allows everyone else to go crazy, including Jason Reitman, who has made a loose-limbed comic adventure that is far better than it has any right to be.