Gamera Obscura: GHOSTBUSTERS and Why Your Childhood Should Be Ruined 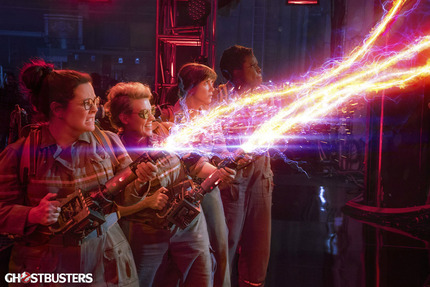 Movies like Gremlins, Ghostbusters and Temple of Doom filled me with WONDER in 1984. Movies like Ex Machina, Neon Demon and The Nice Guys fill me with WONDER in 2016. My tastes have changed over the years, and that isn't a bad thing, nostalgia reminds me of what I fell in love with in the first place.

Kubrick, Hitchcock, Keaton, Weir, Wilder, Donen, Antonioni, Verhoeven, Spielberg and so many more will always fill me with WONDER, whether on rewatch or on discovery of a film of theirs I've just seen.

I'm not going to see this movie. Not now, not ever.

Not because it has women. Not because the original movie. Only because I think is bad.

And no publicity campaign will change my mind.

Wonder really is that bonafide magic in the movies. Peter, I love how you take us on a journey with this piece. There have been so many articles as of late that get in and around GB, including Matt Brown's excellent work. But yours is the first I've read to both aim wider and get deeper with some core metaphysics of moviegoing -- truly wondrous.

I gotta say man, this article talked me off the ledge. My knees were bent, ready to jump. My favorite movie has been remade and I thought there was no going back and yet, these words made it acceptable to refuse to accept the new as the norm. Thank you.

I think this is dead on. The one thing I in this op ed I would contest is the suggestion that a state of wonder is a matter of choice ("Your childhood is not partitioned off unless you say it is. Wonder, and the capacity for it, is ongoing -- part of who you are.") We didn't choose to be in a state of wonder when we were kids, we simply were, by whatever it was that put us in that state. And same for when we're adults - the things that made me marvel when I was 12 simply can't elicit the same responses from me these days. I got chills when I watched Jurassic Park and Independence Day, but I think the window for such blockbusters affecting me to that degree is well and gone. But that isn't to say NOTHING can make me marvel, it just means it won't be the kinds of films or the kinds of adventures that once did. I have no more choice in the matter of my wonder than I ever did. We know what thrills us when we encounter it.

This kind of stuff makes me groan. If mainstream film making doesn't want its audience to fetishize their "childhoods," then maybe it starts with contemporary film makers. Oh, they can't think of anything else to sell you but your daddy's favorite brands, but they want you to pretend you're all engaged together in something that deserves a fresh take. They don't provide new "wonders" and blame you for bringing up old "wonders" in comparison. Meanwhile, the entire exercise is designed to reinforce the same-old-thing.

Frankly, Ghostbusters never appealed to me in the first place, thirty-more years ago. Explain to me, again, how my imagination must be at fault.

The one thing to keep in mind is that no matter what any of us think or say or do nothing is going to stop them from doing it, because all they care about is numbers on a chart. And if those numbers add up the way they want them to then that's what they're going to do.

Max Landis went in with a fairly compelling pitch for GHOSTBUSTERS 3. You can read it on his website. And he was VERY confident he had the job. Then it went cold and when he asked why he was told two words: Paul Feig.

Feig had the box office and had caught the cultural zeitgeist of female-lead comedy, so it went to him.

This is definitely better than hacks at Destroy.

Shocker: The film is pretty good.