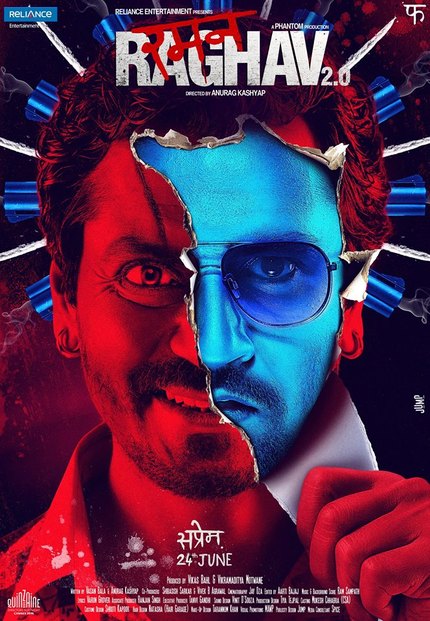 In a nation with over a billion residents and an annual output of nearly two thousand feature films every year, there is one name that stands out from the rest and has become the face of the Indian film industry, and that is Anurag Kashyap.

With Kashyap's breakout Cannes hit Gangs of Wasseypur (2012) the film world was forced to stand up and take notice as the five and a half hour gangster epic brought critic after critic to their knees. While it took three years for Wasseypur to find a domestic theatrical release through Cinelicious Pics in early 2015, the word was already out and big shots like Martin Scorsese and Paul Shrader were quick to lavish praise upon the new shining star of Indian cinema. However, that it wasn't exactly all it was cracked up to be for Kashyap, who has found his own path in India fraught with potholes as he's tried to continue blazing his own trail in a country where freedom of expression is given a lot of lip service but not a lot of support.

Kashyap returned to Cannes in 2013 with his ultra gritty kidnap thriller Ugly, a film populated by character actors doing horrible things to one another under the guise of recovering the step-child of a local police inspector. The film was praised at Cannes, but back home it wasn't quite so easy. While Ugly was passed through the notoriously prickly Indian censor/certification board with relative ease, the print was to be marred by government mandated warnings against smoking and drinking. Over the last few years these warnings have become more and more intrusive, evolving from written and spoken warnings before the film into watermarks inserted into the actual runtime of the film anytime a character smokes or drinks alcohol or there is even the insinuation of alcohol on screen.

Kashyap fought against sullying his film with these hard to ignore warnings, but after a year of getting nowhere he was ultimately forced to acquiesce and the film found theatrical release in India in 2014, but not overseas like most big name studio releases in spite Kashyap's recent coronation as India's de facto embassador to the film world. A few months later the film would find its way to Netflix around the world, but without a whole lot of fanfare. As if that kick in the balls wasn't enough, there was Bombay Velvet.

As his follow-up to the very direct, very indie Ugly, Kashyap moved on to Bombay Velvet. This was envisioned by most of his admirers, if not by him, as a coming out party. Bombay Velvet was to feature big name stars, a bigger budget, tons of production design, a period setting, and a grander scale than Kashyap had ever worked with. Still set among Bombay gangsters, albeit those of the '60s rather than the present day, Kashyap's Velvet was savaged by critics at home even as it managed to find a bit of praise overseas in festivals. The film was released Stateside concurrently with its Indian release and when I saw it I was initially disappointed, though subsequent viewings definitely changed my mind about it. As a result of it's critical and box office failure, Kashyap declared that he was determined not to repeat his mistakes and only reveal his next film when it was ready to go. That next project was Raman Raghav 2.0.

Having premiered at the Cannes Director's Fortnight last month, Raman Raghav 2.0 bursts into Indian cinemas this weekend like that champ who lost his last fight and is determined to take back the title. Far from the pomp and extravagance of Bombay Velvet, Raman Raghav 2.0 is dark and gritty, a return to the cinematic oeuvre that made Kashyap famous, and it is a masterpiece of violence and psychological terror. To say that Kashyap has bounced back is the understatement of the century, this is the dangerous, unpredictable Anurag Kashyap that the West fell in love with after Wasseypur and wait until they get a load of him now.

To put the film in context for those unfamiliar with famous Indian criminal history, Raman Raghav 2.0 is named as such because it is a film that takes its inspiration from a famous serial killer from the '60s by the same name. Word on the street is that Kashyap had initially planned to make a dramatization of Raman Raghav's exploits based in that decade, but after the spectacular financial failure of Bombay Velvet, he thought better of it. The result is a film inspired by that killer set in the present day, hence the “2.0” moniker, it is a reboot and reimagining of the Raman Raghav folk lore through a modern lens in the slums of modern Mumbai. Only this time, the killer isn't alone, he's paired with a pursuing cop who may have more in common with the murderer than he cares to admit. It is this fascinating dynamic in Raman Raghav 2.0 that makes the film work on so many levels.

Sindhi Dalwai, a.k.a. Raman (Nawazuddin Siddiqui), is a killer without remorse or regret for the vile things he does. He cuts a swath through the Mumbai slums leaving corpses behind him for the cops to pick up. He does so the way you or I would order a cup of coffee. On his trail is Raghavan (Vicky Kaushal), a cokehead cop with a violent streak and anti-social tendencies. When Raman comes face to face with Raghavan when the former is picked up for questioning, he sees something more than an adversary, he sees a soulmate. As Raman's homicidal urges begin to ramp up, Raghavan's ability to maintain his mask of sanity deteriorates, until the two become inextricably linked like yin and yang.

From the first frames of Raman Raghav 2.0, it is very clear that Kashyap does not care about appearing pretty on screen. The two leads, Nawazuddin Siddiqui and Vicky Kaushal, are clearly men made for filth, although their inverse evolution through the film is fascinating to watch. Siddiqui's Raman is a consummate professional when it comes to murder. He's unapologetic and his bluntness with the police who question him about the deaths of several people close to him makes them believe that he's got to be pulling their legs. He's so up front about his exploits that they label him a loony and set him free. He's slick and confident, the human avatar of Freud's Id, a man who has urges, acts on them, and feels no compunction to regret it.

Vicky Kaushal's performance as the unhinged cop Raghavan, on the other hand, is a masterpiece of compartmentalization. Unlike Raman, Raghavan plays two roles in the film, that of the dutiful cop, and secondarily the madman who explodes the instant he is free from obligation. One can almost feel Kaushal vibrating with rage anytime he steps into his police uniform, he is nervous, as if he's mere inches from being found out by those in his charge. From time to time he'll slip, let his madness leak out in tiny pieces, but never long enough to be found out. When Raghavan snaps, he snaps big time, and there will be blood, though he's less confident in his calling than Raman, so he tries very hard to keep it secret. If Raman is the Id, Raghavan is the Ego; he has the urges, and knows that they are wrong, but can't help himself. Together they make the perfect psychopath, an Id and an Ego without a Superego to keep them in check. Raman's confidence combined with Raghavan's savagery are a very dangerous mix.

The roles as they are written leave a lot to the performances of Kaushal and Siddiqui in terms of their abilities to hold the film together. Thankfully, these characters could not be in more secure hands. Kaushal's Raghavan is a ultilitarian monster in the skin of a protector. He uses his position of influence to manipulate those around him without a lot of tact or suavity. As his ability to cope deteriorates, so does his appearance, both physical and emotional. He goes from a clean shaven policeman with a secret to a seething unkempt beast whose behavior becomes more and more irrational as the film wears on and he begins to understand his predicament. However, it is Siddiqui who truly is the engine on which Raman Raghav 2.0 runs.

As written by Kashyap and his regular partner Vasan Bala (director of fellow Cannes 2012 alum, Peddlers), Raman is a consumate storyteller, and it is this quality that allows him to hide in plain sight for most of the film. Siddiqui is given several monologues in the film, each of them astonishingly well-performed. What could easily be misread as expository masturbation is instead careful and precise character development that Siddiqui raises to the level of art. Nawaz is no stranger to fans of Indian independent cinema, but this performance ranks among his best. Regardless of what you think of the rest of the film, there is no denying Nawazuddin Siddiqui's quiet domination of the screen any time he is on it. As a converse comparison to Raghavan's desintegration, Siddiqui's Raman visibly evolves throughout the film to become more and more certain of his destiny, and that of his unwitting opposite. It's a brilliant, almost invisible physical transformation that only really hits you several steps away from the cinema, and that makes it all the more impressive.

Beyond the amazing performances in the film, Kashyap's staging of Raman Raghav 2.0 is some of his most impressive in ages. In a defiant act of reclamation, the film takes back the streets that Kashyap ceded in Bombay Velvet, replacing the glitz and glamour with the filth and bile that coated the souls of his characters in films like Ugly. Only this time, the film isn't about the corruption that runs rampant at every level of Indian society, instead it is about the monster in all of us, and how we manage to keep that in check and what happens when that instinct to do-right never developed. Kashyap bounces back and forth between the dens of hedonism in Mumbai, the late night discos, and the filthiest parts of the city, showing how closely related they are and how one can't survive without the other.

The imagery of neon reflecting off of the dingy puddles of the Mumbai slums used in much of the promotional art is right on the money. Raman Raghav 2.0 is not a morality tale, it's not a story about the struggles of Indian economic expansion, it's the story of two men from opposite ends of the spectrum who attract one another even as as undeniable repulsion pushes them apart. It's a love story where only one of the partners knows they are in love. Just as I would do anything for the one I love, Raman seeks to protect and guide Raghavan as his journey of self-realization begins.

Raman Raghav 2.0 is a stunning, violent, and complex work of art. This is the film I was waiting for, and Anurag Kashyap and his team have not disappointed.