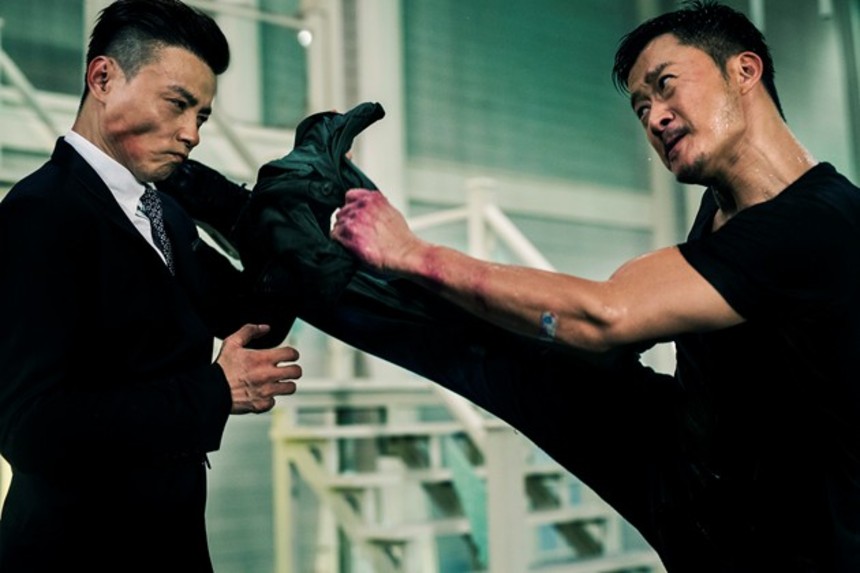 Never fear the “2” in the title of Soi Cheang’s deliriously baroque, thrillingly action-packed extravaganza Kill Zone 2, better known in Asia (and to early film festival viewers) as SPL 2: A Time for Consequences.
This is a follow-up, but decidedly not a sequel, to Wilson Yip’s 2005 original, a modern action film classic that toplined Donnie Yen and Sammo Hung. Therefore, absolutely no familiarity with the original SPL or Kill Zone is required. Yen and Hung are absent this time around; the only elements this new iteration shares with the original are its title and returning players Simon Yam and Wu Jing, playing completely different roles in a completely different plot.
And what a plot it is; it’s extremely convoluted – yet not hard to follow – and as full of as much tear-jerking melodrama and sentimentality as it is full of cracked heads, snapped necks, and slashed flesh. As audacious as the masterfully staged setpieces and hand-to-hand battles are – which I guarantee will at times leave your jaw hanging open – it’s equally audacious in wedding all this action to a plot that contains so much contrivance, coincidence, and convenient serendipity, TV soap opera writers would find it implausible.
But if that sounds like I’m knocking this film, I most assuredly am not; the absurdity of the coincidences and the outsized melodrama of the film are part and parcel of what makes Kill Zone 2 so fun and enjoyable to watch. These plot elements are as much an integral part of the film as the copious, and impressive, martial arts action on display; the fact that Cheang and his collaborators manage to make it all work so well makes this movie something of a minor miracle.
Equally impressive is the large geographical canvas the film covers, adding more complications to an already complicated story. Kill Zone 2 splits its action between Hong Kong and Bangkok, vividly depicting the criminal underworld of both venues. Also, no less than four languages are spoken here – Mandarin, Cantonese, Thai, and English; five, if you count emoji.
To oversimplify the plot a lot, we begin with Kit (Wu Jing), an undercover Hong Kong cop so deep undercover that he’s developed a raging drug habit – just to fit in, you know? Normal police procedure. He’s infiltrating a gang that kidnaps people and sends them to Thailand to harvest their organs; he’s getting close to nailing the kingpin, named Mr. Hung (Louis Koo, nearly unrecognizable underneath a stringy gray moptop).
But somehow, despite all his best efforts, his cover gets blown and he ends up in a Bangkok prison, trying to no avail to convince the guards and warden that he’s really a cop. Meanwhile, Kit’s superior Wah (Simon Yam) – also Kit’s uncle – goes all out to rescue Kit, as well as get Mr. Hung into custody.
Working in the Bangkok jail is Chatchai (Tony Jaa), a police officer moonlighting as a prison guard. He desperately needs the extra cash to care for his daughter Sa (Unda Kunteera Yhordchanng, adorable enough to bring a tear to one’s eye), who’s striken with leukemia and will die unless she gets a bone marrow transplant, and fast. Because of his need for money, Chatchai turns a blind eye to the clearly illegal acts occurring under his watch; the prison is being used as a way station for the organ harvesting operation run by Mr. Hung.
All these activities are overseen by the brutal, and totally corrupt, prison warden Ko Chun (Zhang Jin), who could have been a perfect model for ZZ Top’s song “Sharp Dressed Man.” Whether he’s cracking prisoners’ heads or battling cops trying to get to his boss Mr. Hung, one can rest assured that nary a strand of his slicked-back hair will be put out of place, nor his impeccably maintained sartorial splendor be disturbed.
As just one example of the magical serendipity liberally employed throughout the film, who just happens to be the perfect bone narrow match for Sa? No points for guessing that it’s Kit, who conveniently lands right in desperate father Chatchai’s lap, though he doesn’t know that at first. Also performing wondrous magic in this movie are smartphones, which work just fine after being submerged for many hours in Hong Kong’s harbor, and which possess the most accurate multi-language voice translator app ever created.
But such plot contrivances, which would probably sink any other film, here provide solid support for some of the most eye-popping and masterfully staged action setpieces in recent memory. Just a few examples: the multi-level prison riot, shot in one seemingly unbroken take with a digitally assisted roving camera, which very nearly one-ups a similar one in The Raid 2; a protracted shootout in a Hong Kong cruise ship terminal; and the grand finale in a gleaming high-rise with blindingly white interiors.
Not for nothing are key scenes in Kill Zone 2 set to the operatic strains of Mozart and Vivaldi; the incredibly talented martial-arts fighting trio of Tony Jaa, Wu Jing, and Zhang Jin prove themselves to be grandly physical players worthy of such bravura accompaniment. Soi Cheang has created with Kill Zone 2 a lovely, visually stunning paean to bodies and objects in movement that is wondrously thrilling from the first frame to the last.
Kill Zone 2 opens in New York on May 13 at Metrograph. For more info and to purchase tickets, visit Metrograph’s website. For showtimes and theaters across the U.S., visit distributor Well Go USA’s website.

I thoroughly disagree and I feel that everybody should be made aware.

Agree. This review is way too generous. It wasn't bad, it just doesn't do enough to stand above the pack.

I need to note a particular scene hat threw me. At the 55th minute we get to see for the first time the fighting skills of the warden. He walks amongst the rioting prisoners and does a roundhouse kick. The guard next to him points his walkie talkie at 5 prisoners and fires it like a gun - killing them all. I had to watch it 6-7 times to make sure I wasn't dreaming. The warden even turns to him and says " who gave you the order to fire" WTF?

Can someone please confirm?

I remember this, and me and my friend had to rewind it a couple of times. I have no idea what happened there. The budget ran out before the CGI artist could paint in a gun?

I just wrote like 3 paragraphs about why I don't like this movie, but then realized how lame that was and deleted them. So I'll just briefly say that if this review sounds like the kind of movie you want to see with Tony Jaa and the director of Accident and Motorway, than you will love it. If, like me, it is the opposite of what you want from this pairing, then you will probably hate it.