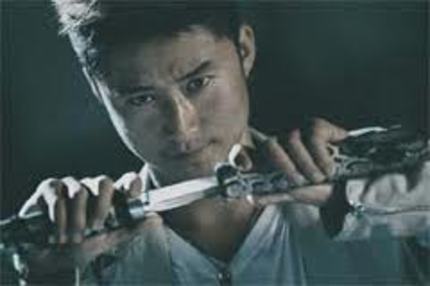 At the time of release "Sha Po Lang (SPL)" was the most hyped film here at ScreenAnarchy, and for a good reason. It marked the return of serious kick-ass action to Hong Kong cinema and proved to be a major come-back for its star Donnie Yen.

By the time I finally saw the film I was puzzled by all the accolades as I thought the story left something to be desired while the characters often devolved into caricature stereotypes. Frankly I enjoyed "Infernal Affairs" a lot more.

But, and that's a MAJOR but, just when I started to fear "Sha Po Lang" wouldn't offer more than some decent craftsmanship and only some moments of brilliance, Donnie Yen gets truly unleashed. This leads to some of the most brutal and epic fights ever filmed, and the scene below is a good example.

Setting the scene: Donnie's character is hurrying somewhere to save someone, but in an alley he is stopped by the bad-guy's most formidable henchman: a blond punk who has had cameos throughout the movie, killing policemen left and right, seemingly invincible with a knife. That's him in the picture above, and he's played by Jing Wu which means trouble. Thankfully Donnie's character happens to have a baton on him...

So what happens when two invincible fighters meet for a fight to the death, and neither the scriptwriter nor the choreographer chickens out to facilitate a rematch?
A ScreenAnarchy Top Kill, that's what! Enjoy.

(Note: I know this video is "squished" a bit, but trust me, you'll stop noticing within a minute...)
Tweet Post Submit