Rotterdam 2016: What The Audiences Liked Best

Last weekend saw the end of this year's International Film Festival Rotterdam, and all prizes were awarded. And while critic prizes are interesting (though often unfathomable), my favorite prize is always the Audience Award. Which films were appreciated the most by the paying public? The ticket price was 11 Euro a film this year, and us Dutch have a reputation for being mean and mean-spirited, so rest assured people were grumbling about the festival's cost and wanted to get their money's worth.

So how did the festival perform this year on the movie appreciation front? Well, pretty damn fine, actually. Check this out... 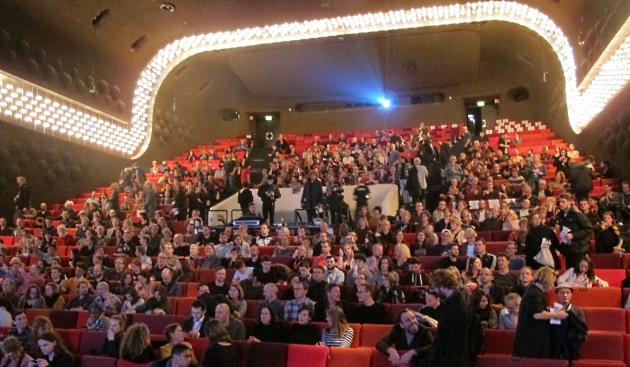 Here we see the Old Luxor theater, one of the many venues used for the International Film Festival Rotterdam for its audience screenings, where films get rated by the paying public.

This is how rating works: upon entering the venue, audience members are given cards with the numbers one (bad) to five (very good) on them. When leaving the venue, all you need to do is pull a small tear in the card at the rating you want to give. These cards are collected at the exit, counted, and the average ratings appear in the festival's website.

Films were generally high rated this edition. Out of the 250 films, a whopping 135 got rated 3.5 or higher. Any film ending up with a rating of 4 (out of 5) can be safely seen as a general crowdpleaser, and there were 63 of those. There will always be people who hate a film and give it a "1", so you can imagine how many "5" voters you need to pull the average to the level of 4. For the same reason, getting an average of 4.5 or higher is pretty amazing, when you think about it. But this year, the entire top-10 is in that league!

So click on the edge of the picture to start browsing the list, and get an idea of what the Rotterdam audiences appreciated most this year. 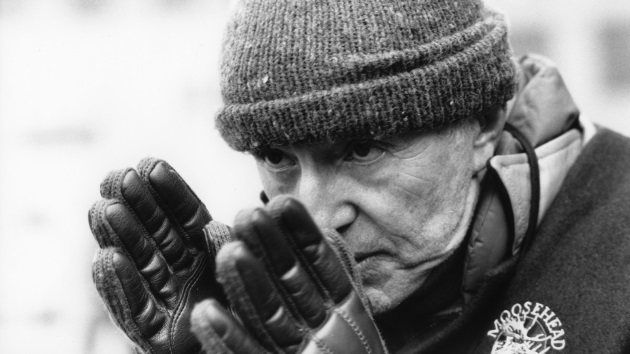 Documentaries are well-represented in this top 20: there are six of them, four of which are about movies. This is the first in this list: a portrait by Pamela Yates of the great cinematographer (and recently deceased) Haskell Wexler, who was praised for his work but deeply mistrusted in Hollywood for his leftist sympathies. 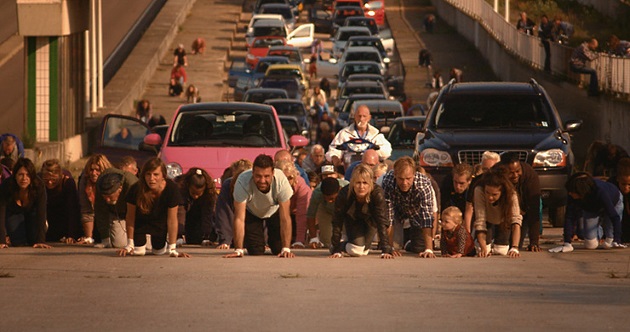 Some time ago, the performing artists of the group Wunderbaum started a project called "The New Forest", which shows attempts to make the world a better place. This film is the project's grand finale: it documents the last assignment, in which all the actors needed to "stop acting" and "start DOING something". Mijke de Jong's film slides in and out of documentary and fictional drama as it shows the Wunderbaum members engage in different activities. One starts helping families in need, another one opens a bar, a couple try to raise the perfect child... anything for a better future.

This year the festival had a section dedicated to television series, and while Suburra is a film, it's being adapted into a series as we speak, and was directed by Stefano Sollima, who made the Gomorra television series. Similarly, Suburra is a thriller which shows the flashy yet shady dealings between politicians, building firms and the Italian organized crime. 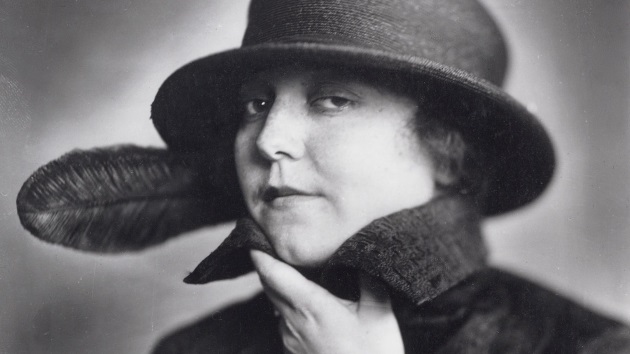 Fien de la Mar was the greatest star-actress in the Netherlands prior to the second World War, and Annette Apon's film (the title of which translates to "I want to be happy") is a portrait of Fien's career, based on interviews and rare archive clips. 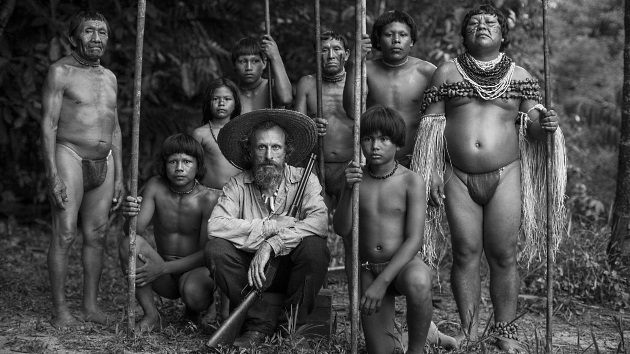 Ciro Guerra's film about the culture-clash between Colombian natives and European explorers has won several awards already, and the Rotterdam public loved it as well. And yes, that's Jan "Borgman" Bijvoet in the middle of that picture. 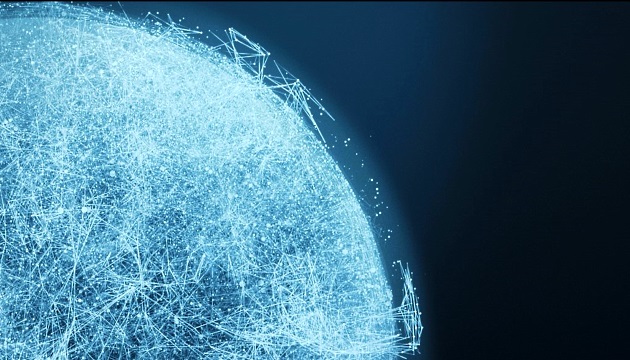 This is a documentary by Austrian director Friedrich Moser about whistle-blower Bill Binney, a meta-information expert who was one of the people responsible for the data gathering programs in the NSA. He tells the baffling story about how the NSA had developed a perfect system in-house, one which was later proven to have detected the 9/11 World Trade Center attack in time to prevent it. But that program was ignored, suspended, and later even disbanded, because its required budget was too low. It was so cheap, in fact, that the NSA would have received less money from congress in future years instead of more, so it was deemed undesirable. Bill Binney was a guest of the festival this year and received standing ovations at the screenings he attended. 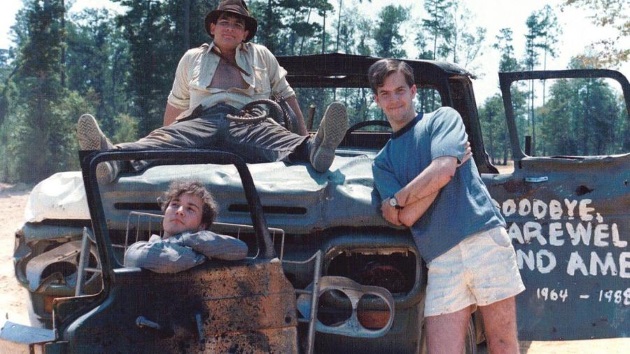 Remember those boys who remade Raiders of the Lost Ark, shot by shot, using household materials and loads of ingenuity? This is a documentary about them and about their film, and it is a blast. 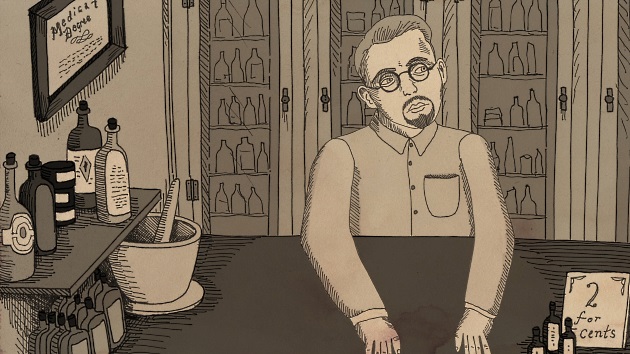 Penny Lane's animated documentary NUTS! details different stages in the life and career of John Brinkley, a hugely successful physician who, in the first half of the twentieth century, claimed to be able to cure impotency by transplanting bits of billy-goat testicles. Yep. And because so many believed it worked, he became a national celebrity. 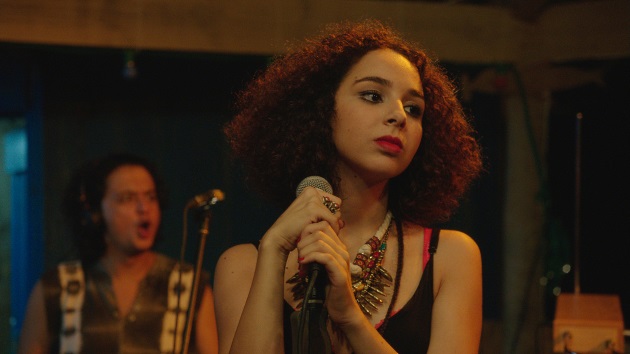 Leyla Bouzid's debut film tells the story of 18-year-old Farah in Tunesia, whose mother wants her to study. Instead, Farah sings rebellious songs in a band and develops an interest in boyfriends. When Farah disappears, her mother starts to investigate what happened to her. 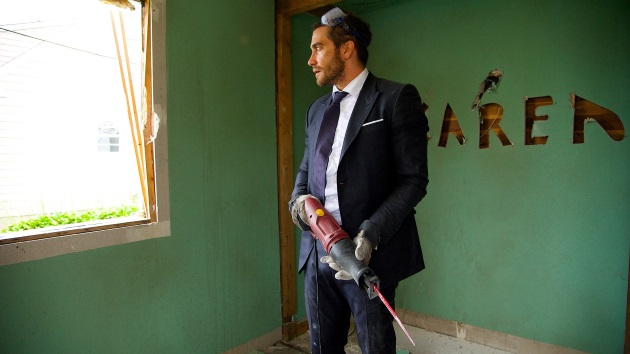 In Jean-Marc Vallée's new film, Jake Gyllenhaal plays a New York banker who sees his life deteriorate after his wife's death, and finds solace in wrecking things, and a new romance.

Jason Gorber says in his review: "Demolition knocked me out, a far cry from the manipulative and saccharine storyline that it at first appears to be. Artistic and accessible, it's another bravado performance by Jake G, a sterling film by Vallée, and an all around impressive look into grieving from a very different and occasionally difficult perspective." 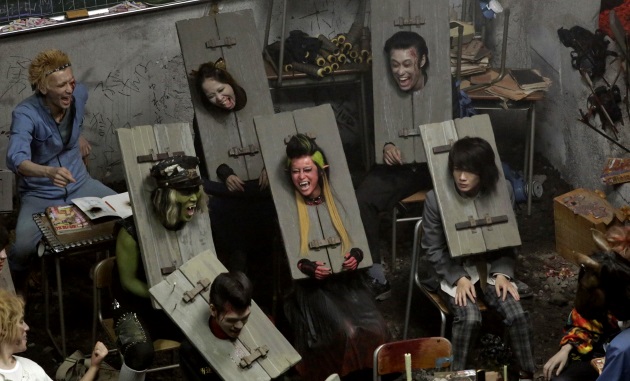 Kudô Kankurô's newest film is an exuberant comedy about a student who accidentally ends up in Buddhist hell, and joins a demonic rock band to escape it. In my review I called it "more heartfelt and a lot more clever than you'd think at first. Those expecting just a few lewd and gory jokes followed by a happy ending will be surprised." 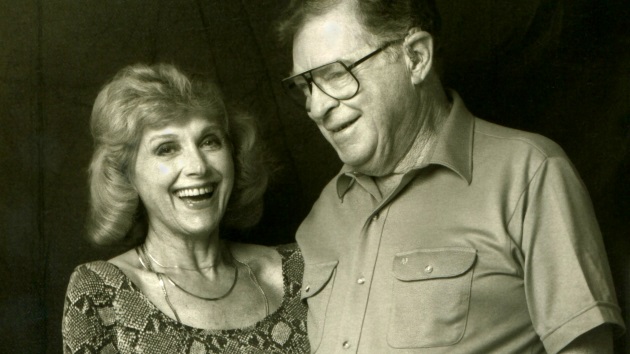 A documentary about Harold and Lillian Michigan, husband and wife for over sixty years, who up to their pension in 2010 were responsible for the look of many a classic film. She was a researcher, he was a storyboard artist, together they formed a powerful combination and worked for many famous directors, like Alfred Hitchcock. 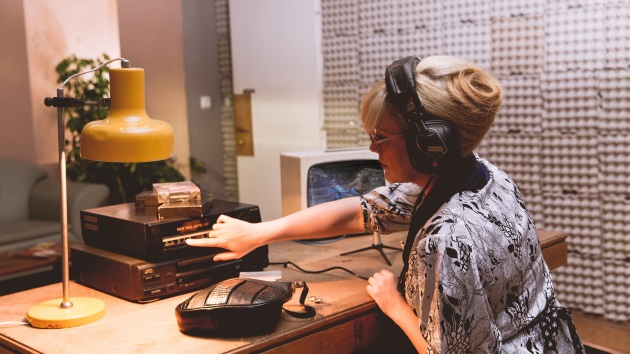 Before the fall of Ceausescu, Romania in the eighties was a totalitarian locked state, where people were not allowed to see decadent Western entertainment. This led to an underground scene where people would secretly meet in groups and watch action films. This documentary is about Irina Nistor, a woman who illegally voiced Romanian dubs for over 5000 action films, earning her the nickname "the voice of the revolution". 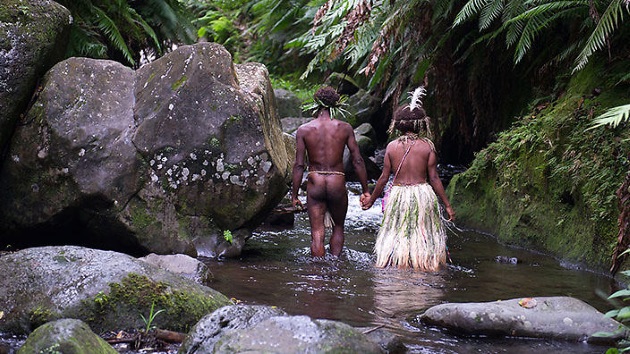 Regular documentary makers Bentley Dean and Martin Butler spent seven months on the island of Tanna to film their first narrative film, based on a real-life Romeo and Juliet story which took place there in 1987. Played by locals and featuring the gobsmackingly beautiful backdrop of rainforests and volcanoes, this film brings pretty pictures by the dozens. 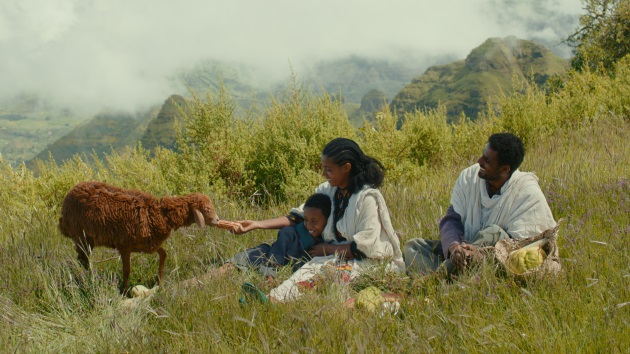 In Yared Zeleke's Lamb, an Ethiopian boy hears that his best friend, a sheep, is about to be sacrificed for a ritual, and he starts to do everything in his means to prevent that from happening. This was a big hit in Cannes last year, and audiences in Rotterdam loved it as well. 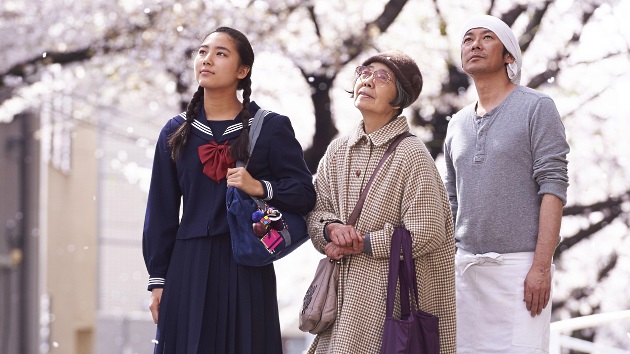 Director Kawase Naomi is a regular in Rotterdam, and even participated in the Tiger Awards at the start of her career. Her newest film is about a grumpy guy selling snacks at a stand, but when he hires an old woman to help him, she teaches him how to make better snacks, and how to see beauty when it surrounds him. And apparently the film is a lot less saccharine than that sounds. 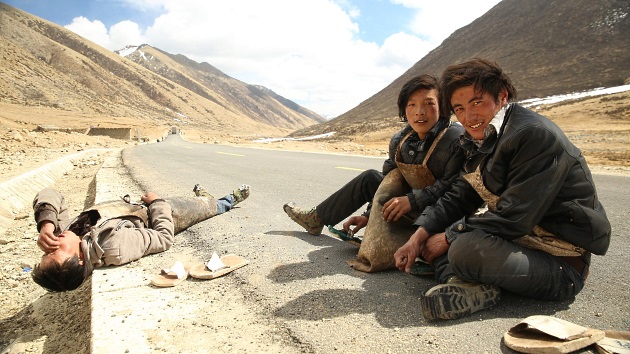 In Zhang Yang's new film, a group of people from a small Tibetan village starts on a holy pilgrimage to Lhasa and the Holy Mountain. And that pilgrimage is a sight to behold indeed. In my review, I said: "The whole procedure is so bizarre, grueling and time-consuming, that you cannot help but stare at it in disbelief. And whenever your eyes do wander away, there is the stunning landscape of the Himalayas to look at." 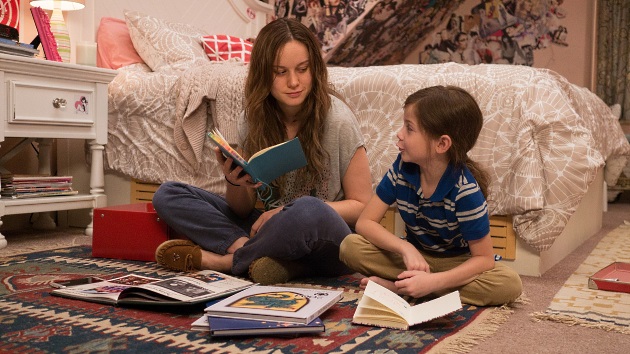 This is probably the most famous film in this list, a thriller about a boy and his mother who live in a single small room and try to make the best of it, at least until the boy gets curious. Jason Gorber said this about it in his review: "Room is a delight, a film both thoughtful and moving, with at times an astonishing capacity to get under one's skin. It's a thrilling thriller and a weep-worthy character piece, all wrapped into one, and all the better for its ambition and its execution." 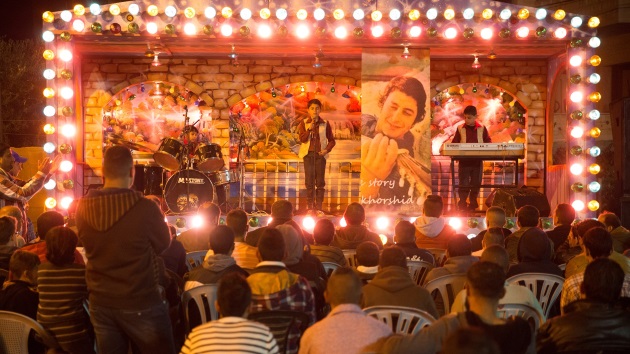 In Hany Abu-Assad's new film, a Palestinian boy manages to reach the finale of the Arabian edition of the famous talent show "Idols", and becomes an international sensation, and a beacon for the Palestinians, who are happy for being in the news in a positive light for once.

This film was basically the biggest buzz of the festival. Everyone was talking about it, but in the end it was passed in the ratings by... 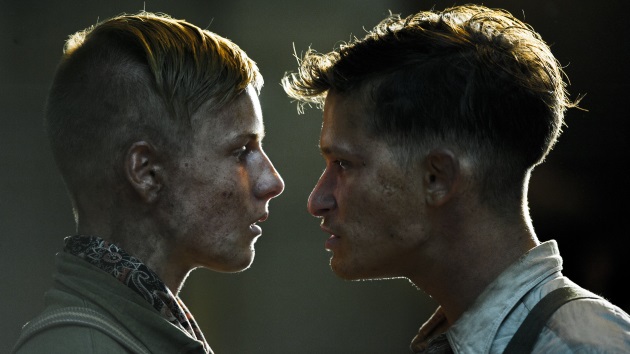 Martin Zandvliet's Land of Mine tells of a shameful forgotten episode in Danish history, when after World War Two the Danish army forced German prisoners of war to remove all the mines on the Danish beaches. In violation of the Geneva conventions, the often untrained and very young soldiers (some of them children) suffered heavy casualties in the daily grind. In the film, you see a harsh Danish sergeant forcing his prisoners to the limit, though his own conscience keeps eating away at him. Bleak and harrowing, and often shocking, this film won the highest rating of the festival.