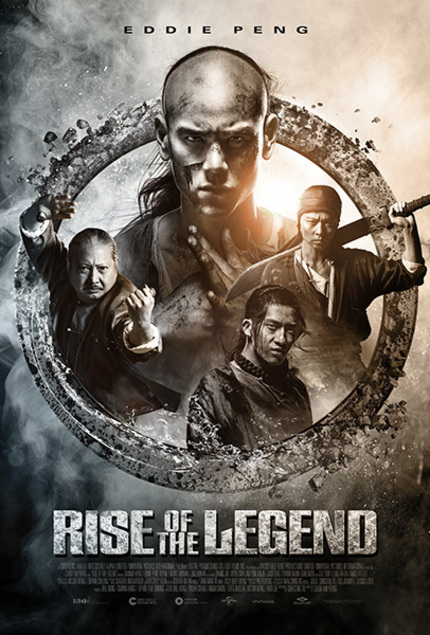 Asian film distribution heroes Well Go USA are at it again! This coming weekend they've got yet another martial arts film hitting theaters acros the USA, and this time it brings the return of Chinese hero Wong Fei Hung.

Rise of the Legend is a martial arts revenge film starring Eddie Peng as the legendary folk hero Wong Fei Hung. Wong's character has transformed over the last century from humble doctor who happens to have mastered the martial arts, to full on kung fu vigilante, though even his name is still enough to draw audiences. Well Go Usa describes his latest adventures this way:

A martial artist with extraordinary power (Eddie Peng) returns to the town where his father was murdered to face off against a ruthless crime boss (Sammo Hung) and bring justice back to the people.

Simple, and to the point. The film features not only Eddie Peng (Tai Chi Zero, Tai Chi Hero), but also Sammo Hung and Angelababy in supporting roles and action choreography from Seven LIttle Fortunes prodigy Corey Yuen. We didn't review it at the time of its original release in 2014, but James Marsh listed the film among his favorite Asian films of that year, saying:

Rise Of The Legend is more than strong enough to launch a new series of Wong Fei Hung adventures.

Decide for yourself with this clip from Rise of the Legend. The film hits US theaters Friday, March 11, check theater locations at the link below.

Do you feel this content is inappropriate or infringes upon your rights? Click here to report it, or see our DMCA policy.
AngelababyEddie PengSammo HungWell Go USAWong Fei Hung