J Hurtado
Editor, U.S. ; Dallas, Texas (@HatefulJosh)
Tweet Post Submit
Third Window Films continues its hot streak with a pair of recent releases that any fan of East Asian cinema should have on their radar.
First up is Khavn's Phillippine pantomime noir musical Ruined Heart: Another Love Story Between a Criminal and a Whore, one of 2015's most unusual and successful experimental films, then, this week sees the release of Third Window's first Kitano Takeshi Blu-ray, his remarkable masterpiece Hana-Bi. We've looked at both releases, and can tell you that they are worth your time and money (and purchasing a Region B capable player if you don't already own one and live outside of the EU/AUS).


Niels Matthijs contributed to this story. 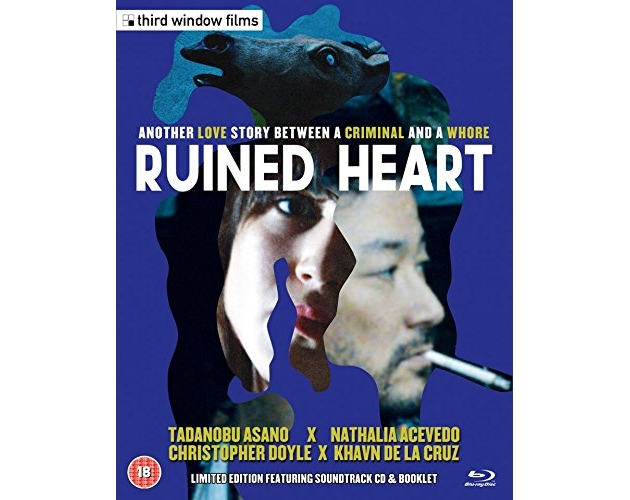 I was fortunate enough to be able to review Ruined Heart at Fantastic Fest 2015 and I loved it then, here is an excerpt from that piece:

As suggested by its long subtitle, Ruined Heart is another attempt at telling a familiar story. The Criminal is tasked with protecting The Godfather's favorite girl, and in the process The Criminal and The Whore fall in love. The Godfather doesn't like this and soon after, the star-crossed lovers are on the lam.

While many dozens of films and stories have been made from these well worn bones, Khavn manages to use his unique perspective to make Ruined Heart unlike any of those. With the help of superstar cinematographer Christopher Doyle and French-German electronic lo-fi duo Stereo Total, the film takes on an otherworldly feeling that removes the viewer from the very real surroundings and places them in a world completely of Khavn's creation.

The lack of dialogue creates both unique challenges and opportunities for reward for Khavn and the cast and crew of Ruined Heart. Asano's trademark slacker persona works extremely well in the role of The Criminal. His ability to emote from a place of almost complete silence is remarkable. Far from his bombastic and flamboyant performance in Ichi the Killer, Asano's Criminal is a heartsick ne'er do well looking to protect the only thing he really cares about. Nathalia Acevedo's Whore creates a perfect counterpoint with her emotive, effusive, and electric performance. The two portray perfect Yin and Yang in the process of creating this world in which nothing matters but them, and for which every experience brings deeper passion for themselves and the world they inhabit.

I would be crazy, though, if I didn't explicitly address the more formal aspects and technical brilliance of Ruined Heart. Khavn was fortunate to collaborate with his Mondomanila producers REM Films out of Germany on this feature, and as such connects with their previous collaborators in Doyle and Stereo Total. That pair also worked on REM's previous Pink musical, Underwater Love, a film that landed on my top ten back in 2011. However, where Underwater Love was an emotionally dense lo-fi softcore porn film, Ruined Heart requires more than a little additional finesse, and Doyle and Stereo Total definitely bring their "A" game.

After rewatching the film on Blu-ray, I stand by those words, and having been a bit more prepared for the experience definitely enhanced my appreciation for the work put in by everyone involved. Definitely one of the most interesting films of 2015.

A little behind the scenes info here, when I watched Ruined Heart to review it for Fantastic Fest it was an online screener that was not quite finished. Some color grading still had to be done and the film was quite low-res. Revisiting the film in its finished form on Third WIndow's Blu-ray is nothing short of a revelation in terms of the visual beauty of the film.

Doyle's cinematography was propulsive and energetic as hell in the version I saw, but seeing it again in high definition with the color grading applied, its impact is even more astounding. The disc, which comes straight from a digital source, makes kinetic use of all kinds of cameras and lighting setups and the combination of methods, from Bava-esque beams of color to handheld Go-Pro third person antics, means that there's never a dull moment. Third WIndow's Blu-ray handles this all exceptionally well, and I frequently found myself mesmerized by the image independent of the action taking place on the screen.

As Ruined Heart is a musical, the audio is an equally crucial element and this gets a more than fair treatment as well. There's very little dialogue in the film, and what dialogue exists is more incidental to the action, rather than a direct cause for it, and the audio track handles that well, allowing the dialogue to fade into the mix. The music, however, bursts from the speakers with wonderful clarity.

In terms of extras, Third Window does not skimp, and since this appears to be an identical release to a (presumably) forthcoming German Blu-ray, everything is dually subtitled. We get three music videos, including my favorite featuring Khavn performing the theme tune as well as one from Stereo Total. Also included is an alternate audio track featuring a live score performed by Stereo Total at Nippon Connection in Germany. The original short film upon which the feature is loosely based also makes an appearance and outlines the feel that Khavn was interested in expressing and how well it was translated from 14 minutes to an hour and just how well Doyle was able to adapt Khavn's visual style to his own. Finally we get a pair of commentary free featurettes, "This is not a premiere" and "This is not behind the scenes", which show a little bit of each of those events in spite of the titles.

Third Window deserves kudos for releasing Ruined Heart in this limited edition (1,000 copies) Blu-ray set. This film is not for the lazy casual viewer, and even seasoned art film vets may not quite appreciate the product, but I love it. The inclusion of a soundtrack CD with the disc, as with their release of Underwater Love, is the icing on an already delicious and complex cake. Highly recommended.

Ruined Heart is available in the UK on Region B locked Blu-ray. 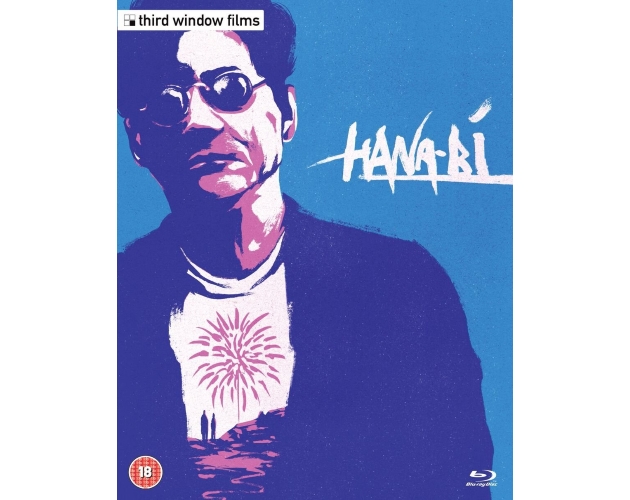 Hana-Bi is one of Kitano's best loved films, and as such I wasn't surprised to find a review already in our archive from Niels Matthijs. Niels's words work for my own feelings, so I figured it was best to let them speak for the film:

If you haven't seen any Takeshi Kitano (Kikujiro no Natsu, Achilles to Kame, Kantoku: Banzai!) films yet, Hana-bi is probably one of the best starting points in the man's oeuvre. It's one of his more accessible films, but it still goes a long way in highlighting his various skills. While still very unique and different from Western cinema, there are enough elements to pull in people not quite familiar with Asian film making.

Back in 1997 Hana-bi earned Kitano a Golden Lion (Venice International Film Festival). Even though he needed the help of Shinya Tsukamoto to convince the jury of Hana-bi's qualities, the film went on to become Kitano's big break-through in the West. A break-through that was already imminent when he released Sonatine a couple years earlier, but apparently an internationally respected prize goes a long way when it comes to Western interest. Hana-bi stands at the source of the renaissance that Japanese film making experienced around the turn of the millennium and in that way it is definitely one of the most important Japanese films made in the past 20 years or so.

Kitano takes center stage in Hana-bi. Not only in front of the camera, but with just about every aspect of the film. As an actor he is irreplaceable, as an editor he gives Hana-bi a unique rhythm, as a comedian he inserts some genuinely funny jokes and as a director he keeps a perfect balance between the different tones that are present. And if that wasn't enough, Kitano litters the film with his own paintings. They may not be sprawling examples of technical mastership, but they are certainly unique and amusing.

Hana-bi is a real delight. It's a simple, accessible film but with enough unique elements to keep you surprised and interested. The film is also the perfect showcase for Kitano's versatility. It's funny, poetic, violent and leaves you with a perfect dramatic punch in the gut. If you're new to Asian cinema, Hana-bi is definitely a good starting point. If, on the other hand, you're a seasoned fan already, I cannot imagine you haven't seen this film yet. If not, be sure to make it a priority.

Upon revisiting the film for myself, I was struck at the beauty of it, especially this new 2K restoration. Kitano's touch is familiar at this point in his career, but back in 1997 it was revelatory, even after several features. Hana-bi remains one of his masterpieces and well worth discovery or revisiting.

Hana-bi comes to UK Blu-ray from an Office Kitano restoration that had already appeared on Blu-ray in Japan but sadly without subtitles. This new release is the first worldwide offering of the film on Blu with English subs and it definitely holds up and warrants the upgrade from DVD.

The image on the disc immediately startled me with its clarity and rich color palette. I'm so used to seeing these films on their half-assed, muddy US DVD releases from various distributors over the years that I'd never suspected it could look this good. While there is some variation in detail level from close-ups to daylight wide shots, it is never less than satisfying, and Kitano looks wonderful in his prime. With his own production company behind the restoration, it has the look and feel of a passion project, which is a good thing in this case.

The audio is also wonderful, with the dialogue coming through crisp and clear and a beautiful treatment of Joe Hisaishi's score particularly delightful to hear. The disc utilizes a DTS-HD 2.0 stereo track, so there's no attempt to spread the rather direct audio around to the other channels, which is good in this case, but it is really the score that benefits most.

We get several extras to go along with the film, both vintage and new, and they all add some level of additional context to the film that is welcome, considering its importance. First up is an audio commentary from Midnight Eye's (R.I.P.) Mark Schilling (it's the site that has sadly died, Schilling is still very much alive), which is wonderful and a fantastic addition to the recent commentaries from Third Window and fellow Midnight Eye alum Tom Mes. Also included are a pair of vintage featurettes from the time of the film's release. First up is a great interview with Kitano in which he describes the challenges he faces in his home market after decades of recognition as a comedian, as well as how he defines the differences between his personas as performer and auteur. Second is a general overview of his work leading up to Hana-bi as well as behind-the-scenes/making of material from the film. Both are sourced from inferior (read: non-HD) materials, so moderate your expectations in terms of the visual quality, but they are packed with wonderful insights about the artist and his work. Third Window rounds out the package with their newly cut UK trailer.

No mincing words, no caveats necessary: Buy this disc. If you've never seen the film, buy this disc. If you don't have a region free Blu-ray player and you live outside of Region B, buy a player then BUY THIS DISC. I cannot stress enough how wonderful this film and presentation are. Thanks to Third Window!