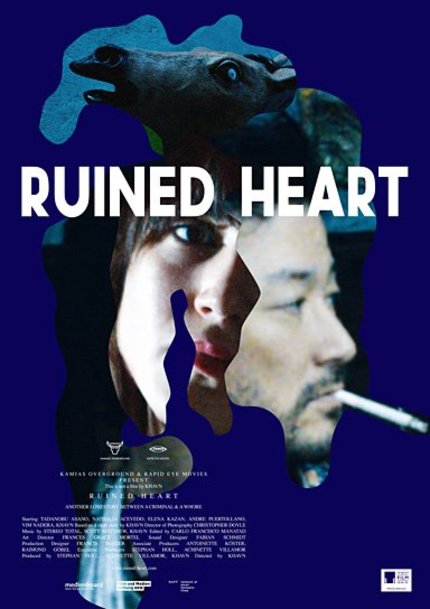 Filipino director Khavn De La Cruz burst onto the radar of avant garde film lovers around the world with his 2010 feature Mondomanila. While far from a debutante with dozens of shorts and features behind him, Khavn's film made an impression, especially on our Kurt Halfyard, who remarked that the film was "gutter poetry at its finest," and "not to be missed."
Unfortunately, the film kind of disappeared, so far with only a DVD release in Germany to remind people around the world that Khavn still exists. However, with his latest feature, Ruined Heart, Khavn stands up to be counted, and as long as you can groove to his beat, it's quite a ride.

Ruined Heart (subtitled, "Another Love Story Between a Criminal and a Whore") treads familiar ground without feeling repetitive. It's a film that bursts with emotion, even though it is nearly wordless. It follows a brief episode in the lives of the titular Criminal, played by Japanese indie darling Asano Tadanobu, and the Whore, portrayed by Post Tenebras Lux star Nathalia Acevedo. as they fall in love, find themselves in trouble, and make a run for it. The film has almost no dialogue, and plot details are deliberately vague, so its construction can certainly leave less active viewers scratching their heads. For those willing to submit to the experience, however, the rewards are many.

As suggested by its long subtitle, Ruined Heart is another attempt at telling a familiar story. The Criminal is tasked with protecting The Godfather's favorite girl, and in the process The Criminal and The Whore fall in love. The Godfather doesn't like this and soon after, the star-crossed lovers are on the lam.
While many dozens of films and stories have been made from these well worn bones, Khavn manages to use his unique perspective to make Ruined Heart unlike any of those. With the help of superstar cinematographer Christopher Doyle and French-German electronic lo-fi duo Stereo Total, the film takes on an otherworldly feeling that removes the viewer from the very real surroundings and places them in a world completely of Khavn's creation.

The lack of dialogue creates both unique challenges and opportunities for reward for Khavn and the cast and crew of Ruined Heart. Asano's trademark slacker persona works extremely well in the role of The Criminal. His ability to emote from a place of almost complete silence is remarkable. Far from his bombastic and flamboyant performance in Ichi the Killer, Asano's Criminal is a heartsick ne'er do well looking to protect the only thing he really cares about. Nathalia Acevedo's Whore creates a perfect counterpoint with her emotive, effusive, and electric performance. The two portray perfect Yin and Yang in the process of creating this world in which nothing matters but them, and for which every experience brings deeper passion for themselves and the world they inhabit.

I would be crazy, though, if I didn't explicitly address the more formal aspects and technical brilliance of Ruined Heart. Khavn was fortunate to collaborate with his Mondomanila producers REM Films out of Germany on this feature, and as such connects with their previous collaborators in Doyle and Stereo Total. That pair also worked on REM's previous Pink musical, Underwater Love, a film that landed on my top ten back in 2011. However, where Underwater Love was an emotionally dense lo-fi softcore porn film, Ruined Heart requires more than a little additional finesse, and Doyle and Stereo Total definitely bring their "A" game.

The world has become familiar with Doyle's signature work with Hong Kong auteur Wong Kar Wai, Ruined Heart presents him with opportunities to create images beyond his usual scope. Fans of films like Chungking Express are accustomed to Doyle's visual flights of fancy, however, this film is on a whole other level. I don't have the technical details at hand, but the look is that of a thousand Go Pro cameras placed everywhere, and even long stretches with Asano holding a camera in his own outstretched hands. So the look of Ruined Heart is wild and free. While it's definitely sure to give some people headaches, I definitely found this experimentation exciting and quite fitting with the overall tone.

Similarly tangential to what we might expect from this kind of film is the score. While the complete score is the work of many artists in concert with the occasional diegetic interlude, it is definitely Stereo Total whose work steals the show. The duo's work on Underwater Love was exceptional, and this follow-up is possibly even better.
If the cinematography propels the film forward, the music of Ruined Heart does an amazing job of displacing the viewer from the image. I don't know if the streets of Manila typically throb with the beat of a two piece electronic band, but in its juxtaposition with the familiar streets and visual language of poverty, the music allows the viewer to contextualize the story as a universal one. That's not even to mention the remarkably apropos outbursts of onscreen music from such disparate sources as Ska legend John Holt and backwoods rockabilly pioneer Hasil Adkins. Khavn's ability to blend these pieces at all speaks to a monumental talent.

If there's a descriptor that bothers me more than any other when reading film criticism, it's "tone poem." This seems to be the default for many out there when other descriptions fail. Films that don't rely on standard linear narrative are often referred to as tone poems, simply due to the difficulty difficult in pinning down the actual meaning behind the mood.
I fear that Ruined Heart will fall subject to this description more often than it deserves. The film is fresh, explosive, and new, and at this point, more than a hundred years after the invention of the medium, the fact that anyone can come up something new deserves as much attention as possible.
Tweet Post Submit

Do you feel this content is inappropriate or infringes upon your rights? Click here to report it, or see our DMCA policy.
Asano TadanobuChristopher DoyleFantastic FestGermanyKhavyn De La CruzPhilippines