Destroy All Monsters: Consent And The Superhero In MARVEL'S JESSICA JONES 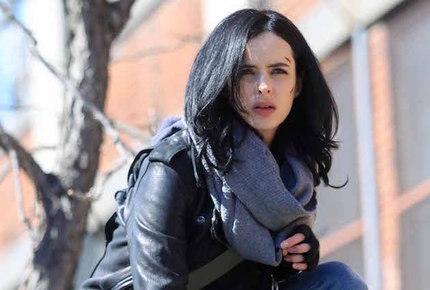 If the Marvel Netflix properties this year have demonstrated anything, it's that the movie series' perceived lack of bench-strength in the villain department might not be a matter of character, but rather of format.

People like to pick on Lee Pace's Ronan the Accuser in situations like this, but I'll continue to hold up Christopher Eccleston's formless Malekith the Accursed as the ultimate example of how completely you can screw up a bad guy in a two-hour movie about a fellow who swings a hammer. Bad guys in the Marvel movies have sucked more often than not -- and give or take a Loki, they're almost never a highlight of these stories in the first place.

When Daredevil made brilliant use of Vincent D'Onofrio's richly layered performance as the Kingpin earlier this year, it was no great surprise. The Kingpin's a great character, and connecting him to the right actor through some great scripts inevitably leads to terrific drama.

But as of last week, Marvel pulled off the Purple Man, so now, all bets are off.

The Purple Man is the sort of gadzooks-ludicrous supervillain that one can scarcely imagine turning up in a Marvel feature film. Even if he did, he'd probably be about as effective as Malekith: an insane superpowered individual whose sole motivating factor seems to be ruining everything for everyone until a superhero steps up to make him not do that any more.

But in Jessica Jones' measured, precise storytelling across 13 episodes (taking a page from Daredevil's book by not fully unveiling the character until several episodes have passed), the Purple Man (okay, Killgrave), as played by David Tennant, steps up to become one of the Marvel Cinematic Universe's most memorable, and effective, villains so far.

It is, of course, notable that Marvel's first property built around a female lead (beating Captain Marvel to our eyeballs by a disappointing three and a half years) immediately positions Jessica against a villain whose particular crime is sexual violence against women (along with murder, theft, kidnapping, home invasion, and being a general piece of shit).

Depending on your point of view, the decision to tell the Purple Man story as its introduction to Jessica's world is either Jessica Jones' strongest textual asset or greatest structural flaw. Following Black Widow's forced sterilization, the MCU is quickly becoming populated by women who are survivors of intense sexual violence.

In Jessica Jones' case, though, I am calling it an upside. Jessica is the first Marvel character since Tony Stark rolled out of bed in the first ten minutes of Iron Man 1 who is allowed to have a fully functioning, agented sex life, which she enjoys on her own terms. She criticizes (nay, openly mocks) the aggressive sexualization of female comic book heroes in skin-tight clothing, along with their "porn star names." She is motivated neither by a need for vengeance (per most female-lead rape/revenge stories) nor by a desire to prove herself to an absent parent figure (per what seems like every male-centered comic book ever made).

Nope. She wants to stop Killgrave for the reason most of us want him to be stopped: because he is wholly, undeniably awful.

Seriously. Killgrave, as presented on Jessica Jones (sans purple makeup, thank goodness, save for a brief nod in the finale), is a hyperextension of the kinds of "what if?" scenarios schoolchildren play with regards to comic book characters.

Well really: what if a man could control womens' minds? The answer Jessica Jones supplies isn't pretty, and before anyone jumps in with a #NotAllMen, we should take a more considered look at how Jessica Jones uses the character, and sets him against Jessica herself.

Killgrave is too hyperbolic a character to function particularly well as a metaphor in anything other than the extreme. He's an equal-opportunity abuser and sociopath. He's certainly a misogynist, and a diabolically glib antagonist for Jessica, in both intentions and personality.

What I admire about the show, though, is how it uses the extremity of Killgrave's ability - he can control the minds of anyone he comes in contact with through verbal suggestion, persuading them to do anything from hand him their fancy coat to throw themselves off a building, or endure half a year of nightly rape - to repeatedly address issues of consent and, by extension, victim blaming.

Due to Killgrave's power set, there can be no question within the storytelling of Jessica Jones about whether his victims are consenting to his abuse. His depredations are so exaggerated, and so repeatedly emphasized as such, that the show creates inviolate certainty that none of Killgrave's victims ever wanted to do any of the things he made them do.

And yet - and here is the key - several of them blame themselves anyway. And the society around them (even, in a handful of cases, other victims!) blame them too.

It's Jessica Jones' most chilling insight, and the series gives it a full workout over the course of its 13 episodes. Even Jessica herself must, gravely and with great effort, learn to shrug off her inwardly-held belief that she is responsible for the crimes she committed while under Killgrave's influence; along with all the attendant loss of self-worth that having survived those atrocities has instilled (or enhanced) in her.

So too must the community of Killgrave survivors who grow up around Jessica (whether she likes it or not); so must the wider community around Jessica - institutions like the police force and the media, and personal relationships like the doting boyfriend and grudging employer. They all must learn the basic lesson that Jessica does, about exactly how much culpability the victims of violence hold in their own victimization: exactly none.

In Jessica's, and Jessica Jones', firm stance, there is no ambiguity about the moral relationships here. None of these people gave consent; none of them were even capable of giving consent. Shades of modern predators, from Cosby to Ghomeshi, abound. The message is always the same: the abuser, no matter how powerful, is responsible. And because this is a superhero story, the good guys get to win.