Review: CRIMSON PEAK, A Gothic Romance For The Ages 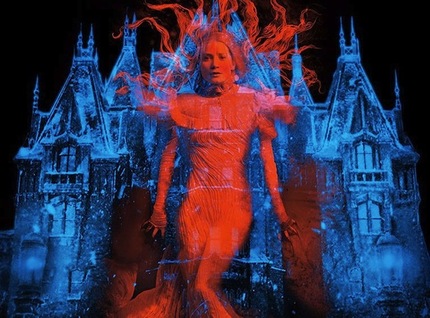 Delving into a Guillermo del Toro movie is like visiting a great museum.

Superficially there's all this pretty stuff going on, with images that often startle as much as they entertain. Dig a bit deeper and there's meaning to those flights of fancy, deeply researched and contemplated nods to works throughout history, drawn from fine art, literature and cinema in equal measure. Unlike the cinema brats that mashup hits gleaned from their days working video stores del Toro is a polyglot in his cultural mining.

Sometimes his films result in a collision of style that's not agreeable to wide audiences, particularly those with a far more narrow idea of what a movie of "this type" should be. Look at any trailer for Crimson Peak and you wouldn't be foolish for thinking of a haunted house film, or at least an all-out horror. Within the context of a Halloween release, with its somber look and creepy style (let alone all those ghosts!) you're going to get a bunch of Horror nerds going out and looking for blood.

Many of them are going to hate this movie.

There's lots of reasons for this, but this is the big one - this isn't a horror movie, it's (to use GDT's nomenclature) a Gothic Romance. Emphasise both those elements when thinking about Crimson Peak, for they're vital for the appreciation of the work. It means melodrama (the dude's Mexican, and, again in his words, melodrama is in their blood). It means moments of tenderness, affection, and downright kinkiness. It means the "shocks" aren't there to scare as much as to add dread to the spirit of lustfulness wisping through the hallways of the edifices, sinking into the blood-coloured sand up at Crimson Peak.

It's also not a ghost story - to quote the film, it's instead "a story about ghosts". It's a quieter film echoing works from a more redolent time, where the efficiencies of the age of reason were being subverted by those seeking some irrationality in their entertainment. The collision of love and death is at the heart of Crimson Peek, and for audiences of slasher horror, found footage spook fests and paranormal gore fests they're going to be out of luck.

It's easier to describe what Crimson Peak isn't to those with built-in genre expectations, but somewhat harder to describe what it is. In fact, I'm betting (as impossible as it would be to prove) that if this film was in the Spanish Language, where the "foreignness" and exoticism would somehow ameliorate some of the film's more florid elements for English-language audiences, that this work would be immediately lauded as a new classic. One need only look to Devil's Backbone, a film adored by the relatively few that have seen, in contrast, say, to the multitude that will have a chance to see this theatrically. Devil's is Criterion arthouse fare, Crimson is multiplex content, yet both draw from the same Gothic well, both from the fertile mind of del Toro, both in their own way not ghost stories but stories about ghosts.

So what is Crimson Peak? Nothing short of a grand vision by del Toro, a rich, sumptuous film with a dizzying number of ingredients all combining into a wonderful whole. For fans of del Toro you'll see plenty of echoes to earlier works, for fans of his beloved Hitchcock you'll find a tonality not dissimilar to Rebecca (a film that I've been recommending for months for people to watch in preparation, if only to get into the mood where death and romance collide). This is the first of del Toro's English language works that really feels of a part with Devil's Backbone and Pan's Labyrinth, threading that fine needle between the disparate elements and creating a new whole. The film is more Jayne Eyre with bite rather than Poltergeist with some mushy stuff rolled in, but if you embrace the mood, one that feels both archaic and highly inventive at the same time, you're in for an experience unlike any other in theatres in many years.

From a production standpoint the film is as extraordinary as you'd expect - the world of the 19th century is rendered with Kubrickian levels of specificity, with little gadgets and playthings adding to the sense of place and time. The film's central storyline involves a digger device and its clockwork mechanism reminds of Chronos, where the workings of machinery is intertwined deeply with the machinations of the heart.

Performance wise the leads do an admirable job in keeping things on track, playing with the right degree of solemnity and playfulness when called for. Tom Hiddleston is perfect, his electric smile inviting while his frayed but proper clothing belying his purported status, a fallen aristocrat trying to make his way back up on top. I'm usually not a big fan of Jessica Chastain but she does a mighty fine Mrs. Danvers in this work, providing a chilly exterior and a broiling inner rage. Charlie Hunnam is dashing as a doctor on a mission to save, while Deadwood's Jim Beaver is his usual gruff excellence as a new world industrialist.

This film rests primarily on the shoulders of its real protagonist Edith Cushing, played by Mia Wasikowska, and it's this inversion of the regular gender roles for films of the Gothic Romance that gives the film much of its joy. It's the way that Edith's journey evolves that sets the film apart from mere homage, and without giving too much away the film very much echoes other contemporary films that are taking action or horror tropes and dismissing the need for a damsel to be merely in distress.

Screened with Laser Projected IMAX the film truly astonishes, with the details of period Buffalo, NY through to the vaulted ceilings and womb-like caverns in the English countryside. One visually gets drawn into the long hallways and decaying walls, the edifice feeling very much like a thing decaying in the same way as the ghosts that inhabit those spaces. The bloody titular colour is used in very pleasing ways, including a particularly Freudian womb-like cellar where a significant altercation occurs.

So while Crimson Peak may not be for everyone, those amenable to its charms will be completely smitten. For audiences unafraid of a bit of ultraviolence mixed in with heightened romance, all wrapped up in a puzzlebox of exquisite design, they're in for a treat. For those bestowed with patience to let the film unfold, and are unfazed at needing to do a bit of work to truly understand the deep references and connections that del Toro is making with the work (ie., see Rebecca again!), they're in for one of the most unique and rewarding films of the year.