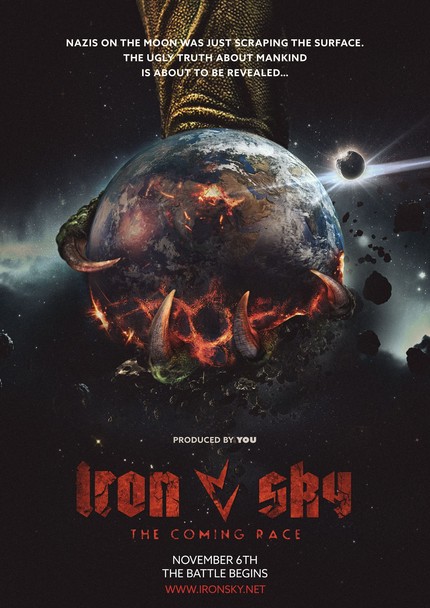 Well, here's something a little different. Scifi comedy Iron Sky: The Coming Race launches principal photography today and, after running into issues coordinating international release dates with the first Iron Sky, producers are opting to mobilize their massive international fan base for something I don't believe has ever been done before: They're selling tickets for international premiere events spanning the globe to try and force distributors' hands in coordinating a global day and date release.

Finnish-German-Belgian scifi-adventure epic Iron Sky the Coming Race begins filming today. And on this very same will begin the worldwide ticket sales of the movie. Fans of Iron Sky get a chance to show their support from the first laps of the production by purchasing a ticket to a premiere cinema event in their home town. This is completely unique in movie business.

If you want tickets to a concert or a theater show, you buy them weeks or even months in advance. But the movie business doesn't work like that. Tickets aren't available untill the film is showing in theaters. Finnish film production company Iron Sky Universe is here to change that.

"The first Iron Sky film showed the power of our global fanbase. Especially when indie films are concerned, the dates of premieres are spread over a long period of time because different distributors have different agendas. Now the demand from the audience will encourage distributors to time globally the release of our movie", producer Tero Kaukomaa explains.

Iron Sky the Coming Race premiere cinema events are more than just opening nights for the movie. They will give the fans a chance to build the premiere in their hometown into a unique happening. Iron Sky will guide the creative process of the community on our website and on social media.

Principal photography of Iron Sky the Coming begins on 19th October at AED Studios in Anwerp, Belgium. Two month shooting of the movie will feature Lara Rossi, Vladimir Burlakov, Kit Dale, Udo Kier, Julia Dietze and Tom Green in lead roles as well as over 200 fan extras from all over the world. Iron Sky the Coming Race is scheduled to premiere in movie theaters in autumn 2017.

This is an interesting concept, I think. With technology being what it is staggered releases around the world can be commercial death for a film, with nations farther down on the release calendar typically turning in large numbers to piracy to see the films they want to see, when they want to see them. That's not exactly news at this stage of the game, and yet that too often doesn't prevent regional distributors from engaging in muscle flexing and posturing when it comes to windowing release dates, creating a situation often destructive to producers. Will this work? No idea, but it's interesting to see someone try something different, at least.