Now On Blu-ray: A SNAKE OF JUNE Is Still A Masterpiece 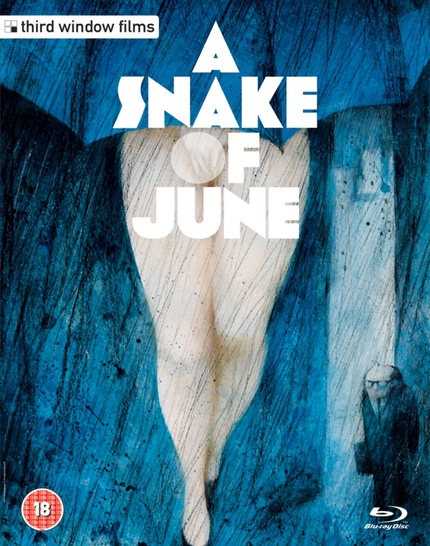 A bit of a spoiler alert up front, A Snake of June is my favorite Tsukamoto Shinya film. While I haven't seen all of them just yet, of the eight or so that I've managed to ingest, A Snake of June most matches what I want from my abstract cinema. I adore the first two Tetsuo films, I adore Marebito, I adore Tokyo Fist and Bullet Ballet, but A Snake of June scratches all the right places in my mind. For that reason alone, Third Window Films deserves kudos from me in their heroic work with the films of Japan's cyberpunk legend, Tsukamoto Shinya.

One of the things about being a writer at the world's greatest source for international film news is that often we find ourselves wanting to write pages upon pages of analysis on films that would be obscure in most corners of the web. However, because we are who we are, ScreenAnarchy actually has a formal review of A Snake of June from its DVD original release back in 2005, written by our fearless leader and Tsukamotophile, Todd Brown. In his critique of A Snake of June, he says:

What people miss with all the hype around Tetsuo, however, is Tsukamoto's growing desire, and ability, to wed his more surreal urges to living, breathing human characters, creating some stunning character studies in the process. He first got the mixture right with Bullet Ballet and, after a brief foray into commercial film making with Gemini, Tsukamoto returned to his distinctive vision with 2002's A Snake of June, a film that I truly believe stands as Tsukamoto's masterpiece.


It's hard to argue with that contemporaneous view of A Snake of June, a film that has maintained its status as one of Tsukamoto's finest films even with an extremely strong catalog to follow.

A Snake of June is a film about desire, a film about freedom, and a film about a modern Japan that remains staunchly in opposition to the expression of either of these very basic human urges. Tsukamoto's views on the subject are quite clear throughout his filmography, as from his very beginnings with Tetsuo: The Iron Man, he uses science fiction and cyberpunk fantasy to explore the communal repression of the Japanese id. Working out his own fantasies as well as the many portraits of a nation in denial about its protracted history of penance for crimes against humanity, Tsukamoto shows Japan through its people, struggling to be free while fighting against a worldview that punishes the individual and places incredible demands upon its citizens to work for the greater good.

Third Window's new presentation of the film is very cognizant of the exceptionally elaborate nature of A Snake of June and its multitudes of thematic elements as well as Tsukamoto's complete command of mise en scene. Not a frame is out of place, every element has a meaning and a purpose, and each action of each character is saturated with meaning. In fact, the film is so incredibly dense with subtext that multiple viewings are not only a good idea, they are essential to begin peeling back the layers.

The most essential feature of this disc is a scholarly commentary from Tom Mes, writer of Iron Man: The Cinema of Shinya Tsukamoto. Mes obviously has a firm grasp of what makes Tsukamoto tick, and his commentary is far more than a simple scene specific retelling of the events on screen. He picks A Snake of June apart and brings the audience into its world to help us understand each and every visual motif, music cue, and all manner of meaning that in some cases lays just beneath the surface. Mes's commentary is among the finest I've ever listened to, and nearly supplants the film's actual audio as my preferred viewing method. In fact, I'll probably listen to the commentary again before revisiting the film's original dialogue track again because, like the film, I'm sure I missed a few bits and pieces the first time.

Also present on the disc is a making-of documentary from 2002 in which Tsukamoto and his collaborating cast and crew talk about making the film in depth. It's a fascinating look into a fascinating film and it makes it easier to enjoy the film when you have Tsukamoto showing you a bit behind the curtains. There is also a 25 minute Q & A with Tsukamoto from 2015 that is exceptional in its own way. This is a filmmaker who is very deliberate about his work, and having the benefit of hindsight makes him all the more aware of his intentions than he may have been while still in the eye of the storm.

The film itself comes from a brand new HD transfer supervised by Tsukamoto himself, and the film has never looked better. It is nowhere near as pristine as more modern films, but there are many reasons for that. The film was shot in 16mm and blown up to 35mm for theatrical presentations and it is from that second generation that I believe this transfer was taken. As a result, there is some loss of detail, however, it still looks far better than the old DVD. One thing that is worth mentioning is that this new Blu-ray shows more of the original image than the previous cropped versions on DVD. As a result of the matte being opened up on all four sides there are some inherent issues with the outer edges. While we don't see the vignetting in the corners that often occurs with this kind of transfer, there are what appear to be cement marks at the bottom of the frame in every single edit of the film. At first it is quite distracting, and could be mistaken for a digital artifact, but upon closer inspection, it's definitely an organic flaw. For the first part of the film it was distracting, but as the film played out I noticed it less, though it never goes away. Something to be aware of. The audio, however, shows no defects and it works beautifully with the new transfer.

A Snake of June makes its world Blu-ray debut with Third Window's recent release and this is most definitely the essential edition at the moment. It will take quite an effort to unseat this disc from the throne. Highly recommended!

Do note that Third Window Films' Blu-ray release of A Snake of June is locked to Region B, so outside of the UK/Europe, you'll need special hardware to play the disc.

A Snake of June

Do you feel this content is inappropriate or infringes upon your rights? Click here to report it, or see our DMCA policy.
third window filmstsukamotoShin'ya TsukamotoAsuka KurosawaYûji KôtariYukino AsaiDramaMysteryThriller

More about A Snake of June