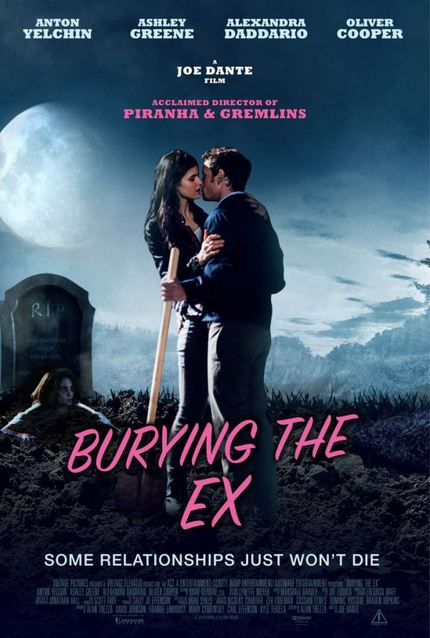 A triumphant return for a beloved master or a sleepy reworking of now overly familiar tropes in a zombie movement that just won't die? Joe Dante's Burying The Ex is neither, really, the horror comedy showing plenty to say that the director of Gremlins and The Howling still has plenty left in the tank while also being undercut by a script too willing to go for the obvious gag without doing the sort of heavy lifting that would get an audience to really buy in in the first place.

Anton Yelchin is Max, a meek horror shop clerk - think costumes, fake blood, etc - completely overpowered by his Ultra-A Type Personality girlfriend Evelyn (Ashley Greene). He's changed his diet for her. He's changed his transport for her. He's pressing his half brother, Travis (Oliver Cooper) to stop using his place as a fuck pad for her - though, admittedly, that one might be a good thing. And for her part? Well, Evelyn seems to care - she says she cares - and the sex is great, but she just doesn't seem to have any real understanding of what makes Max tick or any desire to find out. And she's more than a little bit domineering, dismissive, and prone to lashing out when anyone or anything catches Max's eye for any reason, such as attractive ice cream shop owner Olivia (Alexandra Daddario), with whom Max shares a deep knowledge of retro breakfast cereal.

This all leads to one simple conclusion: Max needs to break up with Evelyn. But when he tries, well, a bus breaks her up instead. Instead of ending up dumped Evelyn ends up dead, but just when it seems like Max may move on to a happier ending with Olivia she comes back. Oh, Evelyn's still dead, she's just not leaving.

Working from a screenplay adapted from Alan Trezza from his own short film of the same name, Dante proves he's still got the chops and timing for some great comdey-horror sight gags and set pieces, easily shifting mood and tone throughout while delivering a handful of legitimate laugh out loud moments. There's some legitimately inspired lunacy in the visuals here but sadly the character work - normally a Dante strong point - isn't up to the same standards.

While familiarity is an issue for Burying The Ex - with such a glut of zombie material on the market these days there's almost nothing left that hasn't been done - the larger issue is one of likeability. In that other than Olivia - with Daddario stealing every scene she's in despite having very little to do other than be pretty and not crazy - there's not really anyone to like in this script. Evelyn boils down to a one note caricature - the manic shrew. Likewise Travis, as the wasting-his-life hedonist. And Max? Well, we're supposed to like him but we're not actually given any reason to beyond the fact that he likes old horror movies and his extreme failure to stand express himself in any way whatsoever rather than just letting Evelyn and Travis walk all over him ... well, he kind of deserves the situation he's in. There's no narrative tension in Max and Evelyn's relationship, no particular tragedy in Evelyn's death. That's down to the writing far more than Dante and in a case like this it requires actors to step above the call of duty and transcend the material, something only Daddario manages to do. And not liking the characters or feeling any investment or stakes in their relationships is a pretty major issue for what is ostensibly a date film.

You can make a pretty strong case that Burying The Ex is Dante's weakest feature film. That's because it very likely is (though I should say I've never seen Looney Tunes). But please don't mistake that for saying that the film is a disaster in the way that Ghosts Of Mars, say, was a disaster for John Carpenter - a sign that the magic is gone. Dante's got plenty of magic left, he's just also got such a ridiculously strong filmography that turning out something of a middling title feels like more of a stumble than it actually is. Onwards and upwards to the next one.

Do you feel this content is inappropriate or infringes upon your rights? Click here to report it, or see our DMCA policy.
alexandra daddarioanton yelchinashley greeneburying the exjoe dantereview