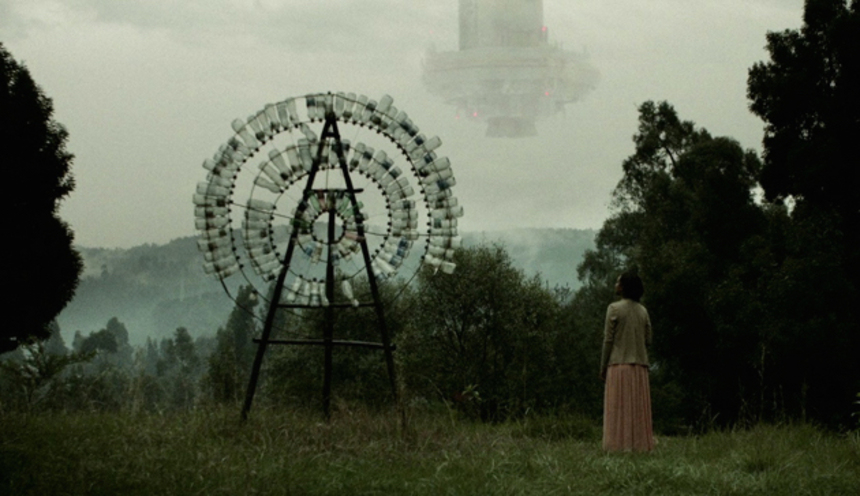 Ethiopian post-apocalypse dystopian fairy tale Crumbs has a decaying handsomeness to match its unique vision.
It has a confident and accomplished auteur unwillingness for either pandering or traditionally pleasing its audience, while simultaneously offering an archetypal hero-journey tale. If features an optimistic message ("the ducks are coming home..."), cloaked in a walkabout of despair and confusion that leads ultimately to 'home is where the heart is' platitudes that are not platitudes because of the sheer will of the performances.
That eerie feeling you get wandering the early morning fog of an abandoned theme park is what Miguel Llansó has harnessed here, and the gorgeous melancholy is tempered with a sharp wit and soothing empathy. The film is a balm.
It is also an African riff on Stalker, with the whole world being Tarkovsky's uncanny Zone. It has a similar abandoned train-yard, and a pretty young woman left at home in a deliciously decayed bowling alley. Water bubbles and broils in the post-nuclear desert of sulphur formations while the few remaining humans scavenge and weld. A curious spaceship floats in the sky, similar to South Africa's District 9, albeit similarities to Neill Blomkamp's debut feature sharply end here.
Those on Earth, in particular hunchbacked pacifist Candy, dream of marshalling the means to get to that ship, as if it were the last hopeful place. It will take his journey through the wasteland towards a meeting with the fabled prophet Santa Claus, avoiding the 'Second Generation Nazis' and other third century Molegan warriors, to do so.
Holy artifacts such as an acrylic painted vulcanized rubber Ninja Samurai Statue (i.e. a happy meal Teenage Mutant Ninja Turtle figure), a vinyl copy of Michael Jackson's "Dangerous" and other 20th century pop cultural detritus delicately litter the world and act as a kind of talisman of hope and desire; as well as consumer currency for a comically cynical pawn shop broker at the end of space and time.
A photo of sweat-beaded-on-his-forehead, Michael Jordan clothed in his Chicago Bulls uniform is Buddha, Shiva and Christ, all rolled into one. It is played for easy yuks, and yet they still land. More sophisticated comedy is also present in the Santa Claus' inflexible process. It reminds me of a mix of Terry Gilliam's Brazil mashed with Mel Brook's Spaceballs: "Fuck! Even in the post-apocalypse, nothing works without bureaucracy!"
His pregnant girlfriend Birdy holds down the home-front, with her beautiful eyes beneath a welders mask while belt sanding functional objects. While she has little to do put posture in the landscapes and pine for Candy's return, Selam Tesfaye's natural screen presence still makes an impression. The blasted world of Crumbs is as strange and creative as it is esoteric. For a Westerner's eyes, this is also true of contemporary Ethiopia and the rest of the African diaspora.
Candy's meeting with the denizens of the desert and its outposts show a wonderful tenderness in actor Daniel Tadesse. It is a wonderful performance that acts as a lifeline of empathy throughout a deliberately weird universe. He also manages to be dwarfed by impressive cinematographic images, as in Candy walking along a rail-bed through a lake, or slowly sweeping leaves off the tin roof of an oracle's treehouse.
The tone and the journey and the overall feel made me also want to get lost again in Russell Hoban's Saint Eustace parable in post-nuclear Britain novella, "Riddley Walker."
At a slim (but appropriate) 65 minutes, I have no idea where, outside of the festival circuit or a museum installation you will find this minor masterpiece, but if you want to sink into its peculiar philosophical and psychological head-space, the way Crumbs is delivered in measured vignettes is as sublime as it is surreal. See it wherever you can, if you must.
1
Sign-In to Vote
Tweet 0 Submit

Do you feel this content is inappropriate or infringes upon your rights? Click here to report it, or see our DMCA policy.
AfricaApocalpyseEthiopiafantasia 2015Fantasia FestivalScience FictionStalker

Sounds absolutely fascinating. The title is on netflix, which gives me hope. Thanks for the great review.

On Netflix??? You must be confused with the documentary Crumb.

No, the title can be saved to your netflix queue. There is no release date, but netflix is aware of the movie.

New to Netflix. I had forgotten that content varies from one country to another. The fact that I don't get a search result means nothing about what's available to you.

I didn't see it available on Netflix. I am hoping it becomes a cult film and plays in alt theatres and/or is available video on demand. It sounds freakin' awesome.

It is. But it is not interested in entertaining in any conventional way, it is way more interested in playing with images and ideas and occasionally emotions...And it is damn effective in those departments.

This was my favourite from my trip to NIFFF this year, and no doubt it will be in my top 5 of the year. So different from the usual post-apocalypse films. Obviously very influned by Afrofuturism, which we need more of, but directed by a European, so that adds to its wonderful strangeness.