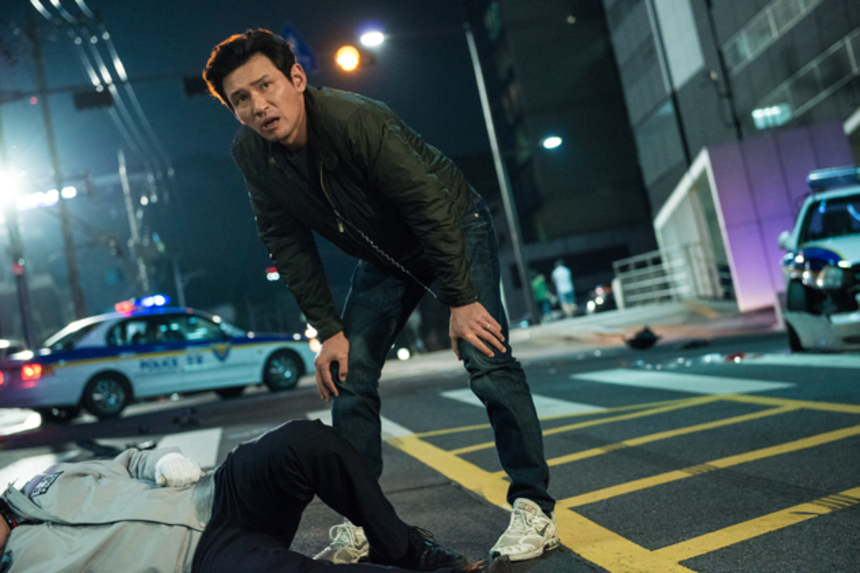 Korean action maestro Ryoo Seung-wan goes back to basics with his latest film Veteran, a breathless and hilarious crime thriller featuring a knockout performance from Hwang Jung-min. With fluid action choreography, punchy pacing and sharp editing, this infectious summer offering is a welcome return to form for the director after his underwhelming The Berlin File in 2013 and should be warmly received by fans.

Hwang plays Do-cheol, a detective who goes up against corporate heir Tae-ho (Yoo Ah-in) after a man is left in a coma. Though plenty of side characters fill up both Do-cheol and Tae-ho's camps, the story isn't much more complicated than that and goes exactly where you expect it to. But it's not the destination that makes Veteran so much fun, it's the wild ride it takes us on to get there.

Falling somewhere between the brawling chaos of The City of Violence (2006) and the paranoid cool of The Unjust (2010), Ryoo's latest parlays all his strengths into a confident package that is waggish, slick and to the point. Chief among his arsenal as always is long-time collaborator and top action choreographer Jung Doo-hong, whose kinetic brand of fisticuffs has rarely been better. Only a few minutes into the film, Do-cheol finds himself in a small garage among a cluster of gangsters. In this bravura scene, Jung uses all manner of props to hit the characters and move them around in what is a terrific showcase of resourceful choreography. Special mention should also go to cinematographer Choi Yeong-hwan, whose sharp lensing cleverly plays with framing and character positioning in lengthy panning shots such as one that introduces us to all the thugs and undercover cops in a shipping yard just as a deal is about to go down.

Fresh from the record-breaking run of Ode To My Father, Hwang turns up his lanky swagger and roguish charm to full effect as Detective Do-cheol. He's at the top of his game, delivering a physical performance that commands the screen when pulled into fights or melds with his pitch perfect comic timing in the narrative's many lighter moments.

While Hwang is definitely the star of the show, much of the film's energy is derived from the banter that flies back and forth. Even when they're not using their fists, the detectives and criminals are hurling barbs at each other across the streets, garages, clubs and ports the film brings us to. Oh Dal-su, also appearing in this summer's Assassination, gets many of the best gags as the harried police chief. In the film's funniest scene he rolls up to an escaping thug, slimily played by Bae Sung-woo, and offers him a bottle of water before passing him the handcuffs. Yoo Ah-in, playing the antagonist, isn't quite as impressive, though he does bring a dark edge and tenebrous intensity to his spoiled brat gone way off the rails.

Ryoo doesn't show us anything new with Veteran, save for some neat tricks from choreographer Jung, instead, he does what he always has, while using his experience to deliver a tighter product. That said, after a tremendous first 45 minutes or so, the film does slack slightly, but things pick up again before long as Ryoo and company treat us to one more all-out street brawl that sees the leads furiously go at it until only one man is left standing.

Do you feel this content is inappropriate or infringes upon your rights? Click here to report it, or see our DMCA policy.
action comedyhwang jung-minoh dal-suryoo seung-wanveteranyoo ah-in류승완베테랑황정민