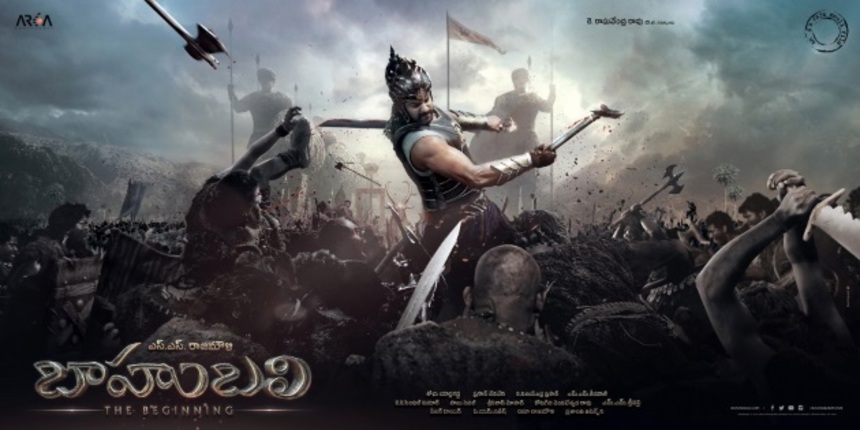 The word epic gets thrown around a lot these days. Thanks to meme culture, the word has been misused and overused so often that it has lost much of its meaning. However, for a film experience like S.S. Rajamouli's Baahubali - The Beginning, there is no more appropriate term. This film, the first of two planned features, does nothing by half measures. Every aspect of Baahubali - The Beginning is oversized, however, where that may bloat some films with less judicious aspirations, Rajamouli makes sure that every moment counts, and I've never seen a two-and-a-half hour film with so many clearly memorable moments.

Recounting the story of Baahubali - The Beginning is a bit of an exercise in futility, mostly because it's only half told by the time the end credits roll. However, in short, it's an origin story, the classic Hero's Journey, as described by Joseph Campbell in The Hero with a Thousand Faces (1949). The hero in this case is the humble yet inexplicably driven Shivudu, played by Telugu film star Prabhas with a dopey smile and shoulders like an ox. His journey seems to mark all of the phases of the monomyth, the call to adventure, the refusal of the call, the supernatural aid, etc... I get the feeling that if there are parts of the myth that aren't addressed in the film, it's only because Rajamouli has wisely tucked them into Baahubali - The Conclusion, due in 2016.

Along the way, Shivudu encounters strange new worlds about which he's only dreamed, as well as romance, action, and revenge. While Baahubali - The Beginning hews fairly tight to the established and expected structure of Indian masala filmmaking, Rajamouli's singular talent is making these concepts and tropes which are identifiably Indian, and even specifically South Indian, and molding them to fit his own vision, which is light years broader. The Tollywood veteran will see all of the tropes and definitive markers of that industry's patterns, but the newbie will look right past the formula to the meat of the film, which is an exceptionally tricky balancing act that no Telugu filmmaker has yet mastered. None other than Rajamouli.

Indian regional films are typically so culturally specific that outsiders are repelled by them almost immediately, with inside joke after inside joke whizzing over their heads and leaving the uninitiated viewer feeling flat at best, and alienated at worst. Rajamouli's talent, apart from his remarkable imagination (which we'll address later), is making films that work for both his home audiences and those abroad who are adventurous enough to take the plunge. The last great example of this was 2012's Eega, a film for which I have shown no hesitation in expressing my utter and complete devotion. That film was recognizably south Indian, but something in it was so universal that it was able to play to appreciative audiences in festivals around the world with no problem.

Baahubali - The Beginning's most obvious and acknowledged influences come from Hindu mythological stories, though the film itself isn't slavish to the religious conventions like many Tollywood productions. This arena is not a new one for Rajamouli, in fact, he's been dipping his toes in the period film waters for years. First there was the socio-fantasy film Yamadonga (2007) starring Jr. NTR, in which a young petty thief tricks the God of Death into relinquishing his throne. However, it was the next major effort, 2009's Magadheera where Rajamouli truly stretched his creative legs. He created an entire world for an extended flashback in this classic reincarnation story starring Ram Charan, mostly known in the western world as the film where the jeep jumps into a flying helicopter with predictably explosive results. Baahubali - The Beginning feels like the culmination of those experiments, only with even greater results.

Even though Baahubali - The Beginning is clearly a product of a career that has been building to this point, it's important to note that the film connects with its audience on a more visceral level. 99% of you will not have seen Magadheera or Yamadonga, but you will have seen something like John Milius's Conan the Barbarian, Ron Howard's Willow, John Woo's Red Cliff, or Peter Jackson's adaptations of Tolkien. These are the kinds of worlds that Rajamouli's film inhabits. Whereas the fictional settings of those English language films are mostly identifiable as medieval Europe, Rajamouli sets his film during a similarly unnamed time period in what is identifiably India. Apart from the change in scenery and language, the films are more kin to each other than one might expect. We get the parental issues of Conan, the reluctant heroism and impish charm of Willow's Val Kilmer, and the outsized scope and battle sequences of The Lord of the Rings or Red Cliff. However, with Baahubali - The Beginning, we get something more, a true heart and soul, rather than what is often empty manipulation.

While Baahubali - The Beginning may not match up to the adrenalin output of George Miller's Mad Max Fury Road, it's not entirely out of that ball park in several ways. Both films rely heavily on worlds constructed almost entirely within the minds of their creators, though Miller has had almost 35 years to build his and Rajamouli did it in two. Another truly impressive, and progressive, trait of both films is their treatment of women as not only action heroes, they are also widely seen and acknowledged as figures of authority. Granted, Tamannah as the warrior Avanthika, does fall for Shivudu even as she's trying to kill him, the character of Ramya Krishnan's Sivagami is more than able to strike fear into the hearts of her enemies and friends (when needed). No one will talk about this film as a feminist action spectacular with Prabhas in the lead, and with Tamannah's sacrifice of agency early on its really no wonder, however Sivagami is clearly the most in-charge character in the film. Hopefully The Conclusion brings back Avanthika is a much more substantial role.

Indian films, in general, have gained a nasty (and not undeserved) reputation as bloated and too long for their own good. At two hours and thirty nine minutes, it seems like it'd be easy to pin those labels on Baahubali - The Beginning as well, however, the film wastes not a single frame. Even during those moments when it feels as though the film may be meandering, it is for a purpose. One thing that truly separates this film from its English language spiritual forefathers is its conviction to create a world that feels lived in and real. The best way that Rajamouli does this is by developing his characters into people to which the audience can relate. Each of their actions relies upon an experience in their past, and Rajamouli wants to put that background knowledge in the hands of the audience so that in the end, these are our friends, and it works beautifully, even as the film stretches beyond the comfort zone of most filmgoers.

The structure of Baahubali - The Beginning even manages to mimic the structure of many south Indian films, but especially Rajamouli's own Magadheera. Even though Magadheera was split between the modern day and the 17th century, its origin-flashback-conclusion structure is something that Rajamouli recycles to even greater effect in Baahubali - The Beginning. I've complained more than once about the incessant and ridiculously long flashback sequences in Indian films, however, this film makes it work, even better than in Magadheera. Westerners might be put off by the mention of an hour-long flashback sequence, but trust me when I tell you that it's worth every minute.

It isn't only the structure of the film that works incredibly well, it's also the execution, which could have been disastrous. With a film like this, on a scale never even attempted in Indian Cinema, the probability of spectacular failure in terms of technical execution should have been incredibly high. However, Rajamouli is one of India's greatest trailblazers in terms of incorporating visual FX into his worlds in a photorealistic way. Tamil Cinema's Shankar is a visual wiz, but his work is based on cartoonish exaggeration, Rajamouli wants it to feel real. It felt real enough in Eega that audiences around the world sympathized with a housefly. The FX in Baahubali - The Beginning are on the cusp of being on par with Hollywood's finest, but here Rajamouli manages to use his FX to greater effect than Hollywood typically does.

Rajamouli's reliance on FX is not to distract the audience, it is to augment the reality that he has created. Anything that he can build practically, he builds, we saw that in the behind the scenes gallery we posted back in May. When Rajamouli's imagination extends beyond those earthly limits, he nudges the truth a bit with some help from his FX team. Is it always perfect? No, there are a few shots where the FX didn't hold up 100%, but I certainly found myself more enamored with the story than wondering how they accomplished any particular shot in the film. Isn't that what visual effects are designed to do, anyway, to disappear in service of the story? Mission accomplished.

What it all boils down to is that SS Rajamouli is a director with a heart as big as a house, and ambitions bigger than you can imagine. His films redefine what the scope of Indian Cinema can mean, both in terms of this kind of epic story as well as who the audience for this largely regional cinema is. Baahubali - The Beginning is a film for the child in everyone, the one who wants to believe in heroes and derring-do, and for the adult in everyone who wants to believe that they can be the hero of their own story, that they just need the right motivation. I've waited all summer for a great film, and Baahubali - The Beginning is the first film that feels to me like it hits all of those notes. When Hollywood comes knocking on Rajamouli's door, don't say I didn't tell you first.