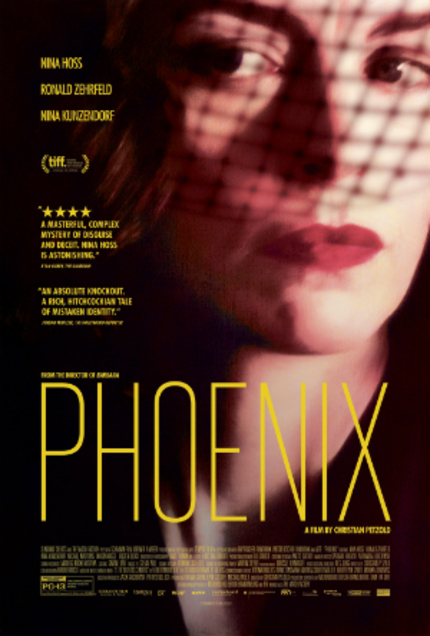 Christian Petzold (Ghosts, Barbara), perhaps one of the most gifted storytellers working in cinema today, strikes gold again with Phoenix, a Hitchcockian, postwar noir revenge flick.
Clocking in at a very lean 98 minutes, the film revolves around a concentration camp survivor named Nelly, beautifully played by Petzold's muse Nina Hoss in her sixth collaboration with the director. Nelly returns to Berlin, now occupied by American GIs, with the aid of Lene (Nina Kunzendorf), a case worker for the newly established Jewish State, who keeps urging Nelly to leave Germany, go to Palestine, and start anew as soon as her bandages come off.
Badly disfigured by a gunshot wound in the camp, Nelly is told by doctors to choose any face for reconstruction or 'recreation' - perhaps a face of a movie siren or to be a different person altogether. Despite the urging of others, Nelly insists on having her old face back, if at all possible. Even though she was told that her husband Johnny (Ronald Zehrfeld of Barbara) gave her up in order to save his own skin, Nelly can't stop searching for him, for she still loves him. They were a famous musical duo before the war, Nelly a chanteuse, Johnny a piano player.

Her search for him leads to Phoenix, a cabaret where Johnny now works as a busboy. She is shattered when he doesn't recognize her. But there is enough of a passing resemblance that triggers Johnny to enact his scheme: he wants Nelly, now Esther, to pretend to be his wife who miraculously survived the camp and is now back, so as to get money from her estate (he secretly divorced her right before her arrest).
Still deeply in love with Johnny, she goes along, keeping her emotions in check, pretending to learn old Nelly's behaviors, speech and writing (or just being herself), in order to see if he recognizes her in time. This might need a total suspension of disbelief from the audience. But we do it with Vertigo anyway in order to go along for the ride. In Petzold's assured hands, melodrama is kept to a minimum in this rather hokey premise.

Hoss is superb as a conflicted woman, hiding a terrible secret in front of an unusually unsuspecting husband. You can detect her bottled-up emotions in her expressions without losing her composure. It's just marvelous acting. Unlike his kindly doctor in Barbara, Zehrfeld's Johnny is a cold-hearted man whose priority is surviving. Kunzerdorf has a real presence, as a woman deeply scarred by the atrocity. Her Lene is the real tragic figure in the film. Stefan Will's jazzy bass score adds to the era it's portraying and helps set the mood of the film. Cole Porter and Kurt Weill's music dominates the soundtrack, and Hoss' rendition of Speak Low at the end is haunting.

Petzold plays around with the idea of forced forgetfulness. After the atrocious war, many Germans wanted to erase its shameful history from their minds. It's Nelly and Lene who can't let go. Once she reemerges, she asks Johnny how to answer when the others ask about the camp. Johnny simply tells her, "They won't." But it's as if Johnny doesn't want to recognize her, even though she is right in front of him - buried and gone.
At first, it's very hard to buy that a woman as striking as Hoss, with her penetrating blue eyes and sharp cheekbones, would be unrecognizable to anyone despite the disfigurement. Petzold's regular theme of identity also plays a big role here. Nelly never had to be conscious of being Jewish before, but Nazi Germany made her do so, in a drastic way.
She literally loses her face, but she longs for her old self even though she learns along the way that nothing is the same anymore. With these heady ideas in the background, the film moves along in its stunningly economical pace, without sacrificing beautiful period details or complexities of characters. In preparation for Nelly's comeback from the dead (to legitimize the inheritance), Johnny divulges about how his neighbors and friends turned away from them once Nelly was being hunted by the Nazis.

The film perfectly builds up to its emotionally cathartic ending. And what an ending! Phoenix is a deeply moving, deeply satisfying film by an incredibly talented director at the top of his game.

Review originally published in March 2015, when the film played as part of Film Comment Selects. It opens in select U.S. theaters today via Sundance Selects.

Dustin Chang is a freelance writer. His musings and opinions on the world can be found at www.dustinchang.com
Sign-In to Vote
Tweet 0 Submit