Review: WHEN MARNIE WAS THERE, A Melancholy Animated Mystery 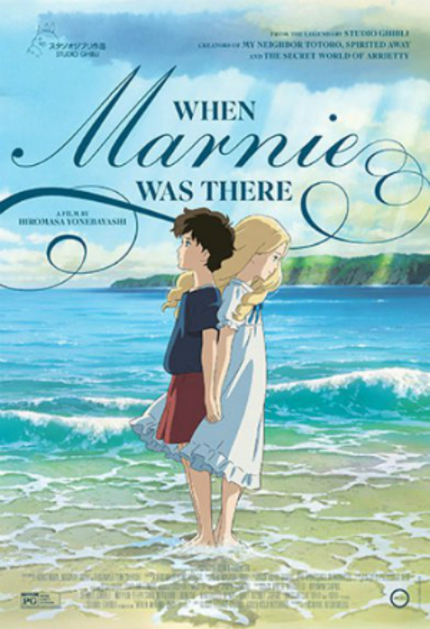 Studio Ghibli and its catalogue of extraordinary animated films has been built on the back of two men: the creator of its most beloved characters and star of the studio, Miyazaki Hayao and the often over-looked, but no less talented, Takahata Isao.

Last year saw the announcement of Miyazaki's retirement and the release of his last film, The Wind Rises, followed a few months later by Takahata's latest, The Tale of Princess Kaguya. Takahata may not have announced any desire to quit, but his advanced age (the director is now 78), and the length of time it takes him to put a film together leaves a question mark over the artist's ability to helm another feature length work. Regardless of whether we've seen the last from the legendary pair, Ghibli is moving into a new chapter with a next generation of filmmakers.

Yonebashi Hiromasa's first Ghibli feature was 2011's The Secret World of Arietty and the director has returned with another classic English children's book for adaptation, Joan G. Robinson's 1967 ghost story When Marnie Was There. The story follows Anna, a young girl living with an adoptive mother she refers to as 'Aunt'. Anna struggles to connect with the people around her, a morose and withdrawn attitude has left her alienated at school and so she is sent off to the countryside to see if the fresh air and new surroundings will do her any good. Staying with open and lively relatives in a beautiful coastal town, Anna, who remains a detached loner, finds herself drawn to an old, apparently empty house across an inlet.

After one particularly traumatic night Anna runs away, rowing across the water to the mansion where she meets a little girl. With blonde hair, blue eyes and a period dress the girl appears to be a dream and yet she is real to the touch. The girl, Marnie, is also lonely, ignored by her often absent parents and left in the clutches of a bullying old maid and so the two girls form a secret friendship, meeting nightly by the water after the sun goes down. When eventually a new family moves into the old mansion and Marnie disappears for good, Anna quickly befriends the new girl living there and the two set about discovering the true identity of the phantom friend.

When Marnie Was There is set very much in the real world, and the work reflects that. The painted backgrounds capture the picturesque little town, the mysterious house and the little rhythms of life with Ghibli's typical attention to the detail, at its best at a quaint local festival full of colored kimono's and decorated trees. The animation is typically beautiful without offering anything the studio hasn't done before. It lacks the epic quality of The Wind Rises or the stylistic beauty of The Tale of Princess Kaguya, but it captures the charm and mystery of the little coastal town effectively. The little house across the water is eerily similar to that of the The Woman In Black; both are haunted mansions cut off by the whims of a rising tide and this film carries a similar antique charm but without the chills. This is no horror movie though. The ghostly happenings carry a softer, more melancholic tone and it isn't a ghost story that plays for shocks but pontificates on the sad reality of grief and loneliness. When the ghost-like Marnie is present she's very much a real girl, physically present in the situation, so much so that Anna can forget the questions surrounding her presence and instead enjoy the company of someone she can relate to.

Anna is an interesting protagonist and it's important that we feel enough for her and are suitably interested in her plight to relate to her sadness. There are some wonderfully delicate moments that add a subtleness and realism to the film. The first scene shows Anna on the verge of opening up and showing her artwork to a teacher, the faintest of smiles about to break out across her face only to see the teacher distracted and turn away, and Anna withdraws into her fear and self-loathing.

All the characters are well developed, much more so than in the director's previous work in which the narrative felt rushed, this film takes it's time and has the space to flesh out it's characters, from Anna and Marnie to the supporting cast with all of their ticks and nuances, from the over-eating wife and toy-making husband to the silent fisherman on the lake.

When Marnie Was There struggles to compete for attention with the last works of Miyazaki and Takahata. The Wind Rises bore with it all of the attention of its creator's retirement and Princess Kaguya, visually, is somewhat unique in the Ghibli cannon. Whereas Miyazaki's adaptations are filled with an abundance of wild imagination and innovation other films have at times felt more like perfunctory adaptations of the source material, and other than changing the setting to Japan, add little in the way of innovation or the touches of uniqueness and quirkily inventive characters that define the studio. The movie is a melancholic tale that won't captivate children in the way Totoro and Kiki's Delivery Service have done, but should be appreciated by older fans with an appreciation for a touching story that is beautifully told.

The central mystery unravels at a timely pace that will have you guessing at the true nature of the central relationship right up until its tearful conclusion.

Photo credits: © 2014 GNDHDDTK. Review originally published in July 2014 during the film's theatrical release in Japan. It opens in New York and Los Angeles on Friday, May 22, and will roll out to additional markets in the coming weeks. Visit the official Facebook page for theaters locations and dates.

When Marnie Was There