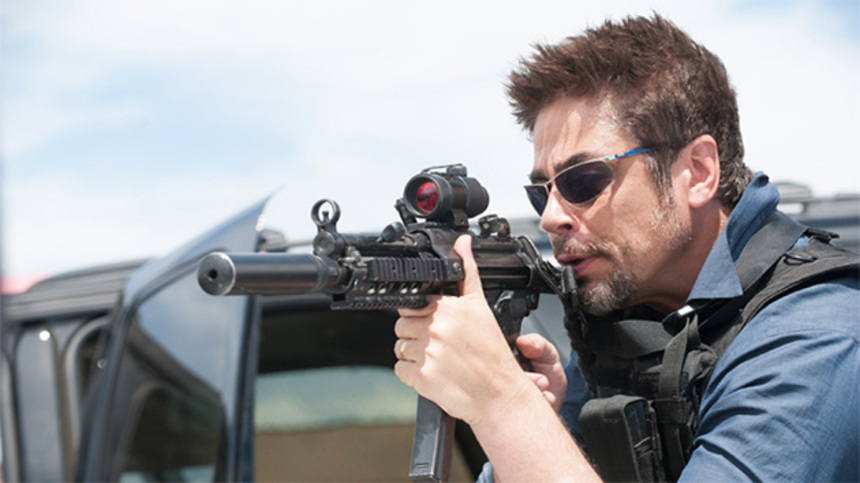 In white writing on a black screen we're taught that Sicario was the name given to Hebrew Zealots (the name means "dagger men") who fought to expel the Romans in Judea. Now the name is used in Mexico to refer to a hitman, a particularly prominent role given the enormous stakes of the Cartel-run drug war.

We hear the low beating drums of Johann Johannson's splendid score, and are thrust into a police raid on a Suburban Arizona home. Guns blazing, the FBI are led by Kate Macy (Emily Blunt) and her partner Reggie Wayne (Daniel Kaluuya) into the fracas, only to discover a true horror within.

Macy is then tasked on a very different mission, coming into contact with a seemingly lackadaisical agent named Matt (Josh Brolin), and in turn a mysterious Colombian named Alejandro (Benicio Del Toro).

On the surface this is a taut, beautifully executed drug drama, and director Denis Villeneuve's talent for keeping tension high is very much on display. Diving deeper, this is a film that tackles deep moral ambivalence, asking questions more than giving answers, showing from an American perspective the very real (and very complicated) circumstances that exist between the consumer nation and the producer/distributors.

At its best the film delves deeply into this conundrum, illustrating effectively how differing opinions about ends justifying means collide in sometimes spectacular ways.

Villeneuve's film feels at times deeply operatic, but it never loses itself into reverie. Blunt in particular is extremely effective, coming across as authentically powerful and vulnerable in equal measure. Brolin's a hoot, as always, and Kaluuya is believable as the supportive partner. But it's Del Toro's character that gives the film its title and its most memorable moments, a cool competence and calm efficiency of violence and dialogue that he's instantly captivating.

Enough cannot be said about Deakins' photography, and for the love of the cinema gods we can pray that this will finally garner him his much deserved Oscar. From the bleached-out shots of the opening siege through to night-vision raids, we get a raw, stark palate that makes things quite black and white. Yet it's in the fine gradients captured - the stunning sliver of sunset that the crew walk by to enter a tunnel, the luminously captured magic hour and early evening scenes shot with an azure flourish - that best demonstrate visually the space between black and white, the grey areas that much of the films visual palate (and moral compass) is directed.

In so many ways this is the culmination of Villeneuve's capacities of a filmmaker. It has the brutal and shocking violence of Polytechnique, some of the procedural elements of Prisoners, and much of the confidence, experimentation and sense of dream that made Enemy so interesting. It's the collision of these sensibilities - the art film, the action movie - that Villeneuve shines, creating a marvelous hybrid that's a stunner.

A film that at times feels like an adventure, while at others it affects one like a stab in the stomach, Sicario's dagger plunges deeply. Its ethical ambivalence combined with its superbly executed filmmaking makes this a very special film indeed, a showcase of a great Canadian talent at the top of his creative and technical game. Bravo, Monsieur Villeneuve, bravo.