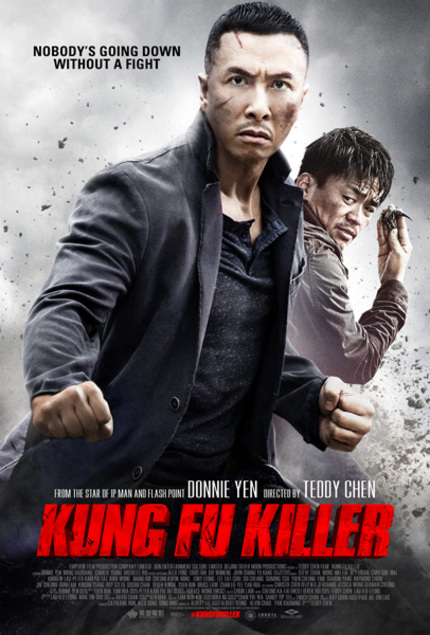 Hong Kong action superstar, Donnie Yen, is back in a big way with his upcoming martial arts film, Kung Fu Killer. The film, which opened in Hong Kong under the title Kung Fu Jungle, is a great return to form for Yen, whose last few films prior to this one were a bit of a chore to say the least. Kung Fu Killer sees Yen in top form, as a martial arts master who is seeking out a kind of evil twin who is killing other masters in the hopes of becoming the number one kung fu master in Hong Kong.

Kung Fu Killer has a lot going for it that Yen's most recent flops haven't. It has a tight, cohesive story with minimal flourish, it has very effective editing during the fight sequences, and most of all, it has a ton of fighting. Playing Yen's adversary is Wang Baoqiang (Lost in Thailand, Fairy Tale Killer), who has some really amazing moves and plays his role as the determined and unstoppable killer to the hilt. When the two of them finally face off at the end, it's one of the most exciting, longest, most brutal fights that Yen has committed to film in a long time.

In order to help get you guys and gals pumped up to see this really fun film, Well Go USA has provided us with an exclusive action sizzle reel. It's only 30 seconds, but I can say that in addition to the amazing martial arts you see on display here, there's a ton more of the good stuff in the movie. Well worth checking out!

Enjoy this clip from Kung Fu Killer and click the link below to find the film in a theater near you on Friday, April 24th.

Do you feel this content is inappropriate or infringes upon your rights? Click here to report it, or see our DMCA policy.
donnie yenkung fu killertrailer