Destroy All Monsters: Dudes With Feelings In FURIOUS 7 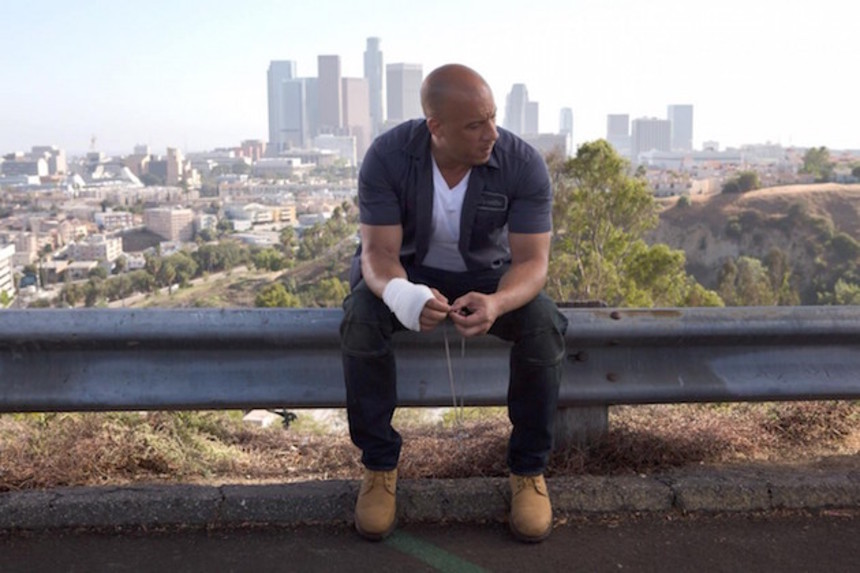 I suppose the reason we continue to tolerate - all right, adore - the Fast and the Furious franchise is the degree to which it's simply so amiably palms-up about everything. It knows what it's about, and based on the box office results this weekend, what it's about is working just fine.

So, in Furious 7 (read Jim Tudor's full review here), when we arrive at the oasis in the desert where an amateur street racing contest (or something) is being held, and a cloud of bikini-clad babes parts to reveal the race's starting-line girl, and we spy her ass and thong from underneath her nonexistent skirt, director James Wan doesn't just cut to it once; he cuts to it five times. From a low angle. In IMAX. Because why not?

Likewise, in a signature set piece that this franchise will be hard-pressed to top, our five stunt-racing superheroes back their sports cars out of the cargo door of an in-flight Hercules, and parachute onto a single winding mountain road that can't be accessed in any other way - but which (currently) contains a convoy of bad guys escorting a hacker who knows how to track every single human being on the planet.

And of course the hacker turns out to be a woman; and a stunningly gorgeous one, at that, played by Game of Thrones' Nathalie Emmanuel. Who will shortly be spied emerging from the sea, Ursula Andresque, as the action shifts to Abu Dhabi.

Because again - why not?

The sequence on the mountainside is so CGI that it quickly renders questions about the Weta-ization of Paul Walker moot; it also made me nostalgic for the days when actual, physical stunts were the principal draw of a somewhat slower-paced series of films about street racing and crime.

There was a time when Walker (with his co-pilot, Tyrese Gibson) launching a Mustang off a pier and onto a passing yacht was the height of a Fast movie's improbability. Nowadays, the only thing improbable about that sequence is the fact that Walker and Gibson came away from it severely injured.

Walker is, of course, at the heart of Furious 7's improbabilities. He was killed in mid-production, and the best VFX artists in the world have spent the better part of the last year assembling an augmented narrative for Walker's Brian O'Connor that would allow the actor to take his leave of the franchise without the gruesome necessity of the character's onscreen fate mirroring Walker's offscreen one.

The result brings to the forefront something that the Fast films have toyed with since at least the reboot (a.k.a. film 4): the degree to which its men are allowed to have actual, developed emotional lives.

(Actually, since before the reboot. Tokyo Drift is a dreamy neon sonnet/yakuza tale. 2 Fast 2 Furious is the most bromantic action movie since Casablanca - Brian and Roman literally get a sunset reconciliation scene where they confess that it's... uh... "all good, brah.")

It's an undercurrent throughout these movies, and is as palms-up and honest as the franchise's fascination with side-boob. Well yeah: side-boob is hot. Sports cars are cool. And loving your family and your friends? Is what makes you a man.

I admit it's an unexpected note, to me; but then, I was raised to distrust the emotional intentions of the exact type of characters that the Fast franchise cleverly centralizes.

Take the My So-Called Life structure. In my pop culture growing up, the unnoticed nerd (that would be Brian Krakow, or me, for those playing the home game) had the heart of gold and would hopefully, given enough seasons, underdog his way into the protagonist's heart.

The meathead idiot who literally composed a song about and to his car - that would be Jordan Catalano, played quite forward-thinkingly by car-singing meathead Jared Leto - was the bad guy, the obstacle; the depthless piece of eye-candy whose innate vapidity would eventually prove him unworthy of Angela Chase's love and affection.

Except, Jordan wrote that song about his car - and the Furious franchise is that song. What has Revenge of the Nerds done for us lately? Oh right.

"It's about famuhly," Vin Diesel will intone at the tail end of nearly every speech in at least the last three movies, so much that it's become more of a joke than a mission statement. Diesel's Dom Torretto is talking about the loose affiliation of carjackers and anarchists that form the Fast franchise's multiracial answer to the Ocean's 11 gang, and how they - like a million onscreen cadres before them, from the Wild Bunch to the Avengers - are a unit unto themselves, even when more blood-based affiliations have failed them.

And yet what Furious 7 extends into the space is the fact that these men - ambulatory hunks of suet all, from prehensile shawarma stack Diesel to gun-toting Snapchat boner Dwayne Johnson - have families of their own.

Diesel's always been connected to Paul Walker through the sister character, Jordana Brewster (the two male leads can't fuck each other, so a proxy was needed); but this time, Johnson pulls out a heretofore-unseen daughter, who guards the Rock's hospital bed like a deputized Dora the Explorer.

And Walker has a son and a minivan, and a baby on the way - the latter, I suspect, added ex post facto to hasten and strengthen his character's exit from the franchise. It was a difficult situation, managing the circumstances of Walker's off-ramp from any future Fast films, but the storyline works because it plays on what the films already contained.

In these movies, caring about your family and wanting to do right by them - and even, importantly, feeling conflicted about risking life and CGI limb in their absence - is not seen as weakness, being a sissy, or any other kind of a soft option... a.k.a., what we might have expected from movies so deliriously focused on side-boob and sportscars.

Perhaps solely due to the circumstances of Walker's death, in fact, Furious 7 reconfigures the love of family as a greater kind of strength, a feat of superheroism that makes dodging bullets and jumping sportscars out of skyscrapers seem like a menial - and, ultimately, unappealing - day job.

To underline the point, and face the inevitable meta-text that has bubbled up around the film's most notorious offscreen influence, Furious 7 concludes with a pitch-perfect (for this franchise, anyway - i.e. songs to cars) elegy to Walker. The montage allows the performers and the filmmakers to stand up for a moment and address the reality of Walker's loss while simultaneously concluding O'Connor's family-driven departure from the circle.

It's a hearty, unabashedly emotional moment. Diesel doesn't quite squeeze a single tear or break down on camera, but the hurt - and more importantly, the permission for the men to feel the hurt - is palpable. Real men, in Furious 7's calculation, do feel. And then they take off down the highway and get back to livin'.