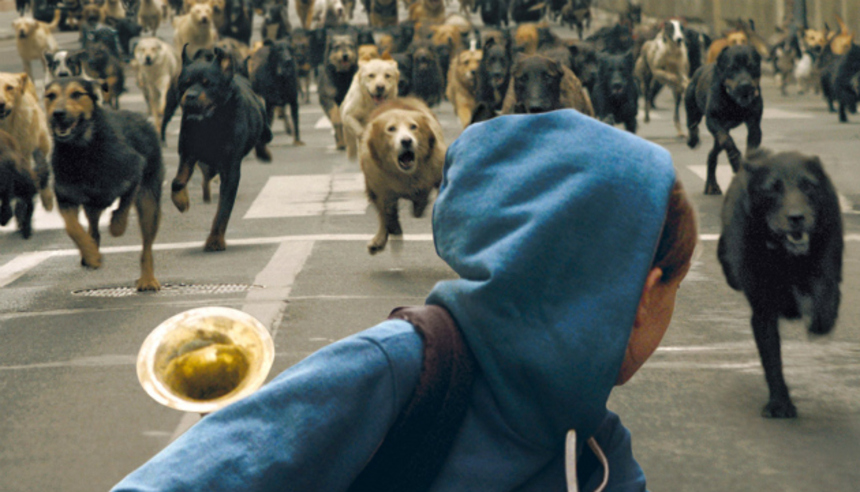 Doggedly heavy on allegory, Hungarian director Kornél Mundruczó's White God (originally Fehér Isten) has a relatively simple premise: beware the comeuppance for those that treat badly those they believe to be inferior.

At its heart, the film plays as if Samuel Peckinpaw [sic] directed The Incredible Journey, that Disney Animal film referenced in last year's Cannes hit Inside Llewyn Davis.

The title was at first a mystery and mere pun, but appears to at least partially be a play on White Dog, Sam Fuller's 1982 canines-and-racism flick. A revenge fantasy from the canine perspective, this is part political polemic, part action thriller, with a climax that is equal parts hyperbolic and effective.

The archetypes abound, be they in the notion of the denigration of those lacking "pure breeding," to the most clunky metaphor in the film, making overt the notion borrowed from Cosgreve that "music has Charms to soothe a savage Breast."

As effective as the film is simply on casual viewing, anyone that has any notion of the challenges of working with animals on film can only marvel at the performances that Mundruczó and his (I'm assuming tragically underpaid for their Herculean efforts) editors have captured. Anthropomorphized all to hell, the dogs play with their titled heads and wide-eyed expressions as eloquently as any animated adaptation of George Orwell's Animal Farm has played. 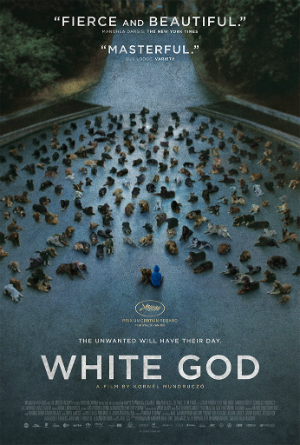 Add in a fantastic, precocious performances by the young lead Zsófia Psotta, and you've got with kids and animals two of what Hitchcock felt were cinema's greatest pitfalls presented in supremely effective ways.

The story is slightly overlong, the metaphor a little bit too on the snout, but it manages to pull it all off by the finale, never biting off more than it can chew. The political analogies are manifold - slavery, genocide, suppression, class warfare, xenophobia, you name it - but equally it's a straight ahead film about a girl coming of age, finding very adult expressions of empathy for those under her care.

IMDB lists the animal trainer as Teresa Ann Miller, and her credits show several decades of training animals for TV and film. Whatever coaxing was required, combined with the previously mentioned editorial staff that would have had to dig through the dailies, we get a film that genuinely provides a richness of characters for the canines. I'm assuming the crowd shots were augmented with green-screens and treadmills, but any effects are beautifully integrated into the whole, making for a seamless image.

At its best, White God is a cautionary fairy tale about contemporary Europe, a continent where both left and right wing are growing increasingly reactionary, and entrenched notions of "purity" continue to plague various countries as they balance their unique cultures against the hegemony of a greater, interconnected world.

Review originally published during the Cannes Film Festival in May 2014. The film will open in select theaters in the U.S. on Friday, March 27. It will also open on the same date in Toronto (TIFF Bell Lightbox), Montreal (Cinema du Parc), Vancouver (Vancity Theatre), and Calgary (Globe Cinema), and on April 14 in Saskatoon (Broadway Theatre).