On Thursday, October 23, Morelia hosted the Mexican premiere of the Cannes selection White God, a terrific Hungarian film about a little girl and her lost dog Hagen.

Directed by Kornél Mundruczó, White God shows the rotten side of humanity, with many different aspects of the (cruel) reality that dogs - and animals in general - have to face every day not just in Budapest, where the movie is set, but in the whole world. The film plays like a revenge fantasy, but it is really clever and never feels gratuitous. Plus, it's definitely a technical masterwork, a very ambitious project that demanded a whole lot of work and deservedly got the Palm Dog Award.

After its successful first screening in Morelia, I had the honor to be included as part of a roundtable interview with Mundruczó. Two fellow journos and myself chatted with the director for over 20 minutes, and now you can read the entire conversation here.

Question: You said the script was based on a book by J.M. Coetzee. Which book?

It's a totally free adaptation, more of an inspiration. There's a line inside the book, which happens in a dog pound. That's why I went to a dog pound just to check how is the situation in Budapest, and I was completely touched. I was blind before.This personal moment, when I'm standing at the dog pound, was the starting point.

You do a very interesting mix of genres. I thought the film is divided in two main parts. The second part seems to have a strong influence from the American horror movies. Was that your intention?

I'm a countryside boy. When I was young it was still the communist time, so in this small city we had two possibilities to have any kind of film culture. There was the cultural house and the classical film clubs. The conception was very simple: one month, one director.

I saw there Rainer Werner Fassbinder, Robert Bresson, Andrei Tarkovsky, and all of the big names. I was very touched by them. In the same time, there was a city cinema. With the end of the communist time, the post-apocalyptic Hollywood movies started to came, like Blade Runner and Alien.

I think this film is inspired by both parts: eighties movies like The Terminator and Fassbinder melodramas. The main thing is that for the last ten years, pure genre movies are dead. That was the difficult thing to find: how we can start like a classical Walt Disney movie and ending like a horror movie. That's contemporary life in Hungary.

We realize with the film that violence generates violence.

In the last ten years, Europe started to forget and repeated the same stories somehow. More and more strict, the extreme right is very popular, and this is just fear we have. Why we have fear towards freedom? That's one of the common European fears.

This film is repeating something that happened already, with a different form. It's very dangerous to forget our history.

What was the most cruel or shocking thing when you were filming the scenes with the dog fights?

The whole shooting was under U.S. law, and you basically can't do anything with animals.

This was very difficult; the training took four months and we shoot it in five days, then we had one minute in the movie (laughs). The dogs were playing and playing, but it's believable. Of course it's an illusion and it's fake blood, but in the whole world there are people who make fights with dogs. This really happens, and that I would like to show.

The dogs are the closest animals to humans at socializing, because the dogs are thought as part of the family. They live in a family and every human knows they are family. If you watch the film, after ten minutes you watch him (the protagonist dog Hagen) as a human. 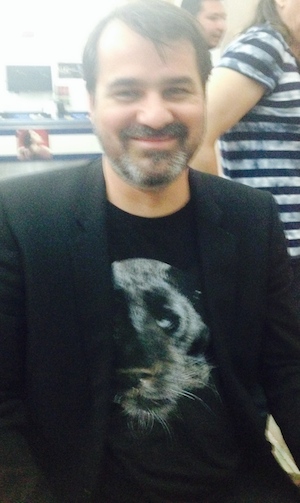 TWITCH: Continuing talking about the dog fights. Other films have been misunderstood and people really think they are cruel. Have you had any controversy in that regard with WHITE GOD?

Not yet, luckily. In one hand, we made a documentary out of the movie; we shoot it to show everything was clean, secured, and trained.

It was really a positive teaching by the trainers, always saying "good, good boy" to the dogs. All of the dogs, including the main character, came from dog pounds. After the shooting, we made a huge adaptation program and all of them are now with families again. This is the most successful part of the film.

TWITCH: Thinking in the English title, was Samuel Fuller's WHITE DOG an inspiration for the film?

Actually not, but when I went to Cannes, everybody thought immediately that was a fantastic idea; how I had changed from dog to god. And I was so proud, of course, of having this fantastic idea out of Samuel Fuller!

I quite like Fuller's movie, though I didn't know it. The White God title is coming from Coetzee's Disgrace book, as a perspective of the dogs: we are the white gods for them.

Can human beings find this redemption with the dogs that the film shows at the end?

The ending is a piece of silence. It's our responsibility to decide how we continue, and this is the job for every audience. I have no positive or negative answer. I just had a question and show a lot of contradictions.

TWITCH: Out of all your films, is this the one that has been the most difficult to make?

Yes and no. This movie was really planned as a small project, very cheap, just Hungary, just one dog. But it became my most expensive film and, yes, the most difficult one. It's a technical spot and I quite enjoyed it.

I think this movie is opening the doors for me, so I would like to continue on this race.