Review: MAPS TO THE STARS, Cold, Dreary, And Dull 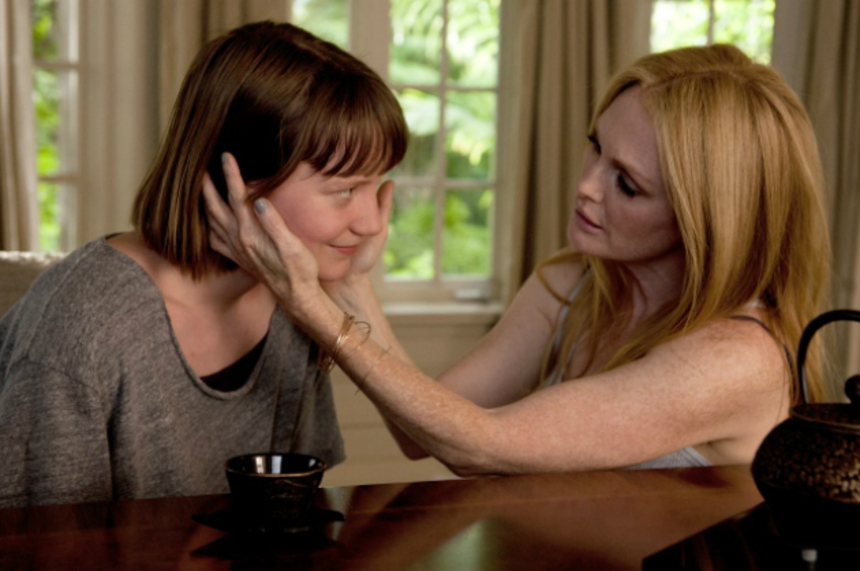 For the second film in a row, David Cronenberg has made a stinker. Yes, there were some bits in Cosmopolis that didn't suck, but it was hardly vintage DC. As I mentioned in my review for that other Robert Pattinson-in-a-limo movie, my biggest disappointment of late isn't that Cronenberg is trying new things (applause!), stepping outside for the last decade or so from his bread-and-butter genre flicks. But I am really not along for the ride with his latest foray into somber, clinical and dreary character pieces.

I could go on and on about how Crash's captivating and nihilistic ennui has been replaced of late with a glossy and laconic moping that seems characteristic of this latest phase. As before, I can't even point to any truly repellent performances -- the casting seems on par with his great works, and the actors are doing exactly what the film calls for.

I'll continue to decry, however, Peter Sushinksy's digital photography. The man shot The Empire Strikes Back, and I'm saddened to see that with these last Cronenberg flicks (and the truly appalling-looking After Earth) that this master of line and tonality is making films that look like video-game cut scenes.

Story-wise, this is a meager offering, an uneven tale about a child actor and his commanding parents, a young girl who comes to New York and befriends a limo driver, and a needy and resentful actress past her prime. How these stories connect is the core plot of the film, but this is hardly the stuff of a compelling who-dunnit.

Save for one scene that's as jarring as it is (finally) effective, the whole film feels like it shuffles along.

Cronenberg famously shoots most of his films in his native Toronto, and here, with augmentation by CGI, the city does an almost passable job of playing Los Angeles. That said, between the chilliness of the performers and the sterility of the lensing, this is the least Californian representation of L.A. that's been captured in some time. Sure, we can convince ourselves that this is a different Hollywood, but even when the few location shots are intercut, it all feels a bit stretched.

If we start nitpicking the actors' choices, it's clear that John Cusack simply lacks the charisma and zeal in order to be a cultish leader. One need only look at Tom Cruise in Magnolia, or even Leonardo DiCaprio in The Wolf of Wall Street, to see how different choices result in far more captivating experiences.

Julianne Moore's raw power is on display, but the Blanche DuBois act feels equally wrought. Mia Wasikowska and Robert Pattinson are perfectly fine. Newcomer Evan Bird can spout "Jew cunt" as written on the page and come across as douchey when called for, but his venom comes across more as school-bully than truly demonic child actor.

Finally, a chunk of the film rests on a trope that's so tired and ridiculous that it almost plays as a comedy, a plot device more deserving of a M. Night Shyamalan script than one by Mr. Cronenberg. Again, as in Cosmopolis, I think a huge portion of the blame can be laid on the plotting of the script (it was eventually turned into a novel when the project was delayed). After a while, we just don't care about these miserable people, and no matter how stylized or shocking something is meant to be, it just feels more laborious than intense.

I can hope for new and better things from the filmmaker, and, as above, am always glad to confront whatever he has in store. Cronenberg is now in a phase that simply no longer speaks to me, a cold and dreary cinema that's as dull as it is forgettable. The director remains one of the great artists of the medium, so I can only hope that his next project falls more in line with my own appetites. Hopefully he'll also encourage his long time collaborator Sushinksy to stretch the medium of digital video into new and pleasing ways, rather than crafting another in what's now a line of shitty looking, lousy-to-watch flicks.

Review originally published during the Cannes Film Festival in May 2014. The film opens in select U.S. theaters on Friday, February 27.