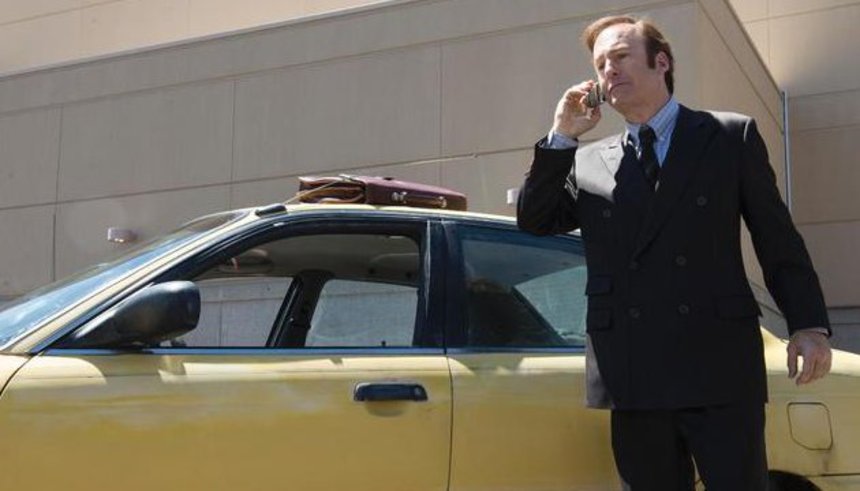 Better Call Saul was always going to struggle, like all prequels do, to feel relevant. The nature of a prequel makes it an afterthought, but it's a good start that Saul firmly places itself in the world of Breaking Bad, but doesn't feel like it's all about Breaking Bad.

It also helps a great deal that "Uno" is a supremely confident premiere episode, anchored by a tremendous performance from Bob Odenkirk and constantly demonstrating just how much an understanding of visual storytelling can elevate simple material and infuse it with thematic relevance. The larger story of Saul Goodman (here known by his true name, Jimmy McGill, before his rebranding) is essentially that of a capable but unlucky lawyer who helps a science teacher become a drug kingpin before having to flee when everything comes crashing down.

So, Saul's confidence is all over the episode, set back in 2002 and way before he met Walter White. He enters scenes without hesitation and takes prominent positions within them, with director Vince Gilligan repeatedly framing him in such a way as to draw attention to how he demands attention. And, then, he has the rug pulled out from underneath him. Again and again.

The courtroom scene here is a excellent and simple example, directed to both highlight Jimmy's skills as a charmer and just how out of luck he is by representing such awful clients. The episode barely needs to show us the evidence on the tape, you can read the whole thing by listening to the thing and watching the contrasting reactions on the faces of the jury and the title character. This is expertly delivered black comedy.

And that's something it's got in common with the show that spawned it already, the tone really isn't so different. Breaking Bad has been renowned as a dark show but always had a way with humour that sat on the very edges on black.

The visual habits of Breaking Bad are on display here, from an abundance of point-of-view shots, to effective use of close-ups and a way with dramatic lighting that most shows couldn't muster (just look at the scene where we meet Jimmy's brother, for example, and how much work the atmosphere does in building intrigue). And with the addition of Dave Porter's music and a similar tone, this is one prequel that is definitely not trying to distance itself from the original series on which its central character was introduced.

Indeed, this episode includes two other cast members from Breaking Bad and it's certainly been suggested that others might show up. Rather than detracting focus, though, the show does a good job establishing itself as an occupant of the same world, which is something the tonal and stylistic similarities aid in.

For now, at least, Better Call Saul has pulled off the one elusive thing so many prequels aim to do. It feels familiar, and it feels worthwhile. It may not yet be essential television, but it does show an ability to stand on its own aside from Breaking Bad and it puts a lot of evidence toward the notion that seeing Jimmy McGill go from being a broke and out-of-luck lawyer to being Saul Goodman - the fast-thinking but equally unlucky legal pillar of an expansive drug empire - will be a journey worth watching.