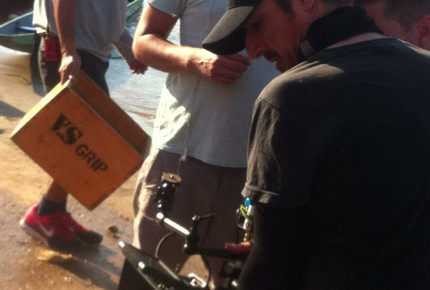 Canada's Jamie Dagg has bitten off a big task for his debut feature. Because, you know, making your first film isn't already hard enough, Dagg's River appears to be the first-ever western co-production with the South East Asian nation of Laos and things are now officially underway with the picture having wrapped its first day of principal photography with Rossif Sutherland - brother of Kiefer and son of Donald, fresh off a support role in Bruce McDonald's Hellions and soon to be seen as the lead of Paul Gross' Hyena Road - in the lead.

In the south of Laos, an American volunteer doctor becomes a fugitive after he intervenes in the sexual assault of a young woman. When the assailant's body is pulled from the Mekong River, things quickly spiral out of control.

Chanthaly helmer Mattie Do is handling the Lao end of the production before moving on to her own sophomore feature, Dearest Sister, with Chanthaly stars Amphaiphun Phimmapunya and Douangmany Soliphanh also featuring in support roles. Nick Sorbara of RedLab Digital takes the lead on the Canadian side of the production. Keep an eye out for proper stills soon but, in the meantime, here's a guy with a camera and another guy with a box. Glamor!

[Full disclosure: XYZ Films represents River for sales partly because I'm proud to consider both Dagg and Do personal friends but mostly because they're really talented and the script is excellent. So, you know, bias.]

Do you feel this content is inappropriate or infringes upon your rights? Click here to report it, or see our DMCA policy.
jamie dagglaosmattie doriverrossif sutherland