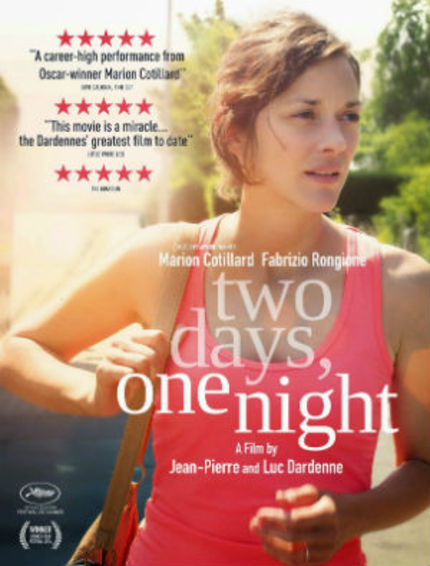 Why did Two Days, One Night work so well for me? It's not easy to explain.

This is especially the case, considering this is my first experience watching a film by Jean-Pierre and Luc Dardenne, and the fact I know nothing about modern-day Belgium's working-class. Given this lack of knowledge, the film is a capsule, a bitter pill of ethical and moral dilemma that simply shows humanity for what it is, for better or worse.

Two Days, One Night throws us into a troubled weekend where Sandra (the always wonderful Marion Cotillard) stresses about convincing her workmates to make a powerful decision. After a bout of depression, Sandra returns from a hiatus to her employment. Her manager and his boss, the unseen Jean-Marc have other plans, however, as on a certain Friday they convince the employees to vote for either a generous €1,000 bonus or her continued employment.

The solar panel factory where she works for makes this harsh choice without fan-fare and in public, where only two employees vote for her. Sandra organizes a secret ballot instead for the upcoming Monday work day, and thus must spend the weekend pleading and making her case to each of the co-workers to get a majority to vote in her favor.

That is about it in terms of plot. The film not only follows this simple premise, it, in fact, becomes repetitive, as Sandra uses the same speech and gleans the same response from her colleagues regarding how and why they want the bonus. Look closer, however, and you can perceive the human condition.

Each working-class member of the society has an entire life behind them and in front of them. They have ambitions, problems, greed, desire, and generosity in their hearts and minds; both sociological and psychological considerations impact and inform their responses. Sandra interrupts their weekend routine, their downtime is stopped, and Sandra becomes an enemy; she antagonizes their precious moments outside of work.

These short appeals by Sandra open up these people to scrutiny. Two Days, One Night captures their responses perfectly, from feeling pity for Sandra to outright hating her or, even worse, avoiding her. The days pass quickly as Sandra fights off her depression and deals with her husband, who tags along and drives her to each abode. Their relationship is like that of any long-term married couple, the passion is gone but love remains, or a kind of kindred comfort, at least.

He feels responsible for her and helps her through the ordeal. Sandra's two children also play in the background, like an added stress on the timer of the weekend, the timer Sandra must get the better of before she is disadvantaged by unemployment and thus reverted back to welfare.

Given the short time frame, the drama and events that unfold are realistically handled. It is a guessing game of support as Sandra relies on faith and these colleagues, to whom she has varied connections. When Monday morning arises, the outcome of her efforts are incredibly handled by the Dardennes, resulting in an almost perfect ending for the film and Sandra's predicament.

Cotillard is perfect as Sandra. Most reviews of the film so far state she is indistinguishable from the rest of the working class; however, despite her plain look, Cotillard's acting is genuine and informed by her phenomenal talent. The perfect cinematography captures and follows Sandra from an angle. Each background shot reveals a diaspora of everyday life, the hustle of community, the buzzing nature and bustling that also informs the sound design. Cotillard is always front and center; her face pained and taut, barely keeping it together as she commits to her active goal of convincing those around her.

Given the small scope of the film, there are big ideas and ideals about humanity in general that play out brilliantly. The Dardennes focus on a very specific community and situation, and in this lens of normality, the results are faultless. I look forward to viewing more films in the Dardennes' oeuvre, as they are truly masters of social-realism.

Review originally published during the Melbourne International Film Festival in August 2014. The film opens today (Wednesday, December) in select locations in the U.S. via Sundance Selects.