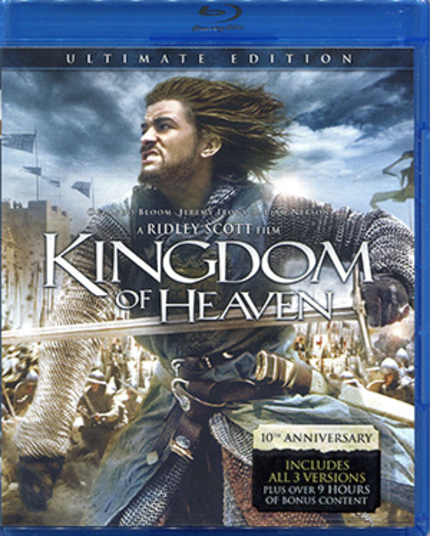 A decade before Ridley Scott brought Exodus: Gods and Kings to the big screen, he tackled another epic about religion, faith and pragmatism. Kingdom of Heaven was Scott's film about the Crusades, a rousing, rambunctious film that tried to be a follow up of sorts to his previous sand-and-sandles epic, Gladiator.

The project itself actually came out of a failed attempt to tell the tale of Tripoli, a potential Russell Crowe starrer that fell into development limbo. Picking up the pieces of that production, Scott secured the services of a then-untried screenwriter William Monahan to abandon the Tripoli script and concentrate instead on the tale of Jerusalem during the Battle of Hattin during the 12th century.

Monahan crafted a lengthy script that told not only the story of Balian, the ostensive lead of the piece, but a rich tapestry of characters and situations surrounding the religious, political and military détente that served as a kind of Oasis during that period in the walled city of Jerusalem.

As the project came to fruition not long after the 2001 attacks in New York City, and right as wars in Afghanistan and Iraq occupied American airwaves, this film that expressed tolerance, sympathy, and a certain cynicism towards organized religion was a hard sell at the cinema for many. The film itself was greatly truncated, with entire subplots involving the infant son of one of the lead characters excised from the release version.

Scott, ever the diplomat, agreed to the cuts knowing that he'd be able to showcase his preferred version on home video. In 2005 he actually did screen theatrical his longer version (with some 45 minutes of added footage), and the "extended Director's cut", an even longer version, incorporated such roadshow elements as an Overture, Entr'acte and Intermission.

An extensive DVD set was released, with many extraordinary supplements including another masterful, feature length documentary by Charles de Lauzirika. CDL is the man behind such definitive editions of Scott's films such as the Alien Anthology and the Blade Runner set, two other discs that showcased longer, more extensive "director cuts" by the ever tinkering Ridley Scott.

When first released on Blu-ray, the Kingdom of Heaven disc dropped these superlative supplements, giving us the film and little else. Now, at last, Fox has released the film with three distinct cuts, as well as a second disc with hours upon hours of supplements. Collectors were forced to keep the 4-disc DVD set on hand in order to have all these tasty bits available to watch.

Now, at last, as part of a "Ultimate Edition" our faith is restored and with release we get Kingdom of Heaven the way it should have always been. All the docs and associated materials from the DVD are ported over, and except for a lovely booklet that was included in the larger set it's all crammed into one simple Blu-ray snap case.

Don't let the relatively pedestrian looks of the release surprise you, this really is a release to be picked up, even if you're not such a fan of the film. The making-of-doc is worth the price alone, as it delves into some very frank discussion of the film and its themes, and (to its undying credit) doesn't shy away from the mixed reception the film had. Unlike many fluff pieces, there's a real integrity to what's presented as part of this work, and like the best supplements from the likes of Criterion these are additional elements that do much to heighten one's appreciation not just of this work and these filmmakers, but the medium in general.

While the docs are presented in Standard Def on the BD disc, they still look a bit better than their DVD counterparts, perhaps thanks to some added bandwidth allotted. With a film running 3hrs14min, and the doc clocking in just under 2 ½ hours, this isn't for the faint of heart. Yet the film proves somewhat fascinating a decade on, freed from some of the contemporaneous concerns surrounding the production and politics.

Just as Exodus is going through whispers about its casting decisions, the ensemble assembled for this film proves to be pretty exemplary, showcasing talents that rise to the level required for such an arch film. With massive sets and literally armies of extras, this is big-time filmmaking that again provides a king of touchstone to Scott's most recent work.

While the film stumbles in terms of its overriding story, trying to be a little too cute with its balance between the sacred and the sarcastic, it's a template for the tone that Scott would set for several other of his films to come.

As you are set to watch his latest film, I highly recommend picking up this title as a kind of Rosetta stone to what he's trying to do with Exodus. Neither Kingdom of Heaven or this latest film are the best of what Scott has offered, but they're interesting companion pieces, and with such rich and exemplary supplements this disc is an absolutely must-add to any collection.