Review: EXODUS: GODS AND KINGS Is Lost In The Wilderness 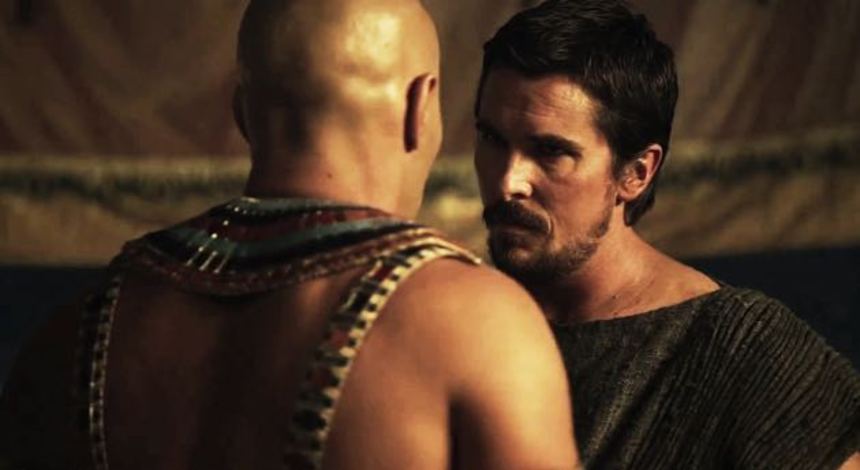 Meeting, but rarely exceeding, expectations, Ridley Scott's grand retelling of Moses and the Hebrews' flight from Egypt is strong on visuals and A-list presence, but slight on narrative and characterisation. Christian Bale and Joel Egerton both put in fine performances as Moses and Rameses, while the rest of the big-name cast gets lost amidst a CG-heavy blizzard of battles, plagues, revolts and muddled imagery.
While Ridley Scott began his career with inquisitive, genre-defining science fiction films, he soon found his stride as Hollywood's go-to guy for epic tales of adventure, revolution and historical derring-do. Exodus: Gods And Kings (which pilfers its sub-heading from a stalled rival production that was at one time to be directed by Steven Spielberg) feels very much cut from the same cloth as 1492: Conquest of Paradise, Gladiator and Kingdom Of Heaven.
Audiences who recoiled from Darren Aronofsky's courageously inventive reinterpretation of Noah may be reluctant to give New Hollywood's Old Testament adaptations another chance so soon, but Scott and his four credited screenwriters prove far more faithful to the biblical texts. A few high-concept gambles aside, Exodus is a pretty standard historical epic, as Moses (Christian Bale), General to the Pharaoh (Joel Edgerton), learns of his Hebrew roots and embraces his role as negotiator of their freedom and leader of the great exodus.
Scott spares no opportunity to show off the sprawling vistas of Ancient Egypt, from the capital at Memphis, to the tombs of Abu Simbel, even opening his film with a bloody clash against the Hittites, in which Moses saves young Rameses' life, thus fulfilling a prophesy the soon-to-be God King is never able to shake. It all looks very impressive through the lens of cinematographer Dariusz Wolski (Pirates Of The Caribbean, Prometheus) but it's nothing we haven't seen before. Likewise, the score from Alberto Iglesias (Tinker Tailor Soldier Spy) lacks personality, and the overall aesthetic feels far too close to other Scott epics to genuinely impress.
Kudos should go to the casting directors, for assembling a fine ensemble of international talent without the script having anything of interest for most of them to do. Admittedly, Exodus and its director has come under fire in recent weeks for the lack of ethnically appropriate performers in major roles, but an article in The Daily Telegraph this week made the interesting point that perhaps the filmmakers should not be blamed, but rather the industry as a whole for not grooming minority talent with the same enthusiasm as their caucasian counterparts.
Aaron Paul, almost indistinguishable due to actually having hair, plays Joshua, Moses' righthand man. Ironically, the Bible described Joshua as spokesman for the socially-inept Moses, but here he barely gets a line. Likewise Sigourney Weaver as Rameses' mother has perhaps a minute of screen time in which to demand Moses' death - for no particular reason. A host of strong women including the incredible Iranian actress Golshifteh Farahani, Spain's Maria Valverde, Tara Fitzgerald and Indira Varma seem to be included just to clarify how the "Gods and Kings" were able to sire children.
John Turturro, as Pharaoh Sr. and Ben Kingsley, as the kind of wizened elder he plays about once every three months, fare slightly better, but best of the bunch is certainly Edgerton's fellow Australian and Animal Kingdom alumnus, Ben Mendelsohn. Almost unrecognisable behind blue contact lenses and braided headdress, his sleazy Egyptian Viceroy proves a suitably oily thorn in Moses' side, and Mendelsohn injects him with enough slimy, sexually ambiguous duplicity to feel right at home in any of the classic biblical epics of the 1950s.
Which brings us to the biggest problem with the film. Exodus is a story familiar to almost everyone. Either they've read The Book, heard it in Sunday School or, most likely, have seen the Charlton Heston version of The Ten Commandments on TV more times than they care to remember. Audiences are already familiar with the power and imagery of what happened, leaving Scott in something of a creative "catch 22". If he chooses to break with tradition and reinterpret events in a new way - as he does most emphatically with the Burning Bush sequence - he is likely to incur the wrath of dedicated nostalgic, possibly Christian, audience members. However, if he plumps for a loyal retelling of events we've all known since childhood, it barely seems worth spending $140 million on.
Perhaps for this reason, the film's best moments are also its most outlandish: an insane crocodile attack on a fishing boat; Moses finding his faith while up to his neck in mud; the climactic parting of the Red Sea; Ben Mendelsohn all but offering Moses sexual favours if he can keep his palace. Indeed, some of these decisions make you question just who Scott believes his audience is for this film. When it comes to depicting the succession of plagues unleashed on the Egyptians, however, the film opts to explain the frogs, locusts, blood-red water etc. with something approaching a realistic chain of events. He even goes so far as to have the Pharaoh's minions explain it to him. These moments reveal a conflict between realism and fantasy that Scott never manages to reconcile.
For the most part, Exodus: Gods and Kings succeeds in recapturing the spirit of classic sword and sandal epics, by going all-out in its spectacle, and employing top-notch actors in its two central roles. But Scott has used this tactic all-too-often and not enough here really stands out from his other historical epics to make it truly memorable. Add to this a fumbled epilogue that utterly wastes the appearance of the ten commandments tablets and the ark of the covenant, and you are left with a modern-day biblical epic with no clear message and a notable lack of faith.
Sign-In to Vote
Tweet 0 Submit

"Kudos should go to the casting directors", LMAO!!!

and on top of saying basically there are no good minority actors o.O wowzers.

Joshua wasn't Moses' spokesman, but his brother Aaron was.

Exactly! Even those terrible Mummy trilogies looked more authentic than this lol

Oh right, well that guy has no lines either.

It's amazing how many errors this copies from other films. Prince of Egypt had the same lack of Aaron.

I'm learning that there is no historical basis for the enslavement of Jews by Egyptians or a mass exodus of Jews from Egypt. This is like demoting Pluto from planet status!

Radically different than prior versions of this story Exodus brings great shame to a magnificent biblical saga. Scripted to deviate from prior incarnations Exodus wanders through a series of sequences looking for a story that never develops. With horrible acting and poorly designed back lot sets the audience is degraded as the movie unfolds. Christian Bale should have remained with the Batman series instead of sullying himself with this dreck of a film. John Turturro plays Seti, ruler of Egypt and beyond. He should have stayed in Brooklyn making bagels in Transformers. God has been diminished to a tertiary role, which will make all atheist viewers happy. To reveal these sequences would spoil a film that spoils itself. As the cast moves from scene to scene the thousands of extras appear disconnected from the director's cues. For biblical purists I am still searching for a scene that comes near one event as originally told in this great work. Charlton Heston, the renown Moses of the 1050s, would have laughed off this script if offered to him. In a sense we have one of the best biblical tales treated to some of the worst Hollywood has to offer. My vote of 5 out of 10 is stated not to offend the acting of the mass numbers of extras. At nearly 2 hours and 30 minutes this film is 2 hours and 30 minutes too long.