Review: THE OVERNIGHTERS, A Shattering Experience 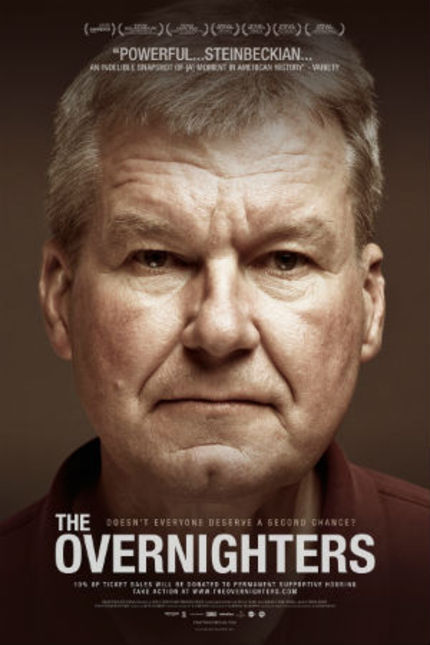 It's a rare and beautiful thing when a film can surprise you.

I was taken completely off guard by The Overnighters, a film that I figured would be a stark if a bit earnest take on post-recession America. What I was not prepared for was such a nuanced, sophisticated take that tackles the very core notions of community, responsibility, and compassion, and how they are reflected by varying notions of just what it means to be a Christian.

The core of the film is the following of a pastor in the boom town of Williston, North Dakota. Fracking has created an economic bubble and like waves of other booms in the US, men from all over the country have left their communities and support structures to come and make a buck off the natural gas industry.

This is a land where your record can be wiped clean, where demand for workers is so dramatic that questions of your past aren't on the job application. There is a baptism here in the Christian sense; the notion that in this time of prosperity, what counts is your capacity to repent and to move forward with a good heart and a good attitude.

Spreading this gospel is Pastor Jay Reinke from the Concordia Lutheran Church. Taking biblical precepts about being a succor to one in need and the admonition to help out the community literally, he uses Church resources to provide housing to those streaming in looking for work. We see men coming to terms with their former struggles, only to be illuminated by the grace and radiant humanity coming from the charitable Reinke.

It seems that his only motivation is to do good unto others, and we're blessed to see these moments play out. We meet the men that find rest and support in his church and experience his charity. We feel good about the word and we're comforted in seeing good deeds done unto others for the benefit of all and with the help emerging from the small kind acts of strangers.

And then everything changes.

For this is no fairy tale; no commercial for a beatified preacher and his itinerant flock. The less one knows about what transpires, the better, as a filmgoer, the emotional roller coaster will be. I can only compare it to the likes of the great films by the master Errol Morris, a director who consistently manages to both shock and surprise, to have the reality of his film subvert our very expectations of what we were going to be seeing going in.

Director Jesse Moss and his team have done a near miraculous thing, keeping even keeled and probing without ever resorting to bombast or overt advocacy. It's one of those morally complex tales that leaves you churning inside, grasping with the very real-world issues that are brought forth. We see in this film humanity at its best and its worst, but see it for what it is, a gradient on which at any given time man can be judged as doing good or ill.

For what begins as a almost story-book fantasy of religion and charity becomes nothing more than a spiderweb of conflicting actions and desires. The film gracefully draws the viewer along, dropping hints about whats to come but never teasing or telegraphing its intentions.

The Overnighters will surely be a litmus test for some; a way of either justifying their own beliefs or admonishing others as being either hypocritical or even sociopathic. It's easy to draw stark conclusions based on one's own beliefs, but the film continuously erodes any feelings of orthodoxy towards a given position. What the film demands is a kind of ethical dexterity, urging the viewer to look deeper and deeper so that the issues raised aren't merely slogans or platitudes. Life is messy, and idealism is more often than not simply a shield for what lies beneath, obscuring the heart of the matter in all its complexities and contradictions.

With justice, this is a film that will find an audience from all sides of the political spectrum. They will see the truck with the anti-socialism sign sitting in a parking lot, its occupants receiving community assistance, and may just for a moment question their steadfast positions. They may also see the genuine cause at the heart of the church's mandate, a kind of pure Christianity that adheres to the words of Jesus, the one who hung out with vagabonds and whores and say in all a kind of grace. This bifurcation of right and left, of charity and conviction versus responsibilities and honesty, of the motivations to do good and putting oneself forward as a moral guide, all serve to create this heady mix of life, love and betrayal that this film documents.

The Overnighters is a shattering experience; a masterwork of unbridled honesty as it delves into the messy ambivalence of regular lives. Easily one of this year's best documentaries, it is both provocative and unsettling, energizing and immensely sorrowful. It is an exceptional, haunting film, and one not to be missed.

Review originally published during the Sundance Film Festival in January 2014. The film opens at the IFC Center in New York via Drafthouse Films on Friday, October 10, and will subsequently open in limited theatrical release. Visit Drafthouse Films for more information.