Fantastic Fest 2014: CUB, A Campfire Story That Fizzles Out 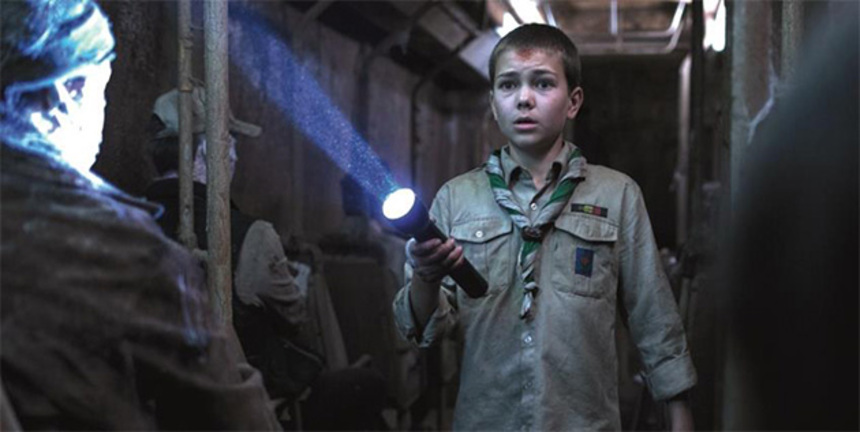 Cub is another of those genre films that has a terrific premise, some really nice moments, but overall comes across as pretty flat and uninteresting.

The story begins when a group of cub scouts are led out into the woods for a camping retreat. As is the case whenever a bunch of young adults are put in charge of adolescents, the kids are treated to things that'll mess them up - namely, stories of Kai, a creature that lives in the woods and likes to harass campers. This amusing diversion turns out to be fact, as a young masked individual (think a very short, shirtless kid dressed as Groot) starts making havoc in the camp site, resulting in conflict, drama, and eventually death.

The story's ingredients are pretty cool - you've got some creepy guy living in the woods, setting up elaborate booby traps in order to mess with those invading his territory. There's also some overt playfulness about the division in Belgian society between French and Flemish, with the track-suited Frenchies portrayed as particularly douchey. Young Sam (Maurice Luijten), the 12 year old kid with a troubled past, does well to try an inject a spirit of River Phoenix into the film, a scowling youth that knows better than his hapless leaders.

The woods play a great role in setting mood, and some of the contraptions are both creepy and effective. Yet it all seems to go nowhere, the ending both predictable and free from any real catharsis. It's as if all the pieces are in play, but the game never really comes together, trading cheap shock tactics in favour for a richer, more sophisticated narrative.

When the proverbial shit finally does hit the fan, you're left not really rooting for anyone, as the film lazily employs cliché after cliché, executing most of what had come before in favour of a bleak conclusion that manages to be both predictable while at the same time being kind of incoherent.

If it was just tripe it'd be easy to simply forget this film, but Cub is even more frustrating as it seems that it really could have been something special. In the end we're left with a simple, spooky campfire story that quickly fizzles out.